The role of the library in the first years of II&C’s development is instrumental to that “&,” and in turn, to the philosophy and curriculum of the college: to provide a liberal arts education AND vocational training to women.  Indeed, as the purpose of most academic libraries stands, the story of the library—which was not built until several years after the founding of the college—is congruent to the story of the university.  Looking at the dynamic and sometimes tumultuous history of the then II&C, then MSCW, and finally MUW, the library parallels its story of persistence and resilience in order to serve the mission of the college: to education women in Mississippi, even against cultural and political odds.

Early Years: Building a collection for the II&C

According to the II&C’s First Annual Catalog, 437 reference books started the collection of the college’s first library, which was housed, not in a separate

building, but above the kitchen area in II&C’s Main Hall. Students and faculty donated their own money and resources to help build a usable library. The II&C’s first library was open to “trustees, members of the faculty, officers, post-graduates, and students,” and it was open for irregular hours during the week for two hours at a time and on Saturday for four hours. Reportedly, early II&C students “pour[ed] over the limited number of library materials in a cramped room above the kitchen . . . while heat and fumes rose from below.”

Efforts of dedicated students and faculty, namely the members of the Callaway-Orr society and the Peyton Literary Society, whose motto was “We study for light to bless with light,” brought the library some additional 200 volumes between the years of 1890 and 1985. The beginnings of the small collection were meager, and while the space and the materials themselves did not entirely accommodate the needs of the students at this juncture, some made several small efforts, spread over the college’s first twenty years, to improve the collections. 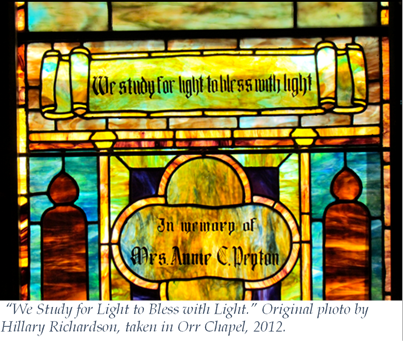 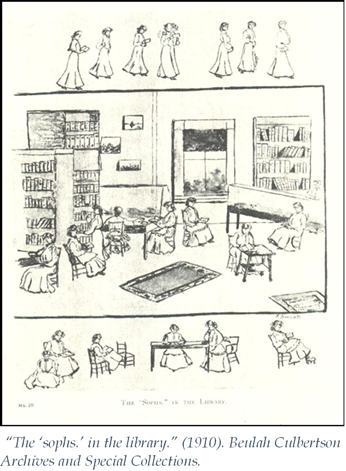 The Library Building: A Place to Read and Study at MSCW

In 1923, President John C. Fant advocated for funds for a new library building that could comfortably house both materials and students. Fant thought that the library ought to be a physically impressive space at the center of the university, and this was apparent when construction began in the 1929-30 school year.  The new library physically and ideologically opposed the musty room above the kitchen in Columbus Hall.  The three-level building contained a reserve reading room with enough space for 200 students, two periodical rooms, librarian offices, a reference room, and stacks that planned to hold 90,000 volumes.

Head Librarian, Beulah Culbertson, also contributed to the library’s growth starting during Fant’s administration, and continuing long past his death. Under Culbertson’s library administration, which spanned over more than four decades (from 1912-1958), the Fant Memorial Library grew substantially.  By the time Culbertson retired in 1958, the library had approximately 103,503 volumes and 547 serials. The University Archives and Special Collections are now named for her dedication and service. 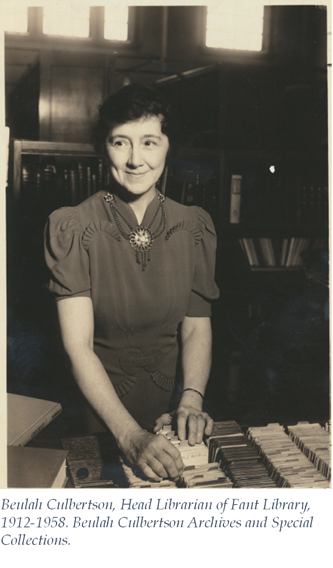 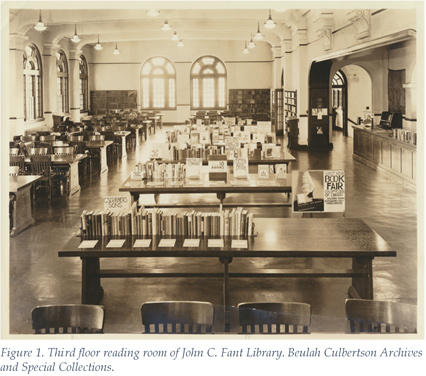 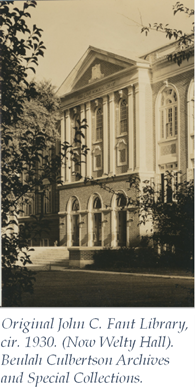 Transitioning from the 20th to 21st Century: MUW

Since the old library building was constructed in 1929, the collection has grown from a rather short list of books and serials to an extensive number of books, government documents, microfilm, print and online periodicals, database holdings, archival manuscripts, ebooks, digitized archives, and more.  A new building was constructed under President Charles Hogarth’s administration in 1969, and the new wealth of materials was moved from the old library to the new building during the holiday break in 1970. 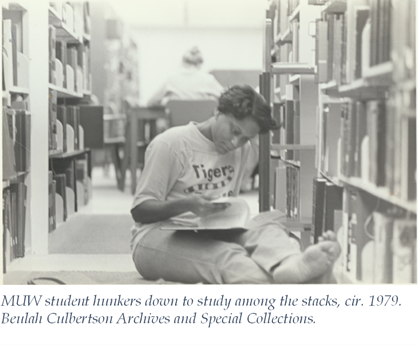 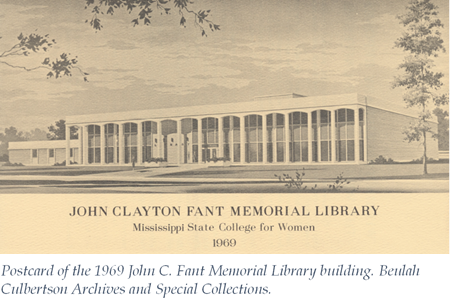 Planning for renovations to the 1969 building began in 2008, making it the last university in the IHL system to receive a library renovation. The new plans proposed to accommodate the library’s student and community populations until 2028 and took into account the growth of the student population, collections (digital and print), and emerging reference and information technologies.  The tradition that started with Dr. Fant—to make the library a welcoming, inhabitable environment—has continued with the new space, creating “an active space alive with intellectual inquiry and the movement of users and staff . . . designed to convey an inviting sense of warmth, orientation, and organization.” An exciting feature to the 21st century building is the only Automated Storage and Retrieval System (ASRS) in the state of Mississippi, which the students voted to name “Athena” in the spring of 2017. Other updates to the building included expanded rooms for digital learning, collaboration, and a Center for Teaching and Learning to promote and support MUW faculty.