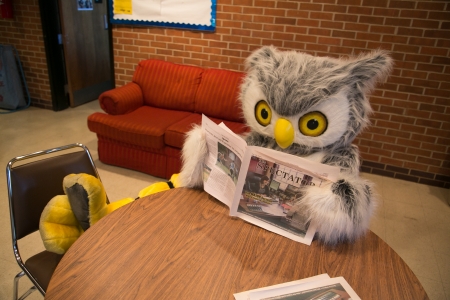 Ody is the official mascot of The W. In 1982 the students of the new Mississippi University for Women were looking for a new mascot to replace Missy Deer. After winning the women’s national basketball championship in 1971, the students felt the large-eyed deer with a yellow ribbon around its neck wasn’t intimidating enough for intercollegiate athletics. So after a decade of debate, Martha Fulton Wells, a faculty member, suggested a new mascot. Based on the comic strip's popularity, Garfield the Cat was overwhelmingly selected as the mascot. The university asked the creators of the comic for permission to use the character, but were denied. A committee was created to develop a mascot for the university. Consensus was to use an owl as the mascot.

Ody is based on the terracotta owl which has been perched atop Orr hall since 1885. The owl is a classic symbol of wisdom, associated with Athena, the Greek goddess of wisdom. The name Ody is derived from Emma “Ody” Pohl, the former Mistress of Physical Education at II&C and later MSCW, for more than 50 years. A legend on the campus, both for her style and her strict adherence to the virtues of physical fitness, Miss Pohl was the ideal spirit to embody the mascot of the university.

Since 1982, Ody has cheered on the university and supported the students that grace its halls, as well as keeping a watchful eye on the campus.

Q: What type of owl is Ody?
A: Ody is a Great Horned Owl, Bubo virginianus, identifiable by the tufts on the head resembling horns.

Q: What gender is Ody?
A: Ody is neither male nor female. Ody is Ody. We don’t worry too much about what gender Ody is. Ody won’t be offended if you use he, she, or they; all are correct.

Q: What does Ody eat?
A: Pizza mostly.

Q: What is Ody's favorite color?
A: Blue, of course!

Q: Can Ody come to my event?
A: You can find out more about the guidelines for appearances by Ody on the Appearances page.

Sources:
Loyal Daughters: One Hundred Years at Mississippi University for Women, by Bridget Smith Pieschel and Stephen Robert Pieschel, 1984.
Legacy of the Blues: A Century of Athletics at The W, by Dorothy Burdshaw, Barbara Garrett, Jo Spearman, Joan Thomas, and Martha Wells, 2012.