Take a tour in person 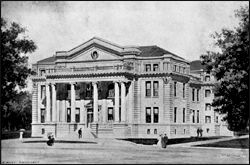 Originally called simply the Music Hall, or the "Temple of Music" as residents of Columbus dubbed it, Poindexter Music Hall was built in 1905 to house Weenona Poindexter's ever-growing music department. It was designed by Chattanooga architect R. H. Hunt, architect of several other buildings on campus and throughout Columbus. It is one of The W's 23 buildings on the National Register of Historic Places and is listed as a Historic Landmark of the State of Mississippi.

Poindexter is considered by many to be one of The W's most beautiful buildings. It is a somewhat unusual structure - despite the front and rear wings' equal elevation height, the front wing houses three floors while the rear houses four. 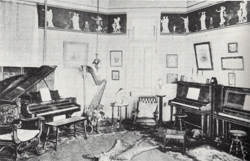 Its north entrance is flanked by six imposing Ionic columns, and the entire building is characterized by elaborate moldings, cornices, and pilasters. The auditorium is a large oval-shaped space containing an elaborate cornice with egg and dart molding resting on paired Ionic pilasters. The auditorium's original oval skylight remains; however, it has been painted and covered. Poindexter Hall is the subject of many landmarks in The W's history as well as many delightful stories.

In 1905, Miss Poindexter used her own funds to bring the famous pianist Ignace Paderewski to the Music Hall for a performance. The event was such a success that a $1,000 profit was made. Miss Poindexter used this money to start a fund to bring other famous performers to campus as part of the university's first unofficial lyceum series. 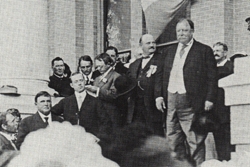 While on campus, Taft showed his support for Mississippi University for Women's mission (then known as Industrial Institute & College), saying, "A girl has the right to demand such training that she can win her own way to independence, thereby making marriage not a necessity, but a choice."  Much later, Vice President Dick Cheney would speak from the same steps on October 28, 2003, noting, "it's great to be back in a great state, and have an oppotunity to visit The W."

During the Great Depression, faculty members were allowed to live in several of its small music rooms. 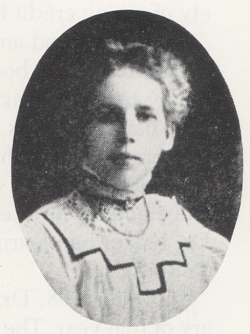 In 1945, Miss Poindexter retired after 50 years of service to The W's music department. Consequently, in 1947 the Music Hall was renamed Poindexter Music Hall in her honor. In 1953 during a fire that nearly destroyed neighboring Shattuck Hall, Miss Poindexter rushed from her home across the street and into Poindexter Hall out of fear firefighters were not doing enough to save "her" building.

Now, entering its second century, Poindexter Hall will continue to shine as one of the most well-known and beloved jewels on The W's campus.

In 2007, as Poindexter Hall reached its centennial, the Mississippi Legislature appropriated $9.5 million in bond funds to restore the Temple of Music. In 2009, renovations began. Miss Poindexter’s hall would not only be restored, it would be fitted with the latest energy efficient materials and a state-of-the-art digital energy management system.

We encourage you to walk the halls of Miss Poindexter's hall and with your continued support of the Music Department, Mississippi University for Women will be able to produce musical talent worthy of Miss Poindexter for generations to come.

Information taken from Loyal Daughters by Dr. Bridget Smith Pieschel and Stephen Robert Pieschel. This article was originally published by the MUW Foundation in 1999 and updated in 2012 for the Grand Reopening of Poindexter Hall.