Message From the President - Fall 2019 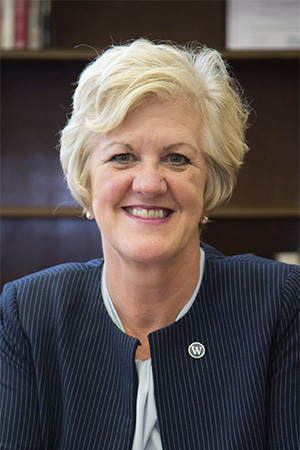 I always enjoy the fall semester and welcoming new and returning students, as well as faculty and staff . There is a lot to celebrate, both in academics and athletics.

In this issue of Visions, we are excited to announce Dr. Scott Tollison as provost and vice president for academic affairs. We are fortunate to have him in this role and look forward to his efforts in advancing academic affairs and enrollment growth.

We also celebrate excellence in teaching with the naming of Dr. Erin Kempker, chair of the Department of History, Political, Science and Geography, as this year’s recipient of the Kossen Faculty Excellence Award.

It was just three years ago that we unveiled The W’s new athletic logo and Jason Trufant was hired as the university’s athletic director. Since that time, we have reached some major milestones—too many to put on paper.

Coaches, with assistance from their support staff , have recruited tirelessly all over the region and country to attract high quality student athletes to The W. To date, we have 17 sports, which enroll approximately 214 students.

Key to growth of the program has been affiliation with athletic associations that have allowed competition against a host of schools. In 2017, The W was added as a new member of the United States Collegiate Athletic Association, with the fielding of The W’s first intercollegiate athletic teams since 2002.

In March 2019, the athletics program was accepted as a provisional NCAA Division III member, a division that also includes Millsaps College and Belhaven University in Mississippi. The three-year process of becoming a full Division III member should be complete in the 2021-22 season, opening even more opportunities for The W’s Owls.

Division III is NCAA’s largest division in terms of both participants and number of schools. A focus of the division is academic success and degree completion, closely aligned with The W’s strategic goals.

During the fi rst year of its association with USCAA in 2017-18, the baseball and softball teams earned fi fth-place rankings at the association’s Small College World Series. And, that proved to be just the beginning. In 2018-19, the women’s basketball team won the USCAA National Championship in Uniontown, Pennsylvania, with a 69-46 victory over Maine-Fort Kent. The softball team earned a third-place finish in USCAA’s Small College World Series, with the baseball team finishing in fifth.

Men’s golf finished third in the nation in the USCAA national tournament as well.

As you will read in this issue of Visions, there have been major accomplishments and there are major plans on the drawing board for the future of athletics. There is a new, rich dimension to campus life at The W and the Owls are proud to be part of it.