A Virtual Tour Through History

As a history major, Lauren Harmon knew The W became the first public women’s college in the United States when it was established in 1884. But the Brandon native wanted to dig deeper and to explore the stories behind the school’s evolution. Her goal was to showcase The W’s tradition of excellence and to connect its newer and older generations.

The result of Harmon’s work is a virtual walking tour of The W that uses oral interviews of alumnae to build a unique narrative of campus from the perspective of former students. The work, which is focused on interviews from Golden Girls and the women who desegregated The W, was part of Harmon’s yearlong honors research project that each honors senior completes in their last year at The W. The tour covers 1926 to 1969. 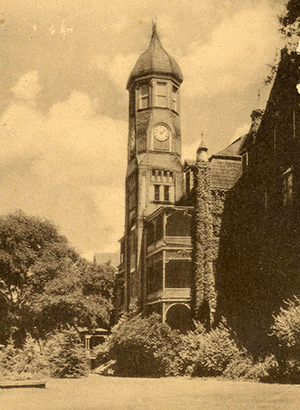 “I wanted people to know how interesting The W is,” said Harmon, who received a bachelor’s degree in history in May. “This goal motivated me even when I was frustrated with the project. I was inspired to share these stories that had been hidden for so long.”

Harmon said her future goal is that the tour goes on to include The W’s more recent history, which includes when the first men were admitted to the school in 1982.

She thanked her honors committee of Dr. Erin Kempker, Dr. Chanley Rainey and Hillary Richardson for their help with the project, along with the Ina E. Gordy Honors College and its director, Dr. Kim Whitehead.

“Lauren’s Honors project reflects her love of The W and her amazing attention to detail,” Rainey said. “In everything she does, Lauren insists on perfection, and when she decided her project would be a walking tour celebration of our university, we all knew the institution would benefit from the discipline and focus she brings to her work. The finished project is fantastic, and I hope The W will be able to make it a permanent part of the website and campus tours. I, for one, can’t wait to use it to introduce new students to The W.”

Harmon said Kempker suggested she talk to Dr. Bridget Smith Pieschel, the former director of the Center for Women’s Research & Public Policy, to plunge deeper into The W’s history. Pieschel had conducted interviews with alumni each year at Homecoming for more than a decade, and together they searched for the transcripts and audio. Harmon said the concept of the tour came about quite quickly because she wanted to showcase the voices in a unique way.

Harmon added she had to process them and enter them into a collection at the Beulah Culbertson Archives and Special Collections. She worked at the archives, so she had to scan the transcripts and digitize the audio.

Pieschel, who wrote “Loyal Daughters: One Hundred Years at Mississippi University for Women, 1884-1984” and “Golden Days: Reminisces of Alumnae, Mississippi State College for Women, 1926-1957,” received her bachelor’s and master’s degrees in English from The W. In May 2020, she was awarded emerita status after she retired following 39 years at the university.

“Lauren is one of those students who showed immediate interest in the history of The W from the time she enrolled,” Pieschel said. “It is not surprising that the culmination of her final year — her Senior Honors Project — adds significantly to the body of work about our institution. Lauren has an original mind and a scientific attention to detail.Her project reflects both of these characteristics. It is wonderful.”

Kempker said the detail-oriented nature Harmon showed as an intern for the Journal of Mississippi History and Merge, The W’s Undergraduate Research Journal, served her well in the time it took her to complete the project. 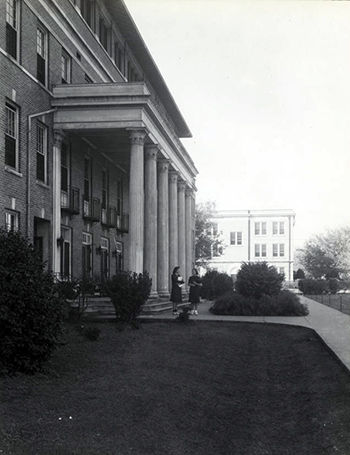 “Lauren is one of the most hard working and methodical students we’ve had in history at The W in the last decade,” said Kempker, who also was Harmon’s adviser. “She is mature, selfdirected and professional and will be an incredible asset to whatever institution, archive or school that hires her.”

Harmon said Richardson, the undergraduate research coordinator and information literacy librarian at The W’s Fant Memorial Library, helped her find digital humanities sources, while Kempker and Rainey helped with the historical side.

Richardson said Harmon researched other projects, professional literature and theoretical arguments about the underlying goals of digital humanities projects. She said Harmon overcame all of the challenges associated with the project, including completing it during the COVID-19 pandemic.

“Lauren is one of the most determined students I’ve worked with,” Richardson said. “I’m proud of her hard work and really impressed with how it turned out.”

Harmon admits the project isn’t perfect, but she said she enjoyed navigating the learning curve to complete it. She said writing a paper also was a part of the honors research project, but she said the virtual walking tour and the audio component were more interesting.

Harmon said writing the script for the walking tour “was more freeing than writing the essay” because she didn’t believe there was a “correct way” of doing anything.

Harmon hopes the virtual walking tour and the audio accompaniment give life to The W’s history and help people put names to the stories. She feels the tour gives new and current students an opportunity to connect with the older generations so they can have a better understanding of The W’s tradition.

“The alumnae voices present stories that most people, especially newer students and the public, would not know,” said Harmon, whose paper for her History Capstone, “The Forgotten Gender of Crime: Female Criminals in Lowndes County, Mississippi, 1900- 1920,” received the Best Paper Award for the Mississippi Phi Alpha Theta Conference. “The W has presented its history many times. However, I wanted to present a history that had remained hidden for so many people. I hope this tour sparks people’s interest in The W, giving them reasons to investigate further into the university.”

Harmon’s goal is to complete an advanced degree, but she hasn’t decided between history, public history, law school or other possibilities. Kempker encourages anyone with a job opening to contact her.

“Her honors project reflects her keen interest in The W’s history and in connecting alums today with alums of the past,” Kempker said. “As someone who served as an interviewer for the Golden Girls Oral History Project, Lauren wanted to do something to make those interviews available to students and show current and prospective students what the university has meant to those who lived here before them.

“The resulting tour speaks to her facility with archival sources and ability to weave the sources together into a compelling story.”