For the College of Nursing and Health Sciences, excellence starts day one.

No matter a student's chosen major, the goal is the same—a thriving, productive, professional, critical thinker. 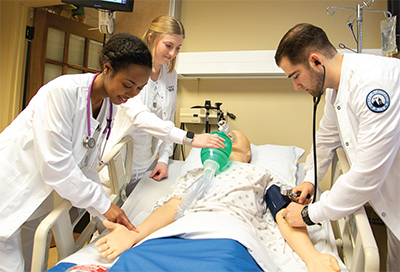 Faculty and staff begin role modeling immediately to each student through advising and classes.

The process continues into clinical and internship settings until each student reaches their professional setting.

The hard work of the faculty, staff and students inside the college has not gone unnoticed.

Early in 2020, The W’s nursing program was ranked No. 1 in the state by RNtoBSNProgram.com.

Rankings for the “Best Nursing Schools in Mississippi in 2020 (On-Campus & Online)” were determined by cost, NCLEX pass rate and the number of nursing programs offered by each of the 22 schools examined in the state.

The W was identified as one of only two nursing programs in the state with a 100% passing rate for the NCLEX exam. The NCLEX is a mandatory exam that each nursing graduate must pass to become a licensed nurse.

The site also acknowledges that The W offers its students a well-rounded education because of the many routes offered in the program.

In 2019, The W’s ASN, RN-to-BSN and BSN programs were named top in the state by Regeristednursing.org.

For the “2019 Best RN Programs in Mississippi” ranking, the site analyzed Mississippi’s 23 programs. Receiving a score of 99.41, The W was recognized as a home to excellent nursing degree programs, which included the university’s associate and bachelor degree routes.

“Nursing students learn to integrate clinical excellence with advanced practical concepts to advance the nursing profession. Students also get the benefits of a dedicated Nursing Learning Resource Center and the guidance of experienced faculty,” stated Registerednursing.org.

To develop the ranking, the site examined the university’s NCLEX-RN pass rates for the past five years with the more recent passing rates weighting more.

The online ranking recognized the RN-to-BSN program for excellence, affordability and the online format while also highlighting that clinical experiences that woven into the online curriculum for immediate absorption by students.

To establish the rankings, the site analyzed accreditation, online options, tuition and fees and graduation rates.

Not only has The W’s RN-to-BSN program received statewide recognition, but garnered regional and national attention.

Ranked No. 8 in the nation, and awarded the Best in the South, the website assessed 1,604 accredited colleges and universities and selected Mississippi University for Women based on curriculum quality, graduation rate, reputation and post-graduate employment. While many awards and recognitions are based on course delivery, clinical experience and other academic-based criteria, The W’s College of Nursing and Health Sciences continues to thrive and lead the way in community service and outreach.

The W’s Student Nurses Association was awarded the “Nightingale School of the Year Scholarship” from the Mississippi Association of Student Nurses (MASN) in 2019. To receive the award, SNA submitted a portfolio or a scrapbook of previous community service opportunities.

The submission highlighted a campus-wide suicide awareness walk, volunteering for the annual Joy Prom, a medical mission trip to Kenya and promoting healthy living and safety to local schools. The portfolio was dedicated to Russell King, a 13-year BSN faculty member who passed away in 2019 after a battle with lung cancer.

The SNA students received a $1,500 scholarship award that will go to future student scholarships and community projects. The idea of impacting the community doesn’t stop at graduation. 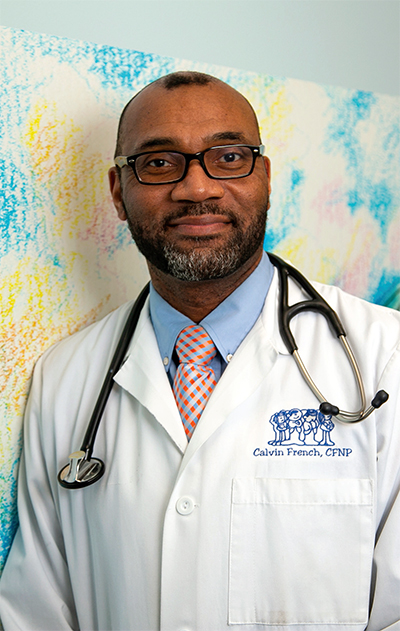 For Dr. Calvin French ’02, ’09, ’17, The W launched a caring and family-focused young man into a profession where his compassion and caring would be accessible to a new community.

As a teenager in Amory, French cared for his grandmother, Adra, who had suffered a stroke and his grandfather, Lucian, who was legally blind. After high school, French passed up a basketball scholarship to Itawamba Community College in Fulton and went to work to support his wife, Barbara, and first child, C.J. After very short time at a furniture factory, French became a nurse’s aide at Gilmore Memorial Hospital because he had cared for his grandparents and he enjoyed it. One perk of the job was the hospital would send people to school in return for them agreeing to be an employee at the facility for a set amount of time. French enrolled at The W.

From the first day, French said he had interpersonal relationships at The W.

Professors always told him, “If you need anything, you can come to me. If you have any difficulties or if something is going on, let me know.”

From the “strict professor” to the “convincing professor,” the nursing program at The W seemed to have answers for all of French’s needs as a student.

In June of 2019, French was awarded the Nurse Practioner State Award of Excellence from the American Association of Nurse Practitioners for the State of Mississippi. He received the award on his birthday.

“The way I took care of my grandparents is the way I want to take care of everybody else,” French said.

“That is the way I look at my patients. They are not just a number. It’s like taking care of family. That’s the passion I feel got started there. It has propelled me to go to the next level.”

The W’s nursing programs aren’t the only departments being recognized as a leader in the state. 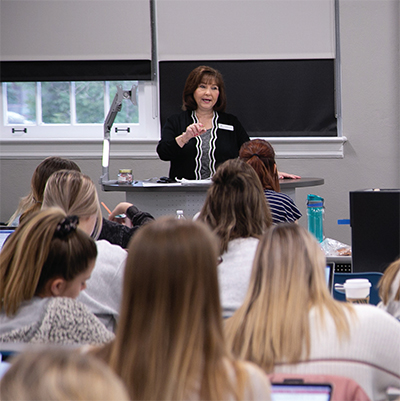 The award recognizes an individual who has selflessly promoted excellence in clinical services, supervision, research or some other form of enriching their clinical practice.

In September 2014, Hanson brought her own passion for dyslexia awareness and treatment to The W to help debunk myths about this disability, educate her students and meet a need to serve the surrounding area.

The university began offering assessments and therapy for dyslexia, which was previously not available within a 75-mile radius. Hanson brought her knowledge of best practices and state law and regulations to assist in the startup of the dyslexia testing initiative.

“I am passionate about dyslexia awareness because dyslexia affects at least 10 to 20% of the population and has such an impact not just on academic performance, but on self-esteem and career choices. I want to be able to give children and their families an explanation and a solution to their struggles with reading and spelling,” said Hanson.

“I want students at The W to learn how to recognize the characteristics of dyslexia and be able to give evidenced-based and accurate information about this common learning disability,” Hanson explained.

Since 2014, she has conducted more than 65 phone conferences with parents regarding dyslexia characteristics and approximately 30 evaluations for clients from ages of 6-72. Hanson described this as her most meaningful achievement.

The MSHA recognized Hanson for the time and care she dedicates to teach her students client rapport and appropriate therapy techniques. Additionally, she shares her rich dyslexia knowledge with students through a variety of courses, lectures and hands-on learning.

The organization highlighted Hanson’s previous work with a client who was 72- years-old and illiterate. She oversaw and implemented an appropriate evaluation and treatment plan for the client.

Following the intervention, the client was able to read birthday cards from his children and his grandchildren for the first time.

But, not all recognitions are shaped as trophies, certificates and badges.

Many times a smile to a face is enough.

In 2017, five-year-old Lily Hood arrived at The Speech and Hearing Center campus speaking only a few words and communicating through motions and tugs at her mother’s hand.

In 2020, Lily has become acclimated to an augmentative and alternative communication (AAC) device that allows her to use an additional 40 words to her much improved verbal communication.

Consider the smile of educational and community leader Dr. Alma Turner, principal of the Demonstration School from 1985-95. For Turner, 2020 began with a loss of words when the newly renovated and repurposed demonstration school was named in her honor. The completed $8.2 million expansion and complete renovation will allow The W’s Speech-Language Pathology program to grow enrollment, increase community services and continue to make an impact.

Whether in the classroom, a doctor’s office or in their living rooms, students and community members alike feel the impact daily of award-winning faculty, programs, alumni and university. Some awards may bring trophies and ceremonies while others bring a better quality of life. To quote Dr. Tammie McCoy, “It all starts day one.”