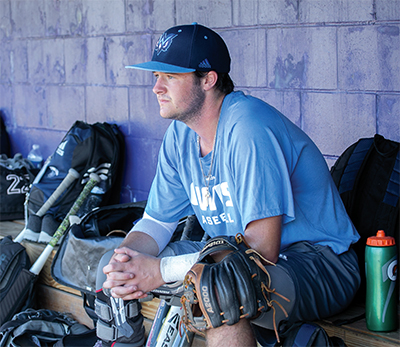 It was a home game and the Owls were up by one in the bottom of the third inning.

Owls third baseman Logan Suggs had advanced to second base. Checking the Blue Mountain players around him, he took his lead, clear from the second baseman, clear from the shortstop. With no pick-off move, the pitch was delivered to the plate. Suggs was already on the way to third base. The ball was hit to the absolute worse place.

“There was a six-inch gap,” said Suggs. “Anywhere else it doesn’t happen.”

Suggs hustled only to find the ball and the Blue Mountain third baseman waiting for him. To avoid the tag and the out, Suggs slid into the base and heard a loud “pop.” He might have been safe, but his first thoughts were, “Did this just really happen?”

Immediately Suggs knew what happened and self-diagnosed a torn anterior cruciate ligament (ACL). His worst fears were confirmed the next day and he would have surgery in the weeks following. His expected time of recovery was nine months.

Upon his diagnosis, Suggs admits he was overcome with emotion. He was furious, sad and frustrated. The injury really took a toll on him mentally. With 21 plate appearances, the sophomore held a .421 batting average and scored nine runs. He had started two games on the mound and pitched 11 innings for a 1-0 record. Suggs was contributing to his team in every way-offensively, defensively and on the mound. He would soon discover new ways to support his team.

“The season for me started really well. I was having a great year. Then I tore my ACL and ended up missing half the season. It was hard to watch after that. I wanted to help the guys,” said Suggs.

The obvious question for Suggs was, “Where do I go from here?” The answer was just as obvious for him-the field.

During scrimmages, Suggs would coach third base and practice for his dream job. He gained coaching experience and simultaneously allowed Coach Matt Wolfenbarger and Coach Cody Allsup to work more individually with other players.

“He really got into it. He was giving signs and telling players to steal. He was helping the best way he could without stepping on the field,” said Wolfenbarger, Owls head baseball coach. “Between the surgery and rehab, I still made it to the field every chance I got. They were still my team, still my brothers and I wasn’t going to leave them hanging,” explained Suggs.

The team that Suggs had supported soon began supporting him. They would tell him, “Don’t rush it” and “We need you next season.” As hard as it was to watch, he discovered relief in his teammates. His frustrations disappeared and his pain eased when he watched his brothers enjoy the game.

To Suggs baseball is a teacher of life. There are ups, downs and in-betweens. Through his injury and teammates, he discovered learning moments.

“There are so many different circumstances that come into baseball that teach you about life. I had the opportunity to see others succeed. I could help others on the team. I could say this is what I see from the dugout. You can’t see this while you’re out there,” said Suggs.

There was a constant two-way street of picking each other up.

Players would come off the field and ask Suggs what he saw or his opinion on a player or play. To Suggs, this made the biggest impact on him during the recovery process. The brotherhood of the team lifted him and brought healing.

Wolfenbarger described Suggs as an intense competitor and teammate who strives to get better every day. Whether he was injured or not, the coach always saw him contributing to his team. He still traveled with the team and did not let the dugout die no matter the score.

Wolfenbarger perfectly described his competitive nature and intensity by recalling moments after Suggs’ injury, “The first words out of his mouth, once he got to the bench because he didn’t know the severity of his injury, was ‘hey, I’m still starting game two.’ That sums up who he is as a player.”

Coach Allsup shared an occasion at the World Series when Suggs was in a staring contest. A coach from an opposing team was studying the Owls’ dugout. Suggs was convinced he was stealing signals. The rational answer for Suggs, stare back and stare hard.

Since the injury, Suggs has been in physical therapy. He even began therapy before his surgery so the recovery process would be quicker. With an initial return to action set for December, he wasn’t satisfied. He took it upon himself to find something to do daily to improve his knee. Extra stretching and extra bending soon progressed to extra walking and ultimately running outside three times a week for the 16 weeks he went to physical therapy.

In July, Suggs started throwing and slowly swinging a bat. He started full baseball activity at the end of August, and he is eager to return to the diamond.

“I am looking forward to getting out there and getting my arm and my knee back into shape,” said Suggs. “The main thing I have learned is that you cannot take a single play for granted. Every play, every pitch, every at-bat, don’t take it for granted.”

As for the upcoming season, Suggs is tired. “We are tired of just going to the World Series. We want to win.”