A League of Her Own 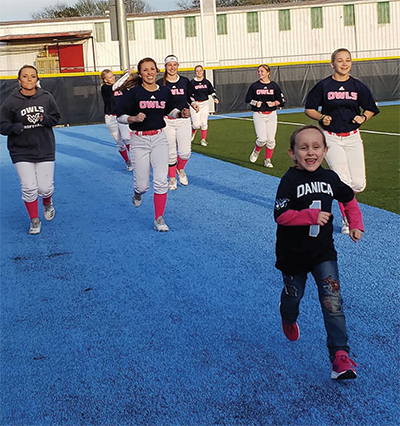 Dan Duston lost both of his parents to cancer. So when he and his wife Carisa learned that their only child was diagnosed with a rare kidney cancer, the couple couldn’t help but be burdened with the initial fear and sadness of losing their daughter too.

In July 2018 Danica Duston, an otherwise healthy child, tripped and fell on her stomach.

“She was in instant pain,” explained her father Dan. “After being at a few different hospitals, it was discovered that she had a Wilms tumor. She spent almost a week at LeBonheur Children’s Hospital before being transferred to St Jude Children’s Hospital in Memphis. She had a seven-hour surgery to remove the tumor which had taken over the kidney along with several lymph nodes.” She was 4 years old at the time.

A week later, Danica’s treatment of seven rounds of radiation and six months of three types of chemotherapy started. According to the American Cancer Society, a Wilms tumor, also known as a nephroblastoma, is a type of childhood cancer that starts in the kidneys and is one of the most common type of kidney cancers in children.

“She was very sick and did not eat or drink much for almost two weeks. We didn’t sleep for days,” Dan said. “She lost approximately 12 pounds. She started at 49, and for her size, that was a considerable loss.”

Carisa Duston, Danica’s mother, said the diagnosis was devastating. “It affected our family harshly and especially for Dan who lost both of his parents to cancer-his dad in 2004 and his mother in 2014. He thought he was about to lose his daughter too,” she said.

The Dustons stopped working to be with Danica. Family members stepped in, including Carisa’s sister, Malena, who eventually moved down from New Jersey to offer support.

“The chaos of the new diagnosis, new surroundings, learning several new things all at once and Danica being in so much pain and discomfort was earth shattering. But with our faith in God, we were able to hold it together, learn, move forward and praise God that it was not worse,” said Carisa.

The Dustons gained some comfort in meeting other families who had walked in their shoes. “We have seen others get better, watch others still on their journey and wept when other children have lost their battle.”

“It’s an event that is indescribable even though we have been through it. We continue to rely on God with future labs and CT scans due to worry and fear something else may happen,” said Carisa.

Following those nine weeks, the Dustons were able to take Danica home between chemo treatments. The treatments were spaced out every two weeks then every three weeks until Jan. 8, 2019, Danica’s last chemo treatment. Currently Danica is doing well. The family travels to St. Jude every three months for follow up visits where they watch her labs and CT scans.

“She has had CT scans the last few months that have questionable spots, but what we do is pray for clear scans and wait. She is in kindergarten and having so much fun. We ask for continued prayers for good CT and lab results,” said Dan.

In August 2018, the Duston’s family grew by 190. Jason Trufant, director of athletics and campus recreation at The W, approached the Dustons about becoming Owls. Danica has earned the distinction of being the smallest and youngest member of the Owls team.

“When I learned about the Dustons at our church, I immediately thought about how we as an athletic department could help. It was honestly a no brainer for our staff and student-athletes. Her presence at games is uplifting and I know Dan and Carisa enjoy the small break. We want to do as much as we can for Danica and the family. It will never be enough, but we have made it clear that we will always be there, and they will always be Owls!” said Trufant.

While at Ronald McDonald House, Danica was visited by the men’s soccer team and the men’s and women’s cross-country team.

“Fortunately, Danica was having a good day for the soccer team and absolutely loved the visit, a signed soccer ball and an Owls shirt. The next day when the cross-country team came, she was not having a good day and thankfully the team was sweet and understanding. She was given other Owls gear also and enjoyed them at a different time,” said Carisa.

Danica also attended a volleyball game and softball game last year. “The players were great interacting with Danica. She is shy at first but warms up fast. She just doesn’t like the spotlight. We are hoping to get to more games this year.”

Dan added, “Our extended family has been Danica’s biggest fans and supporters. The community has been great, near and far.

We have a wonderful and very supportive church family at Mt. Zion Baptist Church. The Lowndes County District 3 Volunteer Fire Department had a fundraiser for our family and another family that was going through a medical ordeal different than ours. The Allegro Family Clinics and Carisa’s work family were very supportive. Additionally, the local schools were on-hand to offer their love and assistance--Victory Christian Academy, Columbus Christian Academy, other churches, college and youth groups to name a few.”

“People we did not even know were sending gifts and cards to Danica. She was showered with so much love. I am sure there are many more,” said the Dustons.

Danica was accepted by Make-A-Wish Mississippi, and she chose to go to Disney World to fulfill her wish. She turned 6 on Sept. 21, and Danica is still like any other child her age who likes to play outside, read books and enjoy spaghetti, milk, chips and ice cream. However, if you take a closer look, Danica is teaching those around her valuable life lessons.

“Danica’s resilience is uncanny and immeasurable. She lives life to the fullest. She may not understand the seriousness of what happened to her, but she will tell you all about it and show you her scars with pride,” said Trufant.

Trufant added, “Danica’s strength and courage represent everything we want to teach our student-athletes. Her smile, positive energy and overwhelming passion for life are exactly what we want each and every Owl to achieve. She has shown us the way to be tough and battle through good times and bad. She is our hero, in more ways than one.”