“Do not struggle in silence.”

This quote has been at the bottom of every one of Dr. Scott Tollison’s syllabi—even before he joined The W’s faculty in 2004. 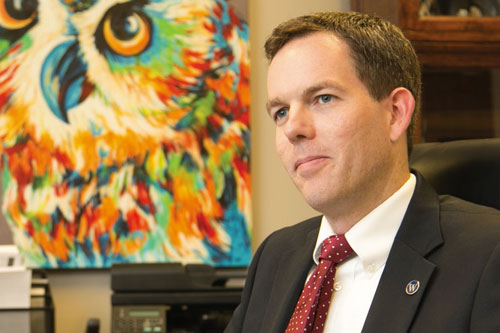 Tollison’s experiences and knowledge of what it is like to be a student, a faculty member and now a senior administrator have taught him the importance of being accessible.

“Being in the classroom gave me the appreciation for the work that’s being done by the students and the faculty,” Tollison explained. “Through the advising function, I have learned a little about the challenges that students have to face to earn a degree. It could be something as simple as a course rotation issue. In retrospect, it’s often the smallest things that needs to be fixed.”

“We don’t have a lot of closed doors here at The W,” he added. “There’s no reason to have a question go unanswered. I want to make sure students are comfortable in speaking up when they encounter a challenge.”

As the university’s interim provost and vice president for academic affairs, Dr. Tollison plans to do a lot of listening to answer the following question: How can we continue to increase net degree attainment through high-quality learning experiences?

“If you focus more on degree attainment than you do on headcount, I think over time you will have a more positive result. It answers every question. Everything we do at this institution I think in some way contributes to a student's earning a degree,” he said.

Tollison’s track record speaks for itself, and he is quick to credit faculty and staff for all of their efforts. The College of Business and Professional Studies' enrollment has grown 33 percent. Degree programs, including the master of business administration degree, were retitled to clarify degree offerings and attract more students. Partnerships with six community colleges have expanded learning opportunities for students in culinary arts. Additionally, the college fielded its first American Mock Trial Association team and the legal studies program was re-approved in 2017 by the American Bar Association.

In addition to his colleagues, Dr. Tollison also is grateful for his mentor, Dr. Thomas Richardson. “I want to continue the good work he has been doing.” Richardson stepped down as provost and vice president for academic affairs to continue a long-term research project while on sabbatical next spring.

Prior to being named interim provost, Tollison was the university’s senior academic dean. He had served as the dean of the College of Business and Professional Studies since 2012 and business chair three years prior.

From the administrative viewpoint, Tollison said, “I spend large portions of my day in conversation. That’s just the way I operate—trying to create a sense of accessibility so that individuals don’t hesitate to come and speak with me whenever they have a question or a problem.”

I really like the idea of the sandbox, this idea that there is nothing that cannot be built as long as everybody is willing to start from scratch—to not be locked into previous ideas—that you can build anything as long as you want to.”

The West Point native plans to have fun in the sandbox. “There is no reason to take everything seriously.”

A Facebook cover photo of Tollison, with MBA graduates and coworkers, on the steps of Reneau Hall says it all. The group of six, arms crossed, in the flying V formation, appear to be ready for takeoff. “It’s a nod to stock photography,” he said, noting the abundance of stock photos with business leaders with their arms crossed.

And speaking of blastoffs, Tollison is a huge fan of the Marvel Cinematic Universe. It’s a hobby he acquired later in life one afternoon.
Tollison has always enjoyed going to the movies in his spare time. One day on his way home from work, Tollison decided to take in a movie “Ironman”—it was the first in a series of about 20-plus.

“A lot of my coworkers are into it as well. It gives us something to talk about. I really had no familiarity, knew nothing about it, never collected comics, and now they are all must-see movies when they come out,” he said.
His downtime is also spent reading and running local half-marathons. He has even enjoyed league tennis when time permitted.

As Tollison shifts gears for the upcoming academic year and getting into the sandbox, his focus will be directed toward increasing degree completion, increasing access and looking for efficiencies in educational pathways.