Dr. Tammie McCoy has six grandchildren. Every Friday night, she and her husband Bruce, of 24 years, host pizza night. All the grandchildren come to visit and often spend the night. They are queens and kings of the castle. Pizza night has been a tradition for 16 years. 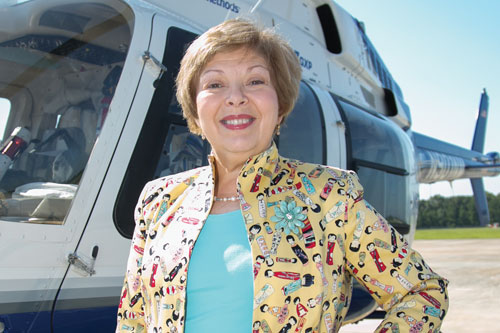 The tradition is so strong that McCoy once ordered pizza for faculty and staff of the nursing program. In return, her husband received a phone call from the store manager because he suspected someone had hacked their account and placed an order.

McCoy is now the dean of the College of Nursing and Health Sciences. She is following in the footsteps of Dr. Shelia V. Adams, who retired after 46 years. A recipient of awards such as Faculty Member of the Year, Kossen Faculty Excellence Award, Top 20 Medical and Nursing Professors in Mississippi by Online Schools Mississippi and Mississippi Community Service Nurse of the Year, McCoy is a leader in nursing at The W and among practitioners in the state.

She literally has taken her career to new heights.

McCoy’s nursing career began at Tishomingo County Hospital as a nursing assistant. She would become an emergency medical technician and ward secretary. As a nursing assistant, she watched and followed closely the nursing professionals to which she had access. “Tried on many caps,” is how McCoy described her early career. She learned the value of treating everyone with dignity and respect in a professional setting. In life, this lesson was instilled in

McCoy by her grandparents at an early age.

She continued to work as an EMT to support herself through nursing school, even though she was too young to drive the ambulance.

Between her junior and senior year of nursing school, McCoy’s preceptor nurse in the adult ER was a flight nurse. Although students were not allowed to fly during emergency calls, they would hop on the helicopter for refueling flights to the airport. This is when McCoy’s career took off.

“I was originally an adrenaline junky. I was one of the original flight team members out of NMMC Tupelo,” she said “I wasn’t afraid of anything, like all young nurses.”

McCoy’s recalls joining the team after working in the ER for approximately one year and boarding the helicopter without hesitation to care for patients. They would transfer patients from hospital to hospital and at times land anywhere from fields to highways in the middle of nowhere.

Many of her patients who needed the flight service went for a ride in the helicopter were pregnant. McCoy described the circumstances as poetic justice.

“Obstetrics was always my least favorite part of nursing. The students at The W know me and say “she doesn’t want to do that,” described McCoy.

Her distaste for obstetrics originated from a faculty member encounter while pursuing her nursing degree.

“I was scared to death of that nursing faculty member. I was so afraid I would not do something right. So I overcompensated, and I was always a nervous wreck,” said McCoy. “The interesting thing, I was probably very prepared to take on those emergencies.”

McCoy continued to stay on top of her job of being a flight nurse just for that one day the feared faculty member happened to surprise her with ride in the helicopter.

“I was not the adventurous type in high school. My friends would have never dreamed that I would have been a flight nurse,” explained McCoy.

As a nurse, she learned that patient education was critical. As a nurse’s assistant, McCoy taught CPR courses at Tishomingo County Hospital. Then as a nurse, she taught the classes at Itawamba Community College. As an ER nurse, she was requested frequently to educate the community on timely items such as first aid, recognition of heart attack and stroke, along with other basic emergency care. As the chief flight nurse, she was responsible for the education of hospitals, nurses and volunteers to prepare patients for flights and areas for safe landings.

After working as a flight nurse, McCoy transferred to home health. As director of nursing, she educated patients, staff members and nurses. Education has always been a part of McCoy’s career and developed into a passion.

When McCoy enrolled to pursue her master’s degree, her favorite faculty member from the past was her seminar leader.

“Her bar was super high. We raised ourselves to it. She made me better for it,” described McCoy.

McCoy has been at The W since 1999. She strives to take her passion for nursing and her career and transfer that love to her students. She wants them to know that this is not just a job, but also a calling.

“We are doing this because we have responsibilities to the patients and their families to take care of. That applies to nursing, speech pathology, health educators and students in kinesiology. They are human beings that need our services. We need to advocate for them every day. At the end of the day, that’s why we are here.”

McCoy holds high standards for all her students but is there to help them meet those standards. She also likes to bring a little fun and humor to the table.

“You see patients from when they are born until they die. There are so many special things within that process. As a nurse, you make sure that they have the best outcome possible, whether it is saving their life or dying with dignity.

That is why nursing is such a wonderful field. You can use all the skills and focus on what you enjoy.”

As dean, McCoy looks to focus on meeting the needs of students with technology and the delivery of content while still focusing on critical thinking. She also looks forward to what Turner Hall means for both SLP and nursing. NCLEX and certification pass rates will continue to be a top priority for McCoy and the departments.

Her ultimate goal is to see students succeed.

“The proudest I’ve been is when you see a student succeed and they feel good about themselves; to see them identify and recognize their success. It’s then supported when you hear employers say ‘They are doing a great job!’” added McCoy.