Dr. Marty Brock has always been a hands on person—both literally and figuratively.

From playing Xbox One to knitting scarves and hats for family and friends, she gets a thrill out of putting her hands to use.

The owner of an Atari 2600, a home video game console released in the mid-70s, Dr. Brock admits to taking her video games apart and putting them back together.

“I’m very tactile,” she said. “Television is too passive. I have to have something that keeps my interest, and video games keep me immersed.” 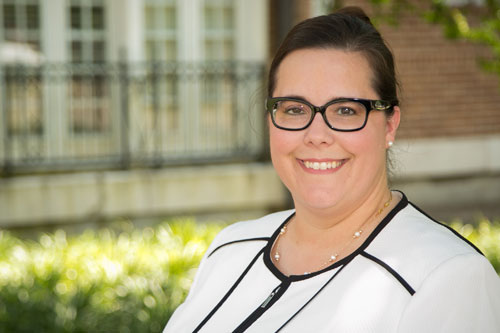 A gamer since a youth, Brock and her husband and two children also are video game enthusiasts and collect board games from around the world. It’s no wonder she ventured into the field of computer technology.

Fresh out of her master’s program at Mississippi State University, Brock started as a helpdesk consultant. Eventually she transitioned into an instructor of computer application services at the university’s Extension Office, where she performed a range of tasks, including building interactive video classrooms to training individuals ages 8-80 on how to use computers to implementing high level bandwidth in the county Extension Offices.

Almost six years into the position, Brock was ready for a change, particularly after having her second child. A new job meant less work travel.

“This opportunity opened at The W and it was meant to be. I worked with the learning management system at first, I did the support for the online classes, as well as faculty support and training,” she said.

“First and foremost, I still teach, and it’s one of the many things I love about being chair, and I intend to do so as interim dean,” Brock added. “We are a teaching university and that is a major component of our mission, and I think even being in this academic administrative role, it’s important to continue to be connected to the classroom and to the students. I value that. It’s part of the reason I get up and come to work in the morning.”

She also wants to continue moving the college forward. “I see our college as a whole as being a potential growth area for The W.”

Brock is excited about the recent announcement of The W’s new flat-rate MBA, which will make it one of the most affordable in the region. She looks forward to working with faculty to update and build the curriculum, particularly with the change of a bachelor of science in business to a bachelor of business administration. There also have been talks about renovating space for the Culinary Arts Institute.

“I couldn’t ask for better people to work with. I have great support in place,” she said about her colleagues.

Additionally, Brock praised the work of her predecessor Dr. Scott Tollison, who is now interim provost and vice president for academic affairs.

“He is amazing to work with. I could not have asked for a better mentor,” she said.

While their college may be in transition, Brock said, it’s also a time of possibilities.

“The W has always been unique and reinventing itself, and being able to be a part of that is an exciting time to be on campus,” she said. “Those transition times are when you see the magic start to happen. You see what’s coming next." The sky is the limit.”