A Place of Possibility & Opportunity

Nora Miller, no stranger to challenges, knows how to set a goal and go the distance. After nearly 30 years in higher education, she has dealt with everything from uncertain budgets to the intricacies of developing a campus master plan to heading crisis response. She has an eye for detail and a determination about rising to the challenges.It’s a philosophy she follows in her personal goals as well. 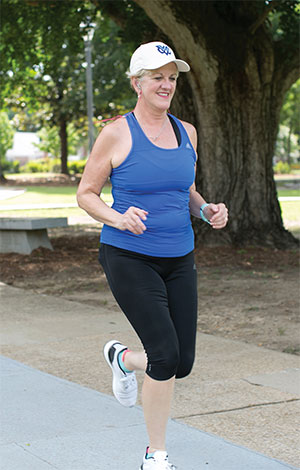 The first Homecoming under Jim Borsig’s presidency was in April 2012. A 5K run was scheduled as part of the celebration. Miller, who was 50 years old, had never run before and decided she would walk the distance. But she was challenged by her sisters who had signed up for a couch to 5K run, so she decided to run the 5K. Shortly after, a friend challenged her to run the St. Jude Half Marathon, set for Dec. 2012. She took the challenge and began to train.

The 5K was her first run, but it wouldn’t be the last. The St. Jude gave her another goal. As she watched others running the full marathon, she thought, “I want to do that.” She determined to train and try, and in 2014 she did it. “I kept signing up for other races,” she recalled. Four years later, she has eight marathons—26.2 miles each—under her belt.

“I like the challenge,” she said. “You have a feeling of accomplishment, and you’re completely in tune with your body. Running has lowered my heart rate and gives me great focus. It also gives me time to think things through. I’m not fast, but I finish in respectable time.”

Now, as acting president, she feels strong and ready for the challenges ahead. And she feels that years in a variety of higher education roles have prepared her for the next chapter. A proud member of The Long Blue Line, Miller also has a deep understanding of the culture and values of her alma mater. The W, she said, has always been “a place of possibility and opportunity.”

A native of St. Louis, she felt that sense of possibility as soon as she arrived on campus as a freshman in 1979. She knew no one, but she found a welcoming atmosphere that allowed her to fit in immediately. “I developed great friendships at The W,” she said. “No one was going to put me in a box here. Being on campus gave me a chance to know what I was capable of. I met caring professors. I grew up, and I learned to make decisions.” And, she added, “I got a great education.”

She finished her undergraduate degree in business administration in 1983 and returned in 1984 to work on an additional degree in accounting. She completed that in 1985. “I knew accounting would provide any number of professional opportunities,” she said. She has been a certified public accountant since 1987 and in 1998 earned her master of business administration degree from Mississippi State.

Her career path has included a number of jobs in the public sector. She has had positions with the State Auditor’s Office (Colleges and Universities Division) as well as with a public accounting firm. But her longest tenure has been in higher education, including four years as director of accounting at an Alabama community college before becoming director of internal audit in 1994 at the Institutions of Higher Learning in Jackson. In 1998 she became director of budget and financial analysis for IHL, a position she held until coming to The W in 2001. 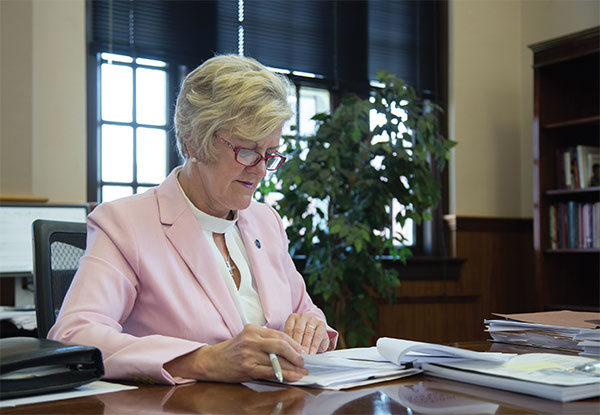 “I worked for IHL for a total of seven years,” she said. “Being there allowed me to know how the System works and what the administrative roles are. I have since worked with the IHL Board of Trustees for more than 20 years.”

This overarching view of the state’s higher education system has been an asset in her roles at The W and in interactions with the System offices. She has the advantage of knowing both well.

At The W, Miller served 2001-12 as vice president for finance and administration, becoming senior VP for administration and chief financial officer in 2012. In her positions, she has been involved with every phase of campus life.

Her direct responsibilities have included all financial and business management of the university, and she is keenly aware of the need for stewardship of resources. “I’m proud that The W has managed to have basically zero debt,” she said. That has been possible even with the devastating effects of the 2002 tornado that destroyed much of campus and resulted in $20 million in recovery efforts over time.

In addition, Miller oversees the operation of the physical plant and related support services, as well as development and implementation of the campus master plan. She’s also the primary point person when the university’s Crisis Action team is called together.

As a senior member of the President’s Cabinet, Miller has helped formulate policies, programs and budget development for academic and administrative units. She also has served as legislative liaison, providing a link between campus and the state’s governing agencies. “We have a strong leadership team, and we are fortunate to work closely as colleagues and support for each area of the university, including our core function, academics,” she said. 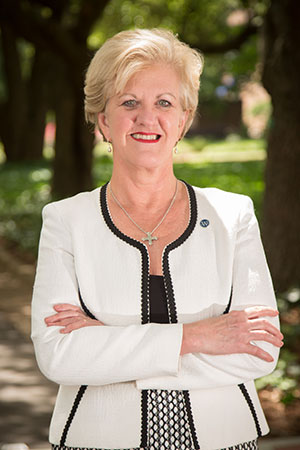 Miller also believes that one of her responsibilities is to be a good citizen of the larger community. She has served since 2002 on the Board of Directors for University Press of Mississippi. In 2005, she was named to the Top 50

Businesswoman of the Year roster by the Mississippi Business Journal. Closer to home, she has held leadership roles in the campus-community organization Town and Tower, the Rotary Club of Columbus, and the Tenn-Tom Chapter of the American Red Cross, as well as with her church, St. Paul’s Episcopal. She also serves as the university representative on the Columbus Air Force Base Community Council.

As she steps into her new role with The W, Miller said her goal is to continue to grow and strengthen the university. Focusing on both the physical and fiscal health of the university community, she said, “I want to help The W be sustainable long into the future. That means a strong financial structure, and it means an emphasis on financial literacy. Our future is not built just on admissions, but is the result of every decision we all make every day.”

While her experience at The W has prepared her with a solid foundation of knowledge, Miller knows there still is learning to do. “I want to do listening tours on campus,” she said. “I want to hear what others think I need to know. It’s important to hear all voices.”

A realist who knows there are challenges ahead, Miller firmly believes The W remains a place of possibility and opportunity. She knows, as Lawrence Bacow, the president of Harvard, has said, “. . . a university presidency is a marathon, it’s not a sprint.” Bacow, also a runner, has run the Boston Marathon many times. One of the lessons he learned was “that one of the big mistakes that new marathon runners make is they try to go too fast.”

After eight marathons and many years in higher education, Miller has learned that lesson. As she begins her new role, she’s at the starting line, and she’s ready to listen, to learn and to run a steady race.