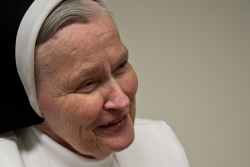 On a neglected part of West Capitol Street in downtown Jackson, two men are sitting on the steps of a former church, at loose ends on a sunny spring morning.

The building is home to Stewpot Community Services, housed in a former Presbyterian Church. The men may be waiting for food, clothing, legal advice and other services provided to those in need by the organization that has grown steadily since its 1981 founding as a community kitchen. They sit in the sun and wait, not talking.

Past the steps, there's a long sidewalk, and down a few steps almost hidden from the street, one finds a metal door with a simple nameplate: St. Dominic Community Health Clinic. Behind that door is a small woman who has dedicated herself to providing care for some of those most in need of medical attention. Quietly, persistently, she has changed lives.

Sister Trinita Eddington, a graduate of the nursing program at the St. Dominic School of Nursing, has been a registered nurse since 1957. During her career at St. Dominic, she progressed through a series of administrative positions, including head nurse, assistant nursing director and nursing services administrator, a position she held until 1980. That year, she was named vice president at St. Dominic Hospital, overseeing the departments of Nursing, Emergency, Endoscopy, Pastoral Services and Social Services.

But, after 30 years in nursing administration, Sister Eddington felt the pull of another calling. "There are so many poor in Jackson," she said. "I wanted to get into the community and take care of them." So, she took action. She resigned from administration and began her outreach efforts. 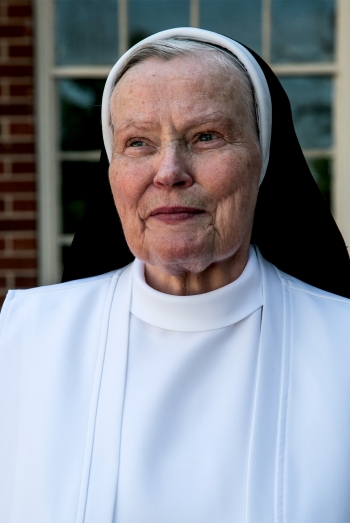 At the same time, she decided to continue her nursing studies at The W to pursue post-master's degree requirements for Family Nurse Practitioner Certification.

"It was great," she recalled. "Several of us would drive from Jackson to Columbus, on Sunday, and we'd be in classes all day Monday."

The program took a year, and she gained more experience with clinical hours, community outreach and pharmacology, among others. The W helped prepare her for her next challenge. "It was the most enjoyable part of my career," Sister Eddington said.

In 1996, the St. Dominic Community Health Clinic opened to provide free, quality medical care to individuals without the resources to
visit a doctor or hospital. St. Dominic renovated the space, which it rents from Stewpot, and the clinic sees approximately 30-35 patients a day.

"The homeless had made this area their community," Sister Eddington said. "When we first came here, some were skeptical. We had to build trust." That trust has become so well established that some patients have been returning for 17 years.

"We will see just about any person who walks through the door," she said.

Increasingly, that includes the mentally ill and those with alcohol issues, but on this particular day she had already seen two cardiology patients and one with diabetes. The clinic provides primary healthcare services, including routine checkups, treatment of acute illnesses and some diagnostic services. Typically, there are about 600 referrals from the clinic per year.

And there are often heartbreaking stories, such as a patient who arrived with cancer of the larynx and no insurance, including Medicaid.

In addition to Sister Eddington, the St. Dominic Community Health Clinic has a consulting physician, a laboratory technician and a social
worker. Volunteer physicians serve those with some specialized needs such as ophthalmology and cardiology.

The clinic is open Monday through Thursday without appointment. "For some, I will make an appointment for a return visit," Sister Eddington said. On Fridays, she continues her consulting services to St. Catherine's Village Life Care facility, where she works with the staff of the Alzheimer's facility. She also works closely with other outreach organizations, including Stewpot, Prison Fellowship, United Way, Red Cross, Catholic Charities of Jackson and many others.

In 2012, the Clinic recorded more than 12,500 patient visits, with an 85 percent follow-up for patients who rely on it for their healthcare needs. To date, 2,640 patients have open medical records and receive continuous medical care. The impact of Sister Eddington's response to her calling is profound.

For her many works of community and public service, Sister Eddington has received a host of awards and honors: the Lifetime Achievement Award by the Catholic Health Association; named to the Mississippi Nurses Hall of Fame; the Governor's Initiative Award for Volunteer Excellence (GIVE) Marsha Meeks Kelly Lifetime Achievement award for volunteerism; the Goodwill Salute; and designation by the Mississippi Business Journal as a Health Care Hero.

But to meet Sister Trinita Eddington is to quickly realize her greatest accomplishment. With a soft smile, she says, "Sometimes people come to our clinic just to be noticed. We stress dignity. Sometimes they just need to know someone cares. We reach out a hand, and they say 'Thank you for touching me.'"