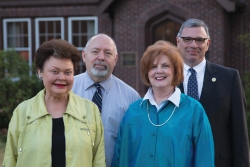 Life is a series of confluences. Just ask Ferrell Tadlock, staff attorney with the Mississippi Court of Appeals.

Before he was an attorney, he was an English major at Millsaps College. Before Millsaps, he was a student at Jones County Junior College, not far from Raleigh, where he was reared.

At Jones, he encountered an English professor named Hunter Cole, a personal friend of Eudora Welty. And that connection led Tadlock not only to Millsaps—which Cole recommended—but to a lifetime of collecting Welty works.

Cole, who retired in 2003 as marketing director of University Press of Mississippi, in a 2001 article published in the Clarion-Ledger, advised novice Welty readers to "Relish. Savor. Wonder. You'll have gained a world." His former student knew that well.

"Mr. Cole, whose middle name is McKelva, was the namesake of Judge McKelva in Welty's 'The Optimist's Daughter," Tadlock said. "He inspired me to keep reading."

The reading started with buying his first Welty book. "When I was 18, I bought 'Losing Battles' at McRae's in Jackson, the year it was published," he said. "I was thrilled it was signed." It was to be one of many signed first editions, magazines, posters, and related memorabilia that Tadlock collected over the next 40 years. 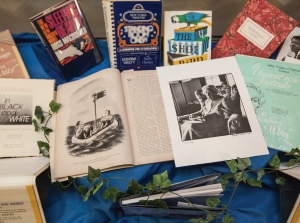 His collection, appraised at more than $13,000, now is at Mississippi University for Women, in part because of other confluences.

"I was looking for a house, and Barbara told me there was one available on her street." As fate would have it, Tadlock and Austin became—and still are—neighbors. Austin also was a close friend of Miss Welty, often driving her to events in Columbus at The W.

Serendipitously, the house was in the Belhaven neighborhood of another W alumna, Lynda Wright (also Tadlock's close friend)—as well as that of Miss Welty herself.

While Tadlock admits "I don't believe I ever ran into Miss Welty at the Jitney #14," he did run into her frequently at Lemuria Books, where he often moonlighted on weekends, and occasionally at New Stage. "I would be the first in line at every one of her book signings," he laughed.

Last October, Tadlock visited The W during the Decorative Arts and Preservation Forum as a guest of a Millsaps classmate and began to discuss literature, The W, and Miss Welty's connection.

An idea was born. "Barbara and Lynda became Golden Girls this year, and they've done so much for me," Tadlock said. "I decided I wanted The W to have my collection in honor of them." Wright and Austin also have added some of their Welty items to the donation.

While there is much of interest to literary scholars in his collection, Tadlock says that one of the most interesting to him is a book by mystery writer Ross McDonald, whom Welty admired. "The book, 'Sleeping Beauty,' is dedicated to Miss Welty and signed by both Welty and McDonald," he said.

When pressed on his favorite Welty work, Tadlock admits partiality to "The Ponder Heart." "I saw Tom Spengler play the lead at New Stage, and later saw the musical," he recalled.

All of Welty's work, however, shares a common thread, he believes.

"It is so true and so Southern. If only the characters in my life were as good as hers!"

There's a special place in his heart for all of the works and what they represent. "I have many signed books, but the Welty are particular favorites," he said. "I think The W is the right home for them, especially since there is a Welty connection. I hope this gift will prompt others to want to do the same. I wish I had more to give."

When he bought "Losing Battles" in 1970, Tadlock had no idea how his adventure would end. It is the only novel Welty set in the hill country of northeast Mississippi, an area reminiscent of the region surrounding The W.

Through a series of confluences involving Miss Welty herself, the book Tadlock first bought as an 18-year-old, as well as a treasured collection spanning her rich career, have found their way back.

To find out more about how to donate to the MUW Foundation, contact Angela Crossley Ferraez at This email address is being protected from spambots. You need JavaScript enabled to view it. or (662) 329-7151.