A 'NEW' Type of Leadership 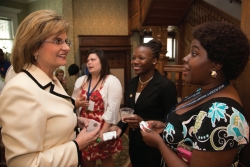 Even though Bethany Lindsey is from the small town of Mantachie with less than 1,200 people according to the 2010 census, she has big dreams. Lindsey, who will transfer to The W in the spring, one day aspires to go into public service, working first in her community and possibly making a run as a state senator.

She took a step toward her dream by attending the NEW Leadership residential program held on The W's campus this summer.

In partnership with the John C. Stennis Center for Public Service, based in Starkville, NEW Leadership Mississippi is a nonpartisan program designed to develop foundational leadership skills for college women. The national program was developed by the Center for American Women and Politics at Rutgers University and now is at 17 universities nationwide.

"The NEW Leadership experience was tremendous. I have participated in many other leadership programs throughout my high school career, but this was unlike any other," she said. "This program was a lot smaller than the other programs I participated in. I enjoyed this aspect of the program because I felt a connection with all the participants."

Lindsey was among 33 women from public, private and community colleges who participated in the program. At their fingertips, they had a dream team of state, regional and national leaders who educated them about ways they can become more involved in public service and the political process.

They heard from Amy Tuck, a two-term Mississippi lieutenant governor who currently serves as vice president for campus operations at Mississippi State University. 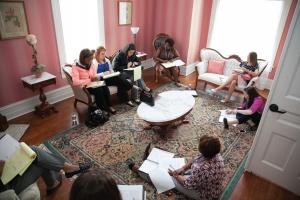 Her initial advice to the young women: "Be. Know. Do. Be who you are and know what you believe in. What are your defining values? Know what is at your very core that gives you a realistic foundation to build on and it gives you a firm grounding when things get tough."

Tuck stressed that leadership also is believing that you can do anything you want to do. "Do not be insecure. Be inspired."

She encouraged the participants to show people that you care as a leader. "Be the example that people look up to."

Toney, who ran for mayor of Greenville at age 27, served for two terms. She said it was amazing to watch the students get so engaged in the program.

"These young ladies are being exposed to top-notch leaders from across the country…," she said. "The intimacy with which they are receiving this information is just mind blowing to me. Yesterday they had the opportunity to meet with two state senators, a state representative and former Lt. Gov. Amy Tuck all within a three-hour period."

Toney said women must be involved in public service.

"It's a very one-sided, very non-diverse environment when you don't have women at the table when half of the population is women," she said. "We have to recognize that at a table without women there should be a gleaming bright neon sign that says something is wrong because it's just not representative of our state. It's not representative our nation."

Students also heard from a variety of women who have excelled in public service roles within Mississippi.

Sessions included exercises that encouraged development of skills such as public speaking, conflict resolution, networking and advocacy. Students worked on major group projects dealing with the Charter Schools issue both statewide and nationally.

They were assigned a "side" and learned what it is like to prepare an issue-based campaign designed to influence both the voting public and elected officials.

Participants also traveled to Jackson to meet directly with women public officials, some elected, some appointed and some selected through a hiring process to hear about their particular experiences in government.

Brown said the program exceeded their expectations. She said, "I hope they (participants) will leave encouraged and challenged to take risks. Political office is not for everyone, but community action is, and I think there are ways for those of us who don't love politics to still make a difference in their communities. I think this program will prepare the whole range."

"I would love to see a network in Mississippi to support these women whether it's businesses, whether it's nonprofits— resources such as internships," she added.

Pieschel said, "I hope the participants will gain a new enthusiasm for being involved directly in the political process in their community, state and nation. I hope they will learn to work in collaboration with those whose politics might differ from theirs, but who have the same goals for making the world a better place for everyone.

"Although they are over 50 percent of our population, women still make up only a small percentage of those who work directly with the legislative process or who are elected officials. This program will give young women a jump start in confidence and skills to enter the political world and make a positive difference."

Pieschel said they plan to continue the program as a part of the university's focus on leadership training for women.

"Bringing more voices into the political process is a national goal, and we want to play a positive role in that process."