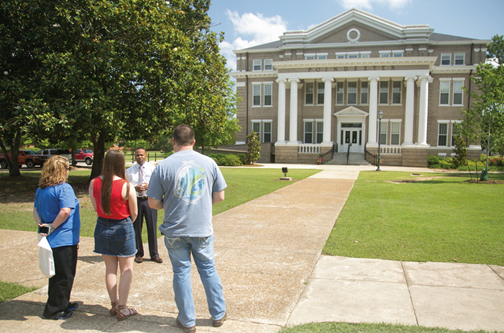 At 1100 College Street, you will find a campus steeped in tradition. It seems that every brick of every building has a story to tell, whether of storms from the past or visions of the future. Even a legendary tree has its own history, leaves that fall at just the right moment and eventually lead to love across the county line. Today’s students who walk through the front gates of campus will find ways to create their own stories inside and outside of the classroom.

In the fall of 2016, The W enrolled 2,956 students who earned 36,708 credit hours. While the usual focus on university numbers usually revolves around the annual headcount, what may go unnoticed is that today’s students are earning more hours. For example, in 2009 The W reported a head count of 2,953 students with 28,568 credit hours produced. What may be even more amazing is that over 40 percent of today’s students hold a full-time job while another 34 percent hold a part-time job.

Not only are students dedicated to a more than full course load, they are graduating. The W continues to confer degrees above the IHL system average and break the institution’s record for the amount of degrees awarded per year. In 2016, The W awarded 864 degrees compared to 488 just 10 years earlier.

While today’s students may be different, the reasons they remain on campus is constant.

“Students still come to The W for the academic experience, but they are also looking for affordability,” said Shelley Moss, director of admissions. “They want to be a name, not a number.” Since opening the doors as the Industrial Institute and College (II & C), the goal of the institution has been to provide accessible education to an underserved population. Today, The W continues that mission.

“We see students from many different states due to the online programs, but we still continue to be a regional university that educates Mississippians,” said Moss.

Forty different states were represented in the enrolling class of 2016, as well as 77 of Mississippi’s 82 counties.

The Office of Admissions is always adapting to bring in such a unique class of students to The W.

The admissions process is moving faster than ever for today’s students. On Monday, they can be off the admissions radar and by Friday, they are admitted and awarded a scholarship. Interested students can apply online, track their process online and communicate with their admissions counselor online through social media.

“We do a lot of social media. We even have a texting system we use to notify students immediately if they are needing to submit a document to complete the admissions process,” said Moss.

Though today’s technology plays a vital role in student recruitment, campus tours are still important. As of midspring of 2017, campus tours of The W had already increased by 23 percent as compared to the previous year.

“Campus visits play a major role in student recruitment even for our local students. Many students think they know who we are, but when they get inside the gates of campus they can see the benefits that the university has to offer,” said Timothy Hopkins, admissions counselor.

Hopkins said students are looking for a place to fit in. With tours of campus including visits to the Stark Recreation Center, residential halls and classrooms, the interested student can picture themselves at The W. Many of the tours around campus are given by W students which allows visitors to ask questions and gain answers from an enrolled student’s perspective. Both Kamryn McIntosh and Dalton Williams will be attending The W this fall. McIntosh is coming to The W from Amory to study nursing with the goal of attending a medical school to study cardiology.

“When I came for a tour here, it was the school that yelled ‘pick me, pick me,’” explained McIntosh. “It was like home. Everyone was so friendly.”

A welcoming campus brought the feeling of an easy transition to a university. A decision process she described as crazy just became simple. With every school in the state offering and showcasing all that they have, the feeling of home brought a literal sigh of relief when she stepped onto campus.

Williams is journeying from just across the state line to The W. The Millport, Ala., native will be majoring in biology this fall and will be a member of the Gordy Honors College. The availability of scholarships and a personal academic atmosphere that was close to home is what led Williams to The W.

“I come from a small high school with small classes and my teachers know me. The W offered the programs that I need, I know people here and everyone tells me it’s a great school,” said Williams.

He added that while doing his research, he contacted medical schools to ask them which university would look best on his application. They answered, “The W.”

Students today are still receiving numerous letters encouraging them to make the “right” decision. They have constant notifications of unread emails and social media messages, and everyone is rolling out the red carpet when they come to campus. But, if you talk to today’s students at The W, they will tell you that they picked a place that just felt like home.