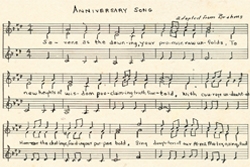 It’s a song every member of the Long Blue Line knows, “Serene as the Dawning.” Today, it’s known as the alma mater, but few know its history, or its secret: Who wrote the song we all know?

The inherent trouble with history is that we must rely on those writing it to make certain it’s correct. A simple error, an incorrect name noted once, can easily become a fact for generations to come.

In those moments--we hope are few--when history is wrong, we must make note to correct the errors before the truth is lost to time.

One such error was made some 29 years ago, as The W was celebrating its centennial. A simple error, confusing one sister for another, resulted in the wrong person receiving credit for our beloved alma mater.

This past November, Sandra Paschal Polanski (‘61) and her husband, Frank, made the trip from Jackson to Columbus for the rededication of Poindexter Music Hall.

As Sandra flipped through the music booklet the MUW Singers had used for their performance, she spotted the Alma Mater, a song she had helped write, with the notation “Poetry by Patricia Pascall Eccles ‘63.”

Returning home, Sandra wrote an email to her sister, Patricia, to share her discovery. It was the same error she had spotted 28 years earlier, and thought she had corrected then.

And so, after a month of collecting histories from her fellow alumnae, Patricia Paschal Eccles (‘63) set out to right this wrong.

“Credit for writing the words and music to the MUW alma mater is given to the wrong individual,” she wrote in a letter to MUW President Jim Borsig. “I am the individual receiving the credit. I was in high school when the song was written; my sister Sandra Paschal Polanski was a piano major at The W at the time and was involved. She should have received some of the credit--but not all.”

“In the spring of 1959, President Charles P. Hogarth appointed a committee for the task of writing the anniversary song,” writes Mary Belle Spivey Lundquist, (‘59). “The committee was composed of Marilyn Burnett, Student Christian Association president; Carolyn Leslie, piano major and Mortar Board president; Helen Taylor, a voice major and president of the Civic League; sophomore piano major Sandra Paschal, and others I don’t recall.” 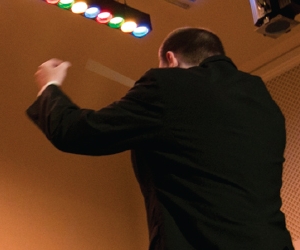 “As I remember, Mary Belle Spivey, a math major, gathered our group to listen to possibilities for melodies,” wrote Carolyn Leslie Brinkman, (‘59). “Carolyn was widely respected as one of the most outstanding writers on campus--quite a fine creative writer as well as campus leader and piano major,” Polanski, (‘61) writes.

“I had a new Hi-Fi in my room and enjoyed listening to classical music,” Lundquist recalls. “When some of the committee were in my dormitory searching for a melody to use, I played for them the fourth movement of the `Brahms First Symphony.’ They liked it and used it.”

“Imagine -- Brahms was our collaborator,” said Brinkman. “All of us agreed that the majestic melody in the 4th Movement of the First Symphony was the perfect setting.”

“All of us knew the tune, and I think I had scrawled it down on music manuscript paper to be sure we covered all the notes.” said Polanski. “We hummed along as we developed words and syllables to suit the thought with an appropriate inflection of the music and words. Carolyn had things well under way by the time I arrived, and we tossed in suggestions of words, phrases, ideas, which she then refined to become the words of the new song, reflecting the philosophy of honoring the past and moving into the future with confidence and inspiration deriving from our W experience.”

“Sandra skillfully fitted the music to the words,” said Brinkman. “I humbly claim credit for the lyrics, although I know it was a joint effort that night as we sounded one phrase after another.”

“The song was first officially sung by the class of 1959 in the May 1959 Magnolia Chain,” Lundquist recalls. The following spring, The Dilettani published the manuscript the elder Paschal scrawled under the title “Anniversary Song.”

The song gained in popularity as the choir and student groups continued to use the song at ceremonies and gatherings. By the time of the centennial in 1984, the song had become so beloved that the Alumni Association voted to make the anniversary song the new alma mater for the university.

Only one change was made to the original song, “Sing daughters of our Alma Mater” was changed to “Sing praise to our great Alma Mater,” to reflect the addition of men to the student body in 1982.

As part of the centennial celebration, the Alumni Association gathered the songs of The W’s history and stories about how they came to be for a songbook. And thus began decades of confusion over the source of the song.

“When the anniversary volume, ‘MUW Songs We Love,’ was published, the credits for the anniversary song were not correct,” recalled Sandra. “For some reason, my sister’s name was erroneously included as the writer of the words.”

Polanski said she contacted Minnie Ruth Eubanks Smith, who had collected the songs and stories for the songbook, but admits she never followed up to see if a correction had ever been made.

Even if the correct notation was placed somewhere for future publications, the songbook had already been published and widely distributed amongst the alumni.

And so from one songbook to next, the errant attribution was perpetuated for 28 years, right up to the present day.

Truthfully, the misattribution would likely continue to be overlooked for all time had Polanski not attended the Poindexter Hall reopening in November and spotted the error she thought she had fixed years ago.

Thanks to Eccles’s letter and accounts from the original committee, history can be re-written.

On Feb. 15, 2013, at Dr. James Borsig’s presidential inauguration, for the first time in its 29-year history as the alma mater, “Serene as the Dawning” bore the correct names of its songwriters.