Welcome to your home away from home 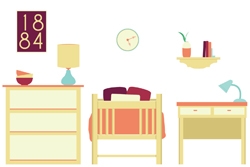 You eat there. You sleep there. You study there. You also make lifelong friends there. Just as much learning takes place there as it does in the classroom. Welcome to your residence hall, an integral part of the college experience, which offers cultural, recreational, social and academic growth.

"Moving on to campus was the first move I have ever made away from my parents' home, and I was both excited and scared of the change," confessed Dalton Dogan, a senior business major from Greenville. Dogan explained that "dorms" were known as a place to sleep and store your belongings, but a residence hall is a place that you can live, grow and learn. "Living on campus exposed me to all kinds of people that I would have never met living in a small town. I made so many new friends," he said. Gone are the days of living in a box, dating back to the 1960s. Today's residence halls offer amenities, ranging from suite-style living to kitchenettes and laundry facilities.

The W announced this past summer a phased residential facility enhancement plan to improve oncampus living, bringing together historic and recently constructed buildings.

"The plans are going quite well with the enhancements and we have plans for so much more to come," said Sirena Cantrell, dean of students. As part of the enhancement plan, furniture was replaced, new window treatments were installed, microfridges were replaced, lounges enhanced and speedier Internet is now available in Callaway and Grossnickle halls.

A standardized color palette was introduced to the residence halls, as well as new awnings and W-branded welcome mats, in the university's signature blue. The W has six residence halls, offering a variety of amenities and housing options.

Callaway Hall is the oldest building on campus, erected in 1860, and is located on North Campus next to Cochran Hall. It was named in honor of Mary J.S. Callaway, a professor of mathematics from 1885-1900. Callaway Hall is for upper-class female residents and is known best for its high ceilings and antebellum atmosphere. With its study lounges, vending machines, laundry facility and television lounge, Callaway hall is a suite-style residence hall. Columbus hall is a recently renovated historical building. The five-story building is named in honor of the city of Columbus. Columbus hall is home to The W's upper-class male residents. It has all the amenities that Callaway has and is also a suite-style residence hall.

Grossnickle Hall was renovated in 1996 and was named in honor of R.L. Grossnickle, a former head of the department of mathematics. Grossnickle is coed and houses the residential honors program. It is located behind Painter Hall. Every suite has a living room/kitchenette space and has its own individual bathroom. The hall also has the same amenities as the other halls, but also includes a computer lab.

Hastings-Simmons Hall was originally named for Olivia Hastings, an early leader in the movement to establish a state supported college for women. The building was then rededicated in October 1994 as Hastings-Simmons Hall in honor of Miriam Q. Simmons, MUW alumna who served as a member of the Board of Trustees of State Institutions of Higher Learning and a member of the Mississippi House of Representatives. Hastings-Simmons houses The W's upper class female residents, has a living room/kitchenette space and its own individual bathroom. It has all the amenities as Grossnickle including a computer lab.

Jones Hall was named after Richard W. Jones, the first president of the university and is home to upperclassmen female residents. Jones is a suite-style residence hall, and the hall also has study lounges, computer lab, vending machines, laundry facility and television lounge.

Kincannon Hall was named in honor of Andrew Kincannon, a former president of the university, and provides the freshman population with focused support and development tools to help with the transition to university life. It is a suite-style residence hall that comes with all the amenities.

A project of particular interest to Cantrell is the green space adjacent to Kincannon. "My favorite project here on campus was changing the space that used to be the old tennis court into a lovely open green space the students can enjoy," she said. She also added, "The arrangements for this summer's enhancements are already mapped out and will be focusing on Columbus and Hastings- Simmons halls."

In addition to being an architecturally significant campus with more than 23 buildings listed on the National Register Historic of Historic Places, The W is located in the heart of the Columbus historic district.

Walks on campus are convenient, with most buildings being within a 10 minute walking distance of each other.

Austin Rayford, a senior communication major at The W and resident assistant, said "I enjoy all of the benefits of living on campus from not having to pay to do laundry to the night involvement you gain in social clubs on campus. I have a pretty cool social life from living here on campus."