A Foundation for the Future 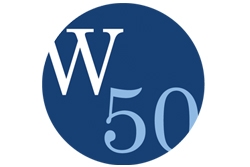 On May 31, 1965, Miss Emma Ody Pohl, secretary of the MSCW Foundation, signed the charter of incorporation to be filed with the state of Mississippi for the legal creation of the Foundation with the goal of providing Mississippi University for Women support and encouragement to enhance and enrich The W.

The Foundation's volunteer Board of Directors has helped lead the way to endowments reaching millions of dollars and unrestricted scholarships, accomplishments that may have been unimaginable by Miss Emma Ody Pohl. The Foundation lived up to its name in the late 80s by providing just what its name implies. During a time that was characterized by the threat of closure and lack of state support, the Foundation created the Tomorrow Fund that would bring together individuals, businesses and industries of Columbus to exceed its own goals to support The W, with the rally cry of "There must be a tomorrow for Mississippi University for Women."

But perhaps the greatest accomplishment of the Foundation has been its impact on individuals. Often, these milestones are measured not by the names that linger in W history, but with names never known to others. 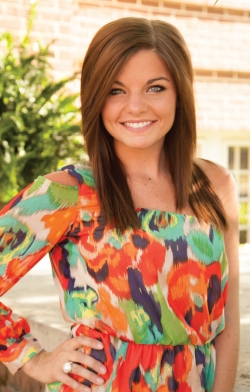 Meet Lauren Clark from Little Rock, Ark. A Google search is what brought Clark to The W. More specifically googling "top ten nursing schools in the south." Seeing the high NCLEX passing rate of The W, Clark scheduled a campus tour and visited a few days later. The next week she brought her parents to visit campus. The next week she moved onto campus.

"This was one decision my parents let me make on my own. They could see that I was happy," said Clark.

Shortly after being on campus, life turned upside down for Clark. Lauren's father was diagnosed with prostate cancer. Due to his battle with cancer, he would have to leave his job to fight for his health and his family. With her father's illness, the realization of out-ofstate tuition and being away from her family, Clark began to look for answers.

Clark started reaching out to everyone she knew from her short time on campus. She found answers in the Foundation. The Little Rock Alumni Chapter invited Clark to attend an event that was being hosted in her home town, and they asked if she would speak to The W alumni. After returning to campus, little did Clark know that should would be awarded a foundation scholarship.

Soon after, Clark would be asked to speak again about The W, this time at a scholarship luncheon to donors of scholarship endowments. Clark was unaware that her heart-filled thank you would make it to YouTube. One week later, a friend of The W who resides in Florida, would contact Andrea Stevens, executive director for the Office of Development & Alumni Relations, to make a donation to the Foundation after being impacted by the words of Clark. During the luncheon, Clark would meet Carolyn Kimbrough, class of 1963 president. That day they would build a friendship that is continually strengthened by phone conversations.

Chairmen of the MUW Foundation
Board of Directors

"These scholarships mean I can go to school and not have to worry about debt," Clark stated. "Before I was stressed!" Since then, Clark has been accepted into The W's ASN program and will continue on with the RN-BSN bridge program. Her plans do not stop there. Her ultimate goal is to complete a master's degree in nursing and return to Arkansas to work for the state hospital.

Clark also has been working with the Foundation's Telefund since this past spring; she thoroughly enjoys making the calls and connecting with alumni. Recently she talked with an alum who was celebrating her 96th birthday. The stories, connections and bonds are what she truly finds inspiring from the Long Blue Line.

"To hear how much they love The W is awesome. They have so much advice. They have so much to say and know a lot about the campus," Clark said. "They had fun." Clark is just one of the many who has been blessed by The W's alumni and family over the past 50 years.

"Supporting student opportunities through private giving to the MUW Foundation is beneficial for our donors, our students and our university as a whole. We speak with many alumni who tell us the Foundation scholarships they received made a college education possible, allowing them to give back to The W," said Stevens. 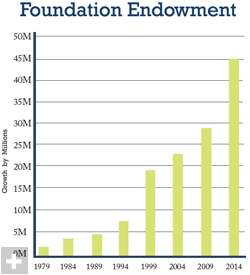 Stevens sums up the anniversary by saying, "The 50th year of the Foundation is significant not only because of the milestones we have reached, but the opportunities that are now present. We are allowed to not only look back at what we have accomplished, but to look forward to what we will achieve."

Starting with the original $1,000 in gifts by Miss Emma Ody Phol and Mrs. Pratt Thomas, the Foundation has a lot to celebrate in its 50 years. The Foundation has provided an avenue for alumni and friends of The W to pay it forward. The legacy of the Foundation will not be measured just in dollar signs, but by the students who proudly say, "I graduated from The W."

Dr. Jim Borsig, W president, said, "For 50 years, the Foundation has provided support, enabling a level of excellence that can't be achieved by state appropriations and tuition alone. The lives of countless students have benefited from the generosity of donors to the Foundation. We are thankful for our alumni, faculty, students and friends who give to The W."