Marchita Mauck, a Columbus native, entered The W in 1960 with the intention of becoming an English and history major, a goal she pursued until her junior year. It was then she was assigned a student worker job in the art department and crossed paths with Professor Mary Evelyn Stringer. That meeting changed the course of her career—and her life.

"I took art history, and I was really interested in it," she recalled 50 years later. Luckily, Stringer was interested in the promising art student as well. "She encouraged me to apply for a Fulbright—which I got," Mauck said. "I spent 1964-65 in the Netherlands studying at the University of Utrecht."

While writing her dissertation, Mauck identified issues in liturgical history that intrigued her. Her interest led to the University of Notre Dame, where she pursued another master's degree. There, while teaching liturgical art and history classes, she was asked to lend her expertise to designing ritual spaces. "That's how it began," she recalled. 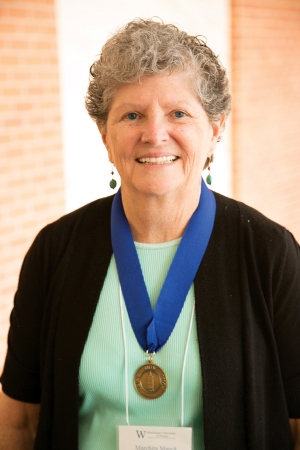 Since then, in addition to teaching for more than 46 years at LSU, she's been a national and international consultant on the design of sacred spaces, as well as becoming an internationally recognized expert. Her lifetime efforts were honored last year by the American Institute of Architects, when the national organization presented her its Elbert M. Conover Memorial Award for her contributions to religious architecture.

"The award is given every other year as a career achievement award to a non-architect," Mauck explained, adding that she's the second woman to receive the distinction.

For Mauck, though, the real honor lies not in awards but in the significance of her work. Drawing on theology, anthropology, sociology, psychology, and history, she explores designs based in historical precedent and interprets them for contemporary spaces. The idea, she says, is for people to "experience ritual in a way that is transformative. I look at the human dimension of experience and ask 'what makes the experience memorable?'"

She recalls a church in which the design placed a tombshaped font in the narthex. She remembers watching as family and friends arrived for a funeral service, observing that individuals gathered around the font and spontaneously dipped their hands in the water. "It was an unprompted and powerful gesture," she said. To Mauck, that's the beauty of a design that inspires authentic response.

Among the hundreds of designs she's consulted on— including those in places as diverse as Columbus and Germany—one of her favorite is still St. Jean Vianney, a Catholic church in her longtime home of Baton Rouge. "It is a contemporary church with powerful spaces," she said. Dedicated in 1998, the church has received more than 18 awards for "the boldness and simplicity" of its design, which includes bronze sculptures by California artist Max DeMoss. To Mauck, her many contributions aren't that far afield from her early interest in English and history. "There's poetry in all of it," she said, "the text, the power of ritual language. The language aspect is splendid." 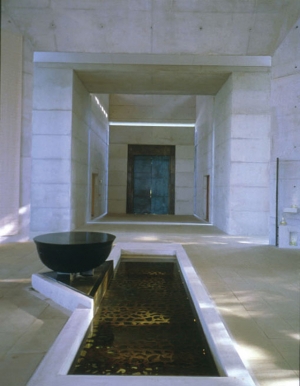 The love of design and language merge for Mauck in works she has authored, including "Shaping a House for the Church" and "Places for Worship: A Guide to Building and Renovating." The former has been adopted by a variety of denominations, including Lutheran, Catholic and Episcopal. She also provided the introduction for "Sacred Light: Holy Places in Louisiana," with photographs by A.J. Meek, and "Historic Baton Rouge Architecture," with photographs by Pat Caldwell and Jim Frasier. In addition, Mauck curated "Treasures of LSU," published by LSU Press in 2010.

Coinciding with the sesquicentennial of the university, the book features more than 100 significant artworks and artifacts, some of which had not previously been identified, Mauck said.

Now professor emeritus at LSU, Mauck has previously taught at Yale Divinity School, the University of Notre Dame, and the Chicago Theological Union as visiting professor. After her formal retirement, she continues to teach occasional courses at LSU and to consult. A Golden Girl in 2014, the former student of Stringer is still busy, still learning, and still sharing her talent.