Every Student Can Learn 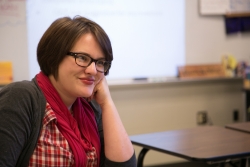 If you want to be inspired, Leigh Pourciau's classroom at Germantown Middle School in Madison is the place to be. Students lucky enough to find themselves there often are surprised by their own talent as they grow in confidence and competence.

The 2008 English education graduate has rapidly become a teaching star, both with her students and with a larger audience. She developed the school's first-ever creative writing program and online literary magazine, in the process creating a curriculum so popular some students have returned to her elective class for the third year.

The Mississippi Department of Education has tapped Pourciau to develop Common Core writing lessons and instructional videos to be used statewide. She's been selected from more than 3,000 applicants to be a 2013 Dream Team member for LearnZillion—a group of "extraordinary" teachers from around the nation who develop and share teaching approaches. And, she's featured in a videotaped segment on Gates Notes, philanthropist Bill Gates' blog.

How did she gain such visibility in just five years of teaching? "I say 'yes' to everything," the Louisiana native laughed. "In a new profession, you have to overload yourself," she believes. "You're always a learner. You're never an expert."

She learns because she reads, absorbs, incorporates, questions. . . and more than anything, has fun. Her love of learning is contagious.

On display outside her classroom are samples of student efforts from a variety of writing assignments. They prompt fledgling writers to use imagery, specific structures, and ingenuity to fulfill the assignment. Among them, "Just Because I'm From Mississippi. . . ." deflates a variety of stereotypes; two-sentence horror stories create an eerie scene using precise language and vivid images; and "an original protest song" allows students to articulate a message around a predefined format.

What good teachers do 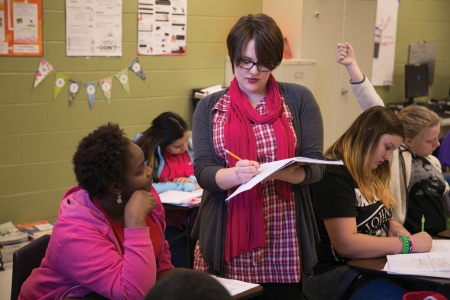 "Every student can learn," Pourciau believes. "I believe in relevance. My responsibility is to figure out why they're not learning if they're not. I try to start them where they are and find things that hit the middle school target."

Her students come from a variety of demographic backgrounds. But inside her eighth-grade room on a particular day, they blend seamlessly. She moves from desk to desk, encouraging, answering questions, reminding students of tips to improve the poem they're working on during the hands-on assignment. She smiles, laughs, jokes, corrects, gently prods. It's obvious the students love her.

On this day, they're using a published poem as a prototype and revising their own poems, begun in an earlier class period. The example is written by a former high school classmate of Pourciau's and celebrates her home state of Louisiana. Students are challenged to use a favorite place—"your grandmother's house, the deer camp, the football field, the beach," a place where they can provide vivid details about the people, the sayings, the taste, the sounds, and the weather. They are bringing to life a location important to them. "Don't just write words," Pourciau tells them. "Write music."

What students are actually learning that day is sentence fluency, a term Pourciau doesn't hesitate to use as she discusses their writing. But with her typical energy, she makes it fun.

As students work, Pourciau moves quietly around the room, placing a plastic slinky on each desk. "Don't touch it," she tells them as they eye the neon-colored toy. When students reach the end of the allotted time to revise, she instructs them to watch her read as text is projected at the front of the room. She holds the end of a slinky in each hand. 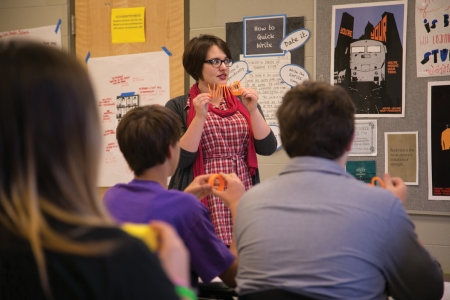 Next, she projects a writing sample with sentence fluency. One sentence is short. Following it, there's a longer sentence, complete with a phrase or two. An excellent example of sentences with variety and liveliness, this writing is much more interesting. The slinky stays still with each short sentence, moving a greater distance with longer sentences. The goal is to have a variety of slinky movements.

Next, Pourciau asks students to read their own poems aloud to another student they're paired with. They use the slinky to visually gauge sentence fluency. It's easily apparent if there's a need to continue revising, incorporating both long and short sentences.

As they read aloud for sound and rhythm, she also encourages students to ask other questions. Did they overuse words? Did they leave a word out? Could they use a different, more specific word? Her approach calls for sight, sound, and feedback.

'The W' is everything

A visual person, Pourciau says she likes to use "the tangible and visible. I figure out every way to be interactive." She says she learned her teaching approach at The W by "watching teachers I liked and modeling myself after them. The W is everything in my teaching," she said. In particular, she remembers the lasting influence of English professors such as Dr. Bridget Pieschel and Dr. Gloria Bunnell. "I learned to make things happen." 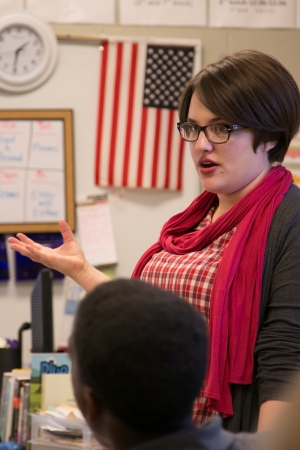 A risk-taker herself, Pourciau has encouraged her students to take writing risks such as entering contests sponsored by the New York Times. The latest nationwide student competition required they submit a 450-word opinion piece, arguing a thesis persuasively. Their topics ranged from whether Mississippi should change the state flag to whether competitive sports benefit youngsters, among others. They earlier had proved their abilities to stretch themselves—and reinforced their teacher's faith in their skills—by earning three honorable mentions when they entered a New York Times competition to do a 2013 recap rap.

Part of Pourciau's teaching approach is to give herself the same writing assignments she gives her students. "I always write everything they write," she said. She also encourages students to read, believing "it's hard to make an artificial writer from someone who doesn't read."

For an independent reading assignment in another class, accelerated English, students are exploring books such as J.D. Salinger's classic, "The Catcher in The Rye," Harper Lee's "To Kill a Mockingbird," and Nigerian author Chinua Achebe's "Things Fall Apart." "They could select any book worthy of a college-bound experience," Pourciau said.

Discovering that her creative writing students knew very little about the city of Jackson's history in the Civil Rights movement, Pourciau introduced reading about Freedom Riders and the surrounding times. In every sense of the word, her class is an exploration.

At the end of the school year, Pourciau looked ahead to a bittersweet transition in her career. After five years of building a program and forging many bonds, she prepared to return to Louisiana and begin teaching duties at Kipp Believe College Prep in New Orleans. "This has been a dream of mine," she said.

As she anticipated her new role, she was excited that she would take a tangible symbol of her alma mater with her. "Homerooms are identified by the teacher's college or university," she explained. "The W will be on my door."