Students in the Kitchen 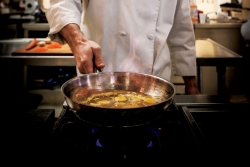 The room is decorated flawlessly: lush tablescapes, original art reflecting a well selected theme, candles, floral arrangements. It is an elegant setting for a 10-course meal, and it could easily be a fine restaurant in New York.

It's actually Shattuck Hall, home to The W's Culinary Arts program, and the setting—as well as everything to follow—is all done by students in culinary arts as part of their final exam. Students play every role that one would find in a top-tier restaurant: chef, sous chef, pastry chef, sommelier, maître d', server. It's a well-orchestrated three-hour dining experience planned, prepared and presented by students.

"At the beginning of the semester, the class as a whole elects officers to be team leaders for the event," said Chef Erich Ogle, director of the program. "They elect each position, and we talk about a theme, from a dining room and menu perspective." 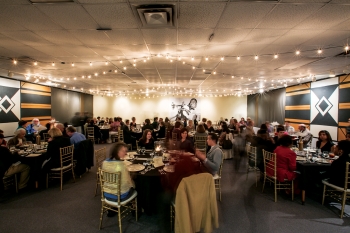 Once they agree, the class divides into committees charged with developing three to four different recipes within a category. "It's really up to the students to do everything," Ogle said. "They plan, cost the menu—everything involved." He estimates that students log several thousand hours on the project by the end of the semester. "It's a very real-world experience."

For the 15th annual finals dinner, held last November, the theme was "A Jazzy Trip Down the Mighty Mississippi." Music, food, and the dining room design reflected the theme, all selected to create a mood set by the river itself.

Following the last bite, diners gave the exhausted students a rousing round of applause. Students' efforts throughout the semester, culminating in the evening of fine dining, resulted in their grade. 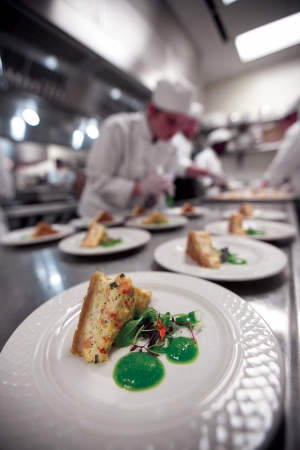 "The beauty of what we do at The W is that students not only get the fundamentals of how to cook, but the 'why,'" Ogle said. "They learn what happens to food when it's cooked, as well as the ecology of food." When possible, the culinary program uses locally sourced foods, always with an emphasis on small-quantity food preparation.

An average of 90-100 students are enrolled in an expanding program, which was established in 1996 and is part of the College of Business and Professional Studies. It not only prepares chefs, but also equips students for employment and leadership in diverse areas of food studies such as journalism, food photography and styling, nutrition and wellness, and culinary entrepreneurship. "We basically cover the industry," Ogle said. "Students can tailor their degree to their interests."

Announced last March, the Hinds partnership will allow those completing an associate's degree at the community college to finish their four-year degree on the Jackson campus with instruction from The W. Students in the program will earn a bachelor's degree in culinary arts. Courses will include, in addition to general education requirements, those in food preparation, nutrition, world cuisines, management, principles of accounting, economics, marketing, and the legal environment of business.

In November, The W announced a similar program with nearby East Mississippi Community College that will allow students completing their associate of applied science degree in hotel and restaurant management technology to seamless continue their bachelor's studies at The W; and in January, continued the expansion with the addition of ECCC; and in early March with MGCCC.

"We have a strong partnership with our community colleges, and we're happy to strengthen the pathway for students in our state to earn a bachelor's degree," said President Jim Borsig.

From a small beginning

Ogle was one of the first seven students in the then-fledgling culinary arts program that began at The W in 1996. Although he was working as a graphic designer in Columbus, he had put himself through school working at restaurants, and it was an area he loved. 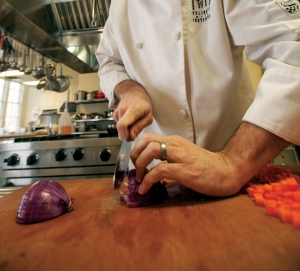 "I heard The W was starting a culinary program, and I was excited, because I was looking at other, more expensive, programs," he said.

The beginnings were humble. The kitchen was in an old home economics classroom with one refrigerator and one electric range. "It was like a kitchen in a home," he said. But The W had hired Sarah Labensky, and Ogle knew her credentials. "I was impressed with that."

Now director of hospitality and food service at EMCC Lion Hills Center and Golf Club, Labensky is the author or co-author of 14 cookbooks and a past president of the International Association of Culinary Professionals. She directed The W's Culinary Arts Institute for more than seven years.

While he was in school, Ogle worked for Old Waverly Golf Club in West Point, eventually becoming executive sous-chef. He later worked for several restaurants, including Flamingo Café with Chef Andi Bell and Cuvee Beach with Chef Stephen Vanderpool. He joined the Culinary Arts faculty in 2005 and since his arrival has worked with renowned Iron Chef Mario Batali on several NASCAR events in 2006 as well as finishing his Le Cordon Bleu Master of Arts in Gastronomy through the University of Adelaide in Australia in 2011.

One of Ogle's first students was Linkie Marais, a native of South Africa whose family had relocated to North Mississippi when she was 16. She came to The W with the intention of majoring in public relations, but she quickly fell in love with the culinary arts program. Marais is best known as a finalist in season eight of Food Network Star, and has since made many national and regional appearances. She regularly returns to The W often for demonstrations for current students and in 2013 received the Alumni Association's Outstanding Recent Graduate Award. 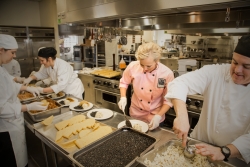 "I am so thankful for the culinary arts program at The W. With caring instructors, who dedicated each and every moment to help the students understand far more than the basics of culinary arts, I learned what it is to have goals and how to work hard to achieve them," Marais said. "Chef Erich taught me to embrace new ideas while keeping the true art of cooking and culinary intact. This gave me the confidence to tackle the culinary world with full force and has helped me achieve some of my greatest goals.

"When people see my cooking skills at live demos around the country, they immediately ask me where I went to school. I am always so proud to say that I went to The W's culinary school; this is where I found top instructors and a competitive atmosphere, while at the same time experiencing a sense of 'family caring' for everyone to achieve their goals," she added.

Ogle said, "Our students and alums work across the region. We have a big presence in the Golden Triangle, but graduates also work for organizations such as the Ritz Carlton, Kraft, restaurants, schools and hospitals. Our program is unique, and it provides unique opportunities. We're proud of its success."