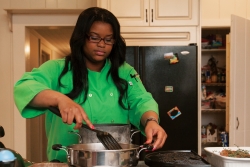 It is about 4 p.m. on a Monday evening and Quintara Wright is busy preparing dinner in the kitchen. The menu: beer braised country style pork ribs, roasted carrots and potatoes and baguettes.

Sounds like a generous meal for one person? It is. Wright is cooking for her clients--a family of four, make that five if you include the Griffin's 11-year-old Weimaraner, Polly L. Griffin.

Wright, a senior culinary arts major at The W, started working as the Griffin family's personal chef in August 2013.

There's Dr. Josh Griffin, a urologist at Columbus Urology, and Dr. Meredith Griffin, an obstetrician/gynecologist at Physicians and Surgeons OB/GYN clinic. Then there are sons Anders, who is 3-yearsold, and the youngest family member, 6-month-old Harrison. Both originally from Mississippi, the Griffins decided to move back to the area upon the completion of Josh's oncology fellowship at the University of Kansas. 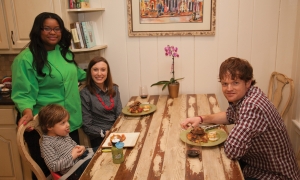 Initially, Wright was hesitant about pursuing the offer which she learned about through The W's Office of Career Services. With school and lots of involvement on campus and in student organizations, Wright was concerned that she would not have enough time to work.

"Mrs. Towanda Williams (assistant director of career services) said 'I have a family that needs you to cook for them. I think you should do it.'"

A foodie since middle school, Wright knew the personal chef opportunity could not be overlooked and would be the perfect way to fulfill her passion of cooking.

While the family was still in Kansas City, Wright and Meredith began corresponding via email to discuss the Griffins' food likes and dislikes, what the boys ate and how often Wright would cook. She works about 10-15 hours a week, Mondays, Fridays and Sundays.

"Initially, I didn't know what they liked," she said. "They always say 'try something new; use us as your guinea pigs.'"

Wright keeps it interesting with themed food nights. She has delighted the family's taste buds with Mexican, Greek, Italian and soul food.

"I've learned a lot. You only learn so much in the class," Wright said. "It has taught me to do research and learn more about the different products I cook with." 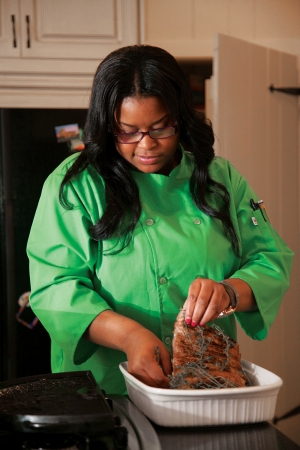 Meredith said, "We usually discuss what the next meal or two will be when Quintara is at our house cooking. We try to eat healthy but occasionally give her free rein to go all out.

"Anders is a very good eater, but Quintara quickly learned his preferences and accommodates them perfectly," she added. "Harris would love to eat what she cooks too, but for now is limited to what his two little teeth can handle."

The Griffins chose to hire Wright as a personal chef to optimize the time they had to spend at home with their boys. As full-time physicians both have very busy days and sometimes unpredictable hours.

"The best part of having Quintara as our personal chef is the freedom it gives us to devote to our children the time that we would otherwise spend in the kitchen preparing meals.

"We have found that we don't spend much more each month having a personal chef, than we would spend to eat out a few nights per week," Meredith added. "Quintara is also very good about making extra food so that we have leftovers on nights she does not cook."

Professionally, Meredith said Quintara is "an amazing chef." Personally, the Griffins said she is an amazing young lady.

"She is professional, very humble, enthusiastic and a pleasure to be around. She is accommodating of our schedules, our sometimes hectic household and our food requests," Meredith said. "We feel like Quintara is a part of our family. We enjoy being in the kitchen with her. Anders, our 3-year-old, loves talking to her about all kinds of interesting things a toddler knows."

Wright said she could not have picked a better family to cook for. "They are incredible individuals with hearts of gold. They are flexible when my schedule gets chaotic with academics and extracurricular activities."

"The biggest reward of this job is knowing that I leave this family satisfied," she added. "I am able to give them back a little of their time to spend it with the people they love the most."

Eventually, the Greenville native and her twin sister, who is in the public health program at The W, plan to move to Atlanta, Ga., to pursue their dreams.

Wright believes she is well prepared for the next step in her career. "The W's Culinary Arts Institute is the perfect place for me. The instruction I have received from the faculty has been awesome. I couldn't have made a better choice." 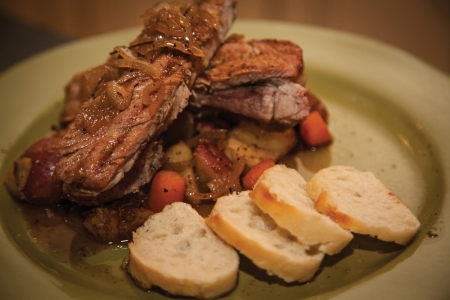 Once onions are brown, add the remaining 1 teaspoon paprika, and the beer; bring to a simmer and cook until the liquid is reduced by half, about 8 minutes, scraping up the fond on the bottom of the pot with a wooden spoon. Add the chicken broth, bay leaves and thyme; when the liquid begins to simmer, return the ribs to the pot and transfer to the oven. Cook, uncovered, turning the ribs once or twice, until the meat is almost tender, about 45 min.

While ribs are in the oven, mix the vinegar and honey. After 45 min, remove the pot from the oven and remove the ribs and set aside. Place Dutch oven on the stovetop; bring remaining liquid to a simmer over medium heat. Add the vinegar mixture and bring to a simmer, Return ribs to the pot then return the pot to the oven. Continue to braise, uncovered, until the ribs are tender, 15 to 20 more minutes. Return the pot to the stovetop and transfer the ribs to a plate. Bring the sauce to a simmer over medium heat; skim the sauce and cook until thickened, 10 to 15 minutes. Return the ribs to the pot and heat through. Cut ribs into portions and serve immediately.