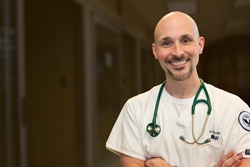 As he prepared to finish high school near Hoover, Ala., two roads diverged for Rob Smith. A talented trombonist and member of the high school band, he considered a career in music, and the comfortable path of joining his classmates as they chose to attend Alabama universities. In fact, he was offered a music scholarship to the University of Alabama.

But a childhood interest in weather offered a different option. “I had wanted to be a weatherman since I was 12 years old,” he said. Smith’s Advanced Placement aptitude in the sciences gave him the credentials to earn an academic scholarship, and so he chose the road less traveled. He entered the then-fledgling meteorology program at Mississippi State University.

“It was the early days of meteorology at MSU, and we dialed up on a modem to get four weather maps a day,” he recalled.

For many years, the love of weather and the career choice served Smith well. He was able to land a full-time job as a weathercaster with WCBI-TV in Columbus during his senior year at MSU. And, with only a few years’ interruption to take jobs in other markets, he returned to WCBI, where he became a well-respected personality on the CBS affiliate for 14 years, serving as chief meteorologist.

Smith loved the weather. More importantly, he loved explaining it. “I always want to know what I don’t know,” he said. “I’ve always had an insatiable thirst for knowledge. And I like to explain things to people.”

Weathercasting gave him a chance to do that. He enjoyed the challenge of taking a complex explanation for the physics and science behind the weather and putting it into language that viewers could make sense of. That talent was especially important during weather crises, when his television shifts could stretch to 30 hours straight.

“Mississippi tends to have a lot of weather events,” he observed. “Reporting during those times can mean life or death to viewers.”

But, after 14 years, Smith took a step back and analyzed his career and his future. His two young children often were still at school when he left for work and in bed when he returned. He saw them growing up without their dad as a daily presence.

“I could go an entire week without seeing my children,” he recalled.

“WCBI was extremely supportive and flexible about giving me family time,” he said. Meanwhile, he saw the nature of the business changing as mobile media gained increasing popularity with consumers and local television adjusted. The result: “I began to rethink my career goals.”

It was then he fell back on his high school aptitude for science and math. “I briefly considered the medical school path and becoming a doctor,” he laughed. Instead, he looked to nearby MUW, where he was accepted into The W’s highly recognized nursing program.

“I did my homework and studied about the career,” he recalled. “To be a nurse is not to have just one job. There are a multitude of jobs in the field: clinical, administrative, educational. I liked that there were career paths beyond becoming a registered nurse.”

And so, he changed directions. He began his studies while still a fulltime weathercaster, but, he said, “It quickly became apparent that I wouldn’t be able to sustain both.”

Once again, he chose the road less traveled. He gave up the safety net of his job and became a full-time student. There would be plenty of short-term sacrifices for long-term gain. Now a senior with graduation ahead in May 2013, Smith has excelled in his studies, making just two Bs in the bachelor’s of nursing program. He describes the MUW curriculum as “difficult” in the most positive sense of that word.

“MUW should be proud that they challenge students,” Smith said. “When you leave, you know that you’ve accomplished something significant. You’re qualified to be an excellent nurse, but you know you can also think critically and prioritize. They’ve trained us to think exactly how a nurse should think.”

That’s a real advantage to MUW nursing students, he added. “The MUW program is recognized by the nursing community. Hiring managers know that if you finish this program, you really know the field.”

As he nears 40, Smith said he has especially appreciated the opportunities he’s been presented. “At this age, I see the value of learning for learning’s sake,” he said. “It’s a case of doing the work to understand what you need to understand. In a crisis situation, that ‘A’ you made really doesn’t matter; what you know, does.”

Last summer, Smith interned at Baptist Memorial Hospital in Columbus, where he worked in cardiothoracic care. It was something he felt was a real fit. “I think I’d like to work in the critical care environment, perhaps a cardiovascular ICU.” But, with many options open, there could be different roads that diverge, perhaps even that of nursing school instructor.

True to his earlier career, Smith is drawn to the challenge of taking difficult concepts and explaining them to others. “I like the puzzle,” he said. “I like figuring out what’s wrong. In doing that, the patients I serve will get better care.”

In this new phase of his life, Smith continues to follow the road less traveled. And for him, that has made all the difference.