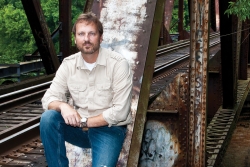 All the cities you once knew are gone. Biloxi. Gulfport. Ocean Springs. The Gulf of casinos, water-fronted mansions, seafood restaurants, quickstop gas stations and grocery marts, destroyed and gone. In Michael Farris Smith's novel, "Rivers," (Simon & Schuster, Sept. 2013) the familiar Gulf landscape suffers an irreversible transformation, the product of unrelenting hurricanes and pounding rains that gather intensity and wreak destruction on both the physical and moral landscape.

It is a sinister and unrecognizable place, the anti-Coast, with sun-drenched beaches and Coppertone smells of countless Mississippi vacations a distant memory. The government has abandoned the drowning land, where few structures survive, where rats teem in unsuspecting hideouts and where bands of soggy scavengers are more likely foe than friend.

In this world, the government draws a line 90 miles north of the coast and declares everything below a no-man's land. But some few hang on—to their memories, desperate shreds of survival or greed. Some believe there are trunks of casino money buried and waiting to be discovered. 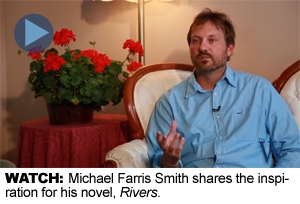 Against this landscape, Smith introduces a cast of characters who form unlikely allegiances and harbor life changing secrets. Like the storms that beat around them, the characters find their actions building to a powerful crescendo. The novel has won early praise from writers such as James Lee Burke, who said:

"Every once in a while an author comes along who's in love with art and the written language and image and literary experiment and the complexity of his characters and the great mysteries that lie just on the other side of the physical world, writers like William Faulkner and Cormac McCarthy and Annie Proulx. You can add Michael Farris Smith's name to the list."

Released in September, "Rivers" is The W's selection for the 2013 Common Reading Initiative. Throughout the fall, Smith is being featured in book signings across the state and the region and was a featured writer at the annual Eudora Welty Writers' Symposium.

Associate professor of English at The W, Smith is a native Mississippian who grew up in McComb, within the shadow of the Gulf Coast. A preacher's son, he was particularly captured by the sounds and rhythms of gospel music, which he believes helped shape his narrative voice. 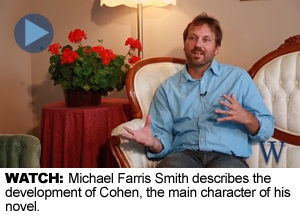 "When I had the idea for this novel in the fall of 2009, Katrina was on my mind," he recalled. "Like everyone else, I knew folks who were in the path, and I recalled the days after and wondering what happened to them. We all were affected."

As his idea developed, he knew he didn't want the novel to be a realistic recreation of the past. "I really wanted to step out on a ledge," he said. His goal was "to put the reader in a headlock from the very beginning."

And with the opening lines, he does that:

"It had been raining for weeks. Maybe months. He had forgotten the last day that it hadn't rained, when the storms gave way to the pale blue of the Gulf sky, when the birds flew and the clouds were white and the sunshine glistened across the drenched land. It rained now, a straight rain, not the diagonal, attacking rain, and it seemed that the last of the gusts had moved on sometime during the night and he wanted to get out." 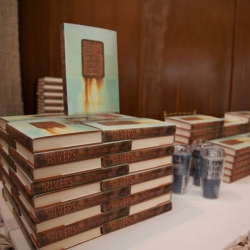 The winter of 2010, as Smith was writing "Rivers," he recalled that it rained almost every day. "Everyone in my household would get up in the morning and say, 'oh no,' and I would think, 'good.'" As he worked in his study, fronted by a big window, Smith saw a literal world that helped shape the fictional world he was creating.

And as he wrote, two things happened that propelled the future publication of "Rivers." He applied for and received a Mississippi Arts Commission artist fellowship based on the first 25 pages of his draft novel. Coinciding with that, The W hosted the Southern Literary Festival, where he was asked to read. 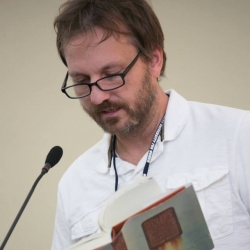 "I wanted to read something new and different, so I read from the work in progress," he said. It got such a tremendous response that he knew he must be on the right track.

Writing around his teaching load, he finished the novel in about a year and a half and began to carefully look around for an agent. "I sent queries to around 10 agents," he said. "Five or six wanted to see the manuscript."

This affirmation came after any number of rejections and "a tremendous amount of doubt," Smith said. "I had had some success with my novella, 'Hands of Strangers,' but the idea for the novel was very different." When he found agent Peter Steinberg, he felt confident about the future of his book. "He knew my first publisher, and he had worked with Mississippi writers."

After 90,000 words, six months of revisions, and countless discussions, "Rivers" became a reality. There currently is a film agent for the book and the possibility that it will one day also become a movie.

Perhaps Smith's background didn't prepare him to become a novelist, but his life experiences did. He attended Mississippi State University, where he majored in communication with a public relations emphasis. By his own description, he wasn't an outstanding student. "I was interested in sports," he said.

He fell into a sports marketing job with the NBA and worked for a couple of years in Europe, where "I had plenty of time. I started reading." Never a serious reader, Smith said he started with the big names: Faulkner, Hemingway, Dickens. "It turns out, that was a good place to start," he said. 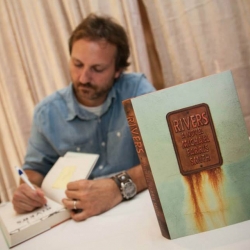 But his turning point came when he discovered Mississippi writer Larry Brown. "I said, 'I know those people,'" Smith recalled. When he returned to the United States, he took a chance and applied for the writing program at The University of Southern Mississippi.

"I didn't impress them with my grades," he laughed. "I think the European experienced helped." He admits that the first year of the challenging program was difficult. "I was intimidated but not scared," he said, noting that "you can be paralyzed by that or face it." By 2002, he had published three stories, affirming not only his ability but offering what Smith described as "another moment of propulsion."

After completing the program, he taught at Auburn University before coming to The W in 2007. "Rivers" was written in Columbus.

While the book has all the hallmarks of success, Smith is not resting from his labors of love. "I'm about 10,000 words into a new novel," he said. Although he won't reveal the details, he said that when he began "Rivers," it had "an intense, emotional feel about it. I have the same feeling about this book."

As he writes, he said he sometimes likes to read authors whose books have similar styles or subjects. "I couldn't find anything like this," he said.

Once again, Smith is on a ledge. And once again, he's taking a now-signature creative leap.