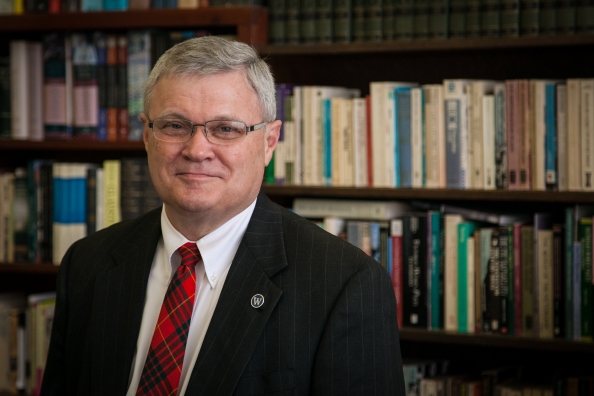 Richardson’s latest project will keep him busy for the next 10 years – or more.

Don’t worry, though, because Richardson, the Eudora Welty Professor of English at Mississippi University for Women, is excited about his work as series editor for the Edinburgh Critical Edition of the Works of John Gibson Lockhart.

The first piece of Richardson’s latest historical puzzle -- “Some Passages in the Life of Mr. Adam Blair, Minister of the Gospel at Cross-Meikle” – was recently published.

“There is a happy sense of accomplishment in tracking down obscure references,” Richardson said. “It sometimes takes days to complete a note, but sometimes I have to give up and say ‘unidentified.’ I love the literature, and making well-edited texts of significant literature widely available to students and scholars is an important contribution to my profession.”

Written by John Gibson Lockhart (1794-1854), “Adam Blair” is the story of a Church of Scotland minister who, after the death of his wife, has a close relationship with a family friend, Charlotte, who is in an unhappy — even abusive — marriage. A brief sexual relationship has tragic consequences for both Adam and Charlotte and impacts the entire community.

Richardson has been interested in the works of Lockhart ever since he spent a year studying Scottish literature at the University of Edinburgh in 1972-73, which was when he first read “Adam Blair.” In 1984-85, Richardson taught in the Department of Scottish Literature at the University of Glasgow as the first Glasgow Herald Visiting Fellow. He said he was able to devote time during that academic year to research on Lockhart in London and at the National Library of Scotland in Edinburgh. Since then, Richardson has made many research trips to Scotland to work on Lockhart material, as well as other Scottish writers of the same time period.

Richardson said Lockhart’s work has never been collected, and there has never been a scholarly edition of any individual works, so he proposed to Edinburgh University Press a critical edition of Lockhart’s works. Other volumes in preparation include “Peter’s Letters,” which has co-editors in Edinburgh and Manchester; “Valerius,” another novel, which is being edited by someone in Edinburgh; and “The History of Matthew Wald,” a novel, which Richardson is editing.

“Peter’s Letters” and “Matthew Wald” should be completed in the next few months and published in the summer or fall 2021. Other volumes to follow will be the fourth novel, “Reginald Dalton”; a collection of poetry; editions of Lockhart’s contributions to Blackwood’s Edinburgh Magazine and the Quarterly Review; editions of the biographies of Robert Burns and Lockhart’s father-in-law, Sir Walter Scott; and a collection of miscellaneous publications from periodicals and annuals. The edition also will include a collection of Lockhart’s letters.

Each volume editor of the critical edition is responsible for establishing an authoritative text of the Lockhart work; providing an introduction that addresses the history of the writing of the work, the literary and historical context, early critical reception, and a textual study; providing thorough explanatory notes that identify and explain references within the text; and if necessary, including a glossary of Scots words and other words that might not be familiar to most readers.

“My typical research trips to Scotland mean working in the National Library of Scotland from the time it opens until the time it closes, six days a week,” Richardson said. “It is a wonderful library with very friendly and helpful staff. There is nothing I would rather be doing than spending a day of research in a library.”

Richardson said the COVID-19 pandemic has disrupted his plans for the project multiple times. But he said he has an advisory board of experienced researchers/editors that will assist him in recommending editors and contents of the edition and help identifying references in the works. Members of the board are from Scotland, England, Canada and the United States.

“Now that the project is well under way, I will be working on a tentative publication schedule for various volumes over the next few years,” Richardson said. “I think it is important to have volumes published on regular intervals to keep up interest in the project.”

FOR IMMEDIATE RELEASE
Oct. 23, 2020
Contact: Adam Minichino
This email address is being protected from spambots. You need JavaScript enabled to view it.
(662) 329-1976