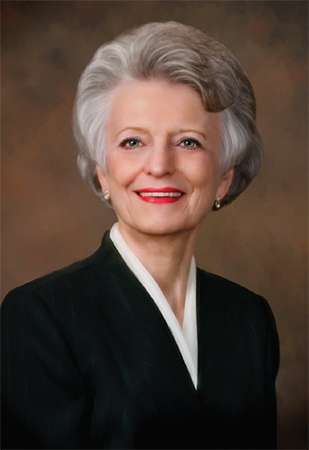 Bettye Rogers Coward '65, retired president of Blue Mountain College, was honored by alumni and friends as the recipient of Mississippi College’s Award of Excellence in October.

Coward was named Blue Mountain College’s seventh president in 2001, succeeding Harold Fisher after he served 35 years as the institution’s leader. She became the school’s first woman president. Th e once all-female Baptist-affiliated school in north Mississippi dates back to 1873.

She joined Blue Mountain post after her service as academic vice president at Mississippi College. Coward was an award-winner as a professor and chair of the MC Department of Family & Consumer Sciences and Health Education. In 1990, MC students and faculty named her the university’s Distinguished Professor of the Year.

Coward received her associate’s degree from Jones County Junior College in Ellisville in 1963. She graduated with her bachelor’s degree at Mississippi University for Women in 1965. She received her master’s in 1966 and doctorate in higher education administration in 1976 from the University of Southern Mississippi.

A native of Hattiesburg, Coward and her husband, Tom, currently reside in the Jacksonville, Fla., area.