Thomas Haffey has taken numerous Mississippi University for Women students to conferences throughout the country. 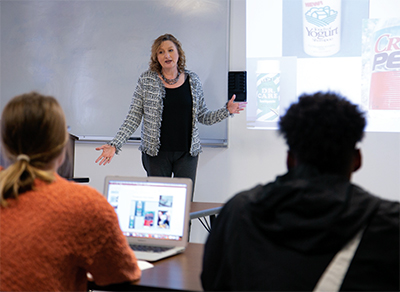 On June 24-27, 2019, Kylie Odom and Hallie Cole finished in the top 10 in their categories at the annual event, which features the top two or three competitors from each state in their respective events.

Odom, who is from Quitman and graduated from The W in May 2019 with a marketing degree, finished third in the nation in retail management and fifth in the nation in marketing concepts. Cole, a senior accounting major from Winfield, Alabama, finished sixth in marketing analysis and decision making. She also represented the state of Mississippi in accounting principles in which she previously finished second at the State Leadership Conference, which The W hosted in the spring of 2019.

“It was super fun,” said Cole, who had never been to Texas. “I went to a few workshops that were fun and informative.”

Iyonna Collins, a senior accounting major from Grenada, also represented The W and the state of Mississippi in personal finance. She finished second in that category at the State Leadership Conference.

“Not only is it an honor to represent The W and the state of Mississippi by just qualifying to compete, but to place in the top 10 at the NLC truly is an outstanding achievement that should help our students’ resumes and job prospects immensely,” said Haffey, an instructor of marketing and management and an advisor for Phi Beta Lambda.

Cole said she was happy she placed in marketing analysis and decision making after a first-place showing with two other people at the state conference. But Cole said she had to compete at the national conference by herself because her teammates couldn’t go. As a result, Cole, who hadn’t taken a marketing class until the first semester of her senior year at The W, made it past the production test phase to make a presentation in front of the judges.

“I felt really good about my presentation,” Cole said. “I was very excited that I placed sixth.”

In all, there are more than 50 competitive events at the NLC. Haffey said it was wonderful to see The W’s business students compete against the other schools in the state of Mississippi and at the national level as well.

There also were multiple workshops presented on topics related to business, leadership and career success available to students and advisors at the conference.

Haffey and the students also attended multiple workshops on topics related to business, leadership and career success and enjoyed the sights of San Antonio, including the River Walk and the Alamo.

Dr. Dee A. Larson, the department chair, coordinator of the graduate studies in Business and a professor of Marketing and Management, said the accomplishments of the students is a testament to their hard work and the quality of instruction—led by Haffey—they receive at The W. She said The W continues to show it has the ability to compete against schools with larger departments and student bodies.

“I’m proud of the hard work the PBL students have put into their events and thrilled with their accomplishments,” Larson said. “We have an impressive track record of winners at the state and national levels and the students this year helped to continue the ‘Long Blue Line’ of excellence.”

In April, The W’s College of Business and Professional Studies added to that excellence when its Tennessee Valley Authority (TVA) Club team to finish first in the TVA Investment Challenge for the 2018 investment year. The team featured Cole, who was club president, Josiah Shikhule, the vice president, Britain Welzien, who is from Ridgeland, and Sam Harvey, who is from Columbus. Dr. Andrew Luccasen, professor of economics and finance in The W’s College of Business and Professional Studies, is the club’s adviser, were honored April 8-9 in Nashville, Tennessee. Neither student imagined, though, they would be part of managing more than a half a million dollars.

The title is The W’s third (2000, 2011) in the 20 years of the competition. In addition to beating the Standard & Poor’s 500 Index (S&P), The W team also posted positive returns overall. It was one of two teams to accomplish the feat.

“It is like our baby, pretty much,” said Cole, who is from Winfield, Alabama.

In 1998, TVA created the Investment Challenge by allocating $1.9 million to 19 universities to manage in investment portfolios. TVA added six schools to the program in 2003 and increased the portfolio amount to $10 million. A TVA asset retirement trust fund provided the original $1.9 million for the program and the additional $8 million to expand it.

Universities can earn performance awards based on their returns versus the benchmark S&P 500 index.

Cole said she is incorporating a lot of the things she learned in the TVA Investment Challenge and at the national conference, like the importance of “key words” and product, place, promotion, and price, and how she will apply those marketing concepts to her major.

“They gave a lot of great tips,” Cole said. “They showed us the importance of networking and connecting with others in the field. More students need to get involved so they can take advantage of the opportunity.”

In addition to his role as advisor, Haffey was chosen to present his ongoing research project “Sales Training Lessons From ‘The Office.’” The project uses video clips from the popular television show as a pedagogical tool to enhance the audience’s engagement with and retention of the topic or lesson being presented. He previously presented on the topic at The W’s 2017 Provost’s Junior Faculty Symposium.

After the NLC, Haffey was asked to present the project to the FBLA-PBL State Fall Leadership Conference on Oct. 22, 2019, at East Central Community College in Decatur.