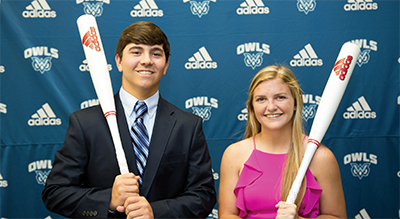 At the heart of an athlete is the desire to be first. The desire to be the best at their position. The desire for their team to succeed. The desire to win. An opportunity to set the standard, to make history or to become the first to be first brings a whole new level of excitement and desire. “Anything is possible. It’s crazy,” said Anna Kate O’Bryant.

Since the age of five, O’Bryant has been a part of a family, a group of similar-aged girls who gather on a field to play a sport. She described the chance to join The W’s family as an opportunity that “just clicked.” O’Bryant was one the first student-athletes to commit to playing for the Owls. At New Hope High School, she has held the position of second baseman for both the slow-pitch and fast pitch teams since her sophomore year while also being a member of the Trojan’s soccer team.

“I met with Coach (Tatjana) Matthews and Athletic Director Jason Trufant and it all fell into place,” described O’Bryant. “We talked about the direction of the program, practice and Coach Matthews talked about how she wanted to get the family involved. It all made sense,” O’Bryant said.

A new team, a new coach and new drills excite O’Bryant about coming to The W.

“To come and be part of the first team, to be the standard, is an honor,” she said.

At an early age, Brandon Jones realized his dream was to play baseball at a collegiate level. He developed a love for the game from the countless innings in his backyard with his older brother and cousins. When the opportunity arose to continue to play in his “backyard,” it was an opportunity that he could not pass up.

“When I first heard the announcement, I was interested. It’s here. It’s home,” said Jones. “I texted Coach Matt Wolfenbarger and told him I wanted to play.”

A graduate of Heritage Academy, Jones has fielded the position of second basemen for the Patriots since he was a freshman.

Jones has been playing basketball in the Pohl gym with friends since he was in the sixth grade. In his words, “I live five minutes down the road.” But, when he came for his campus tour, met with faculty and talked more with Coach Wolfenbarger, he knew The W was his future home.

“Being the first team to win something here excites me. That would be great,” said Jones. “I want to do something for the university. I want to do the best I can. I want to build a championship program here.”

Both O’Bryant and Jones came to campus looking for an opportunity. They found a family, a team and a home. They discovered a place they could trust with both their academic future and their future between the white lines and foul poles.