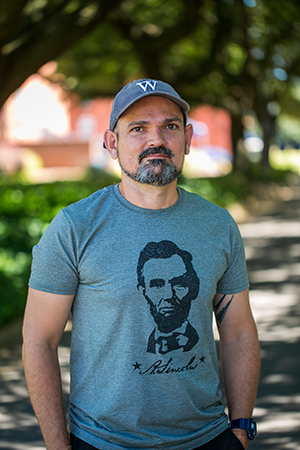 Thanks to the Peyton Scholarship, Francisco “Franco” Lopes had “the best summer of his life” and is pursuing his passion of teaching.

Lopes loves the process of teaching to help someone.

That’s why the 44-year-old native of Brazil points to his time teaching English to kids in Japan as some of his most memorable work.

The impact Lopes made on the lives of Japanese children motivated him to come to the United States and earn a license to teach.

It took Lopes four years from his first visit to the Mississippi University for Women to return to the campus to begin his studies, but he is making the most of his opportunity thanks to the Peyton Scholarship.

Lopes, who is majoring in history, added to his experience during the summer when he traveled to Washington, D.C., to do an internship at the United States Commission for the Preservation of American Heritage Abroad. The work allowed Lopes to immerse himself in so many different forms of history, including talks with people about the Holocaust. Lopes plans to use the interviews he did with survivors and their children in work for his Capstone project.

Lopes worked as a translator in Japan and attended Central Bible College in Tokyo and earned a bachelor’s degree in theology. As he studied, Lopes, who is married and has a daughter, realized his work as a teacher was having an impact on him. His interest in going to school to become a teacher led him to find a connection with The W. It just so happened that someone Lopes knew was going to talk to Dr. Brenda Dickey, an assistant professor of education at The W who used to live in Japan.

The conversation Lopes had with Dickey sealed the deal.

“I showed Dr. Dickey how I used my drawing with the kids and I showed her the newspapers I made for them,” Lopes said. “She said you have to go to America and you have to get a degree because you’re going to be a great teacher. She really made me feel good about what I was doing.”

Lopes said he and his family saved money for the next three or four years so he would be able to come to the U.S. to realize his dream. They had to take the Standardized Aptitude Test (SAT) and that it was really hard, but thanks to financial help from his father in law the goal was slowly becoming more of a reality.

With a wife, Makie, and a daughter, Emma, to care for Lopes wasn’t sure if he would be able to work a full-time job and go to school. He also realized he wanted to pursue a love for history rather than education, which helped pave the way for him to apply and, ultimately, to earn the Peyton Scholarship. The financial assistance Lopes has received since his junior year has allowed him to provide for his family while completing his studies. He plans to graduate in May 2020 and become a history teacher.

Dr. Erin Kempker, a professor of history and chair of the Department of History, Political Science & Geography at The W, said the Peyton Scholarship has opened doors for Lopes that ordinarily would have been closed to him. His internship at the United States Commission for the Preservation of American Heritage Abroad during the summer in Washington, D.C., combined his interests in history and preservation with education and world cultures.

“The department is proud of Franco’s initiative and his commitment to taking what he learns and sharing it with his students in a K-12 setting,” Kempker said. “Mississippi needs teachers, and it is Franco’s goal to teach history in an underserved area in the state. We are so pleased Peyton funding could support him in this effort, and we know he will be a positive force in Mississippi classrooms for decades to come.”

Lopes said he initially thought he would like to teach elementary school kids, but he said he has changed his focus to teach high-schoolers. He said he wants to begin his professional career at the junior high level because he has a passion for kids who don't believe in themselves.

Lopes said there is a possibility he could go back to college to pursue an advanced degree so he could become a professor, but he isn’t going to look that far into the future just yet, even though he prefers to keep looking ahead rather than behind him. He referred to the time he spent as an intern in Washington, D.C. as “the best summer of his life.” He said all of the museums he visited helped to make up for the difficulty being away from his family. Lopes said the investment was worth it because it was going to help them all in the future – as well as all of the students who will benefit from Lopes’ experience.

Lopes said none of it would have been possible without the Peyton Scholarship.

“It means love,” Lopes said of the Peyton Scholarship. “It means I belong to some place. I left my house and I was 19 years old. To pursue my studies was really hard. When I came to The W nobody knew me. I had to pay $9,000 per semester. Nobody could help me because they didn't know me. But Dr. Jim Borsig (the former president of The W) and all of the professors made me feel welcome. Little by little, working hard in my studies and in my jobs on campus, people started knowing who I am.

“Now, after I returned from Washington, D.C., and I posted on Facebook that I am back in Mississippi, many people said, ‘Welcome home.’ That was so touching for me because I said this is my home. A lot of people trust me and have invested in me. They were very generous with me with these scholarships. I am very blessed. We are 100% sure this is the best place we could have come and that this was the best choice. I have zero regrets about coming to The W.”