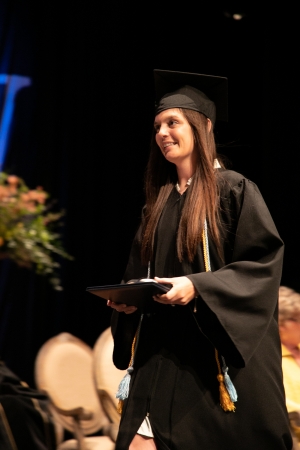 Instead, Caroline said her parents, Amy and Chris Greer, always encouraged her to do her best. That example enabled Caroline to learn how hard she needed to work to make good grades and how dedicated she needed to be to her studies.

Years later, Caroline Greer can look back and easily point to how she became an award-winning student at Mississippi University for Women.

“I made school a priority every semester in college and made sure I gave 100% every day regardless of what was occurring in my life outside of school,” said Greer, a senior from New Albany. “This was a very demanding task, but in the end it paid off.”

Greer’s hard work recently earned her the Harvey Craft Award, which is given to graduates with the highest grade-point average. Greer, who has a 4.0 GPA as an elementary education major, graduated from The W May 7, 2022.

The award comes on the heels of Greer receiving the Linda Anglin Teacher Preparation Scholarship from the Mississippi Professional Educators (MPE). Greer credits her grandmother, Barbara Simpson, who taught third grade for 31 years at East Union Attendance Center, and her father, Chris, who has been a teacher and coach for 29 years at Lafayette High School, Potts Camp Attendance Center and Myrtle Attendance Center, for giving her the passion to become a teacher. She said her parents set her on that path at an early age by instilling in her that it was important to give her best in everything she did.

“As a child, success in school did not come easy for me. I had to work hard to make good grades,” Greer said. “As I grew up, I knew if I wanted to continue to have success in school I would have to be dedicated to my studies.”

Greer admits it has been demanding to maintain a 4.0 GPA and that schoolwork has at times made her feel overwhelmed and exhausted, but she said she never burned out thanks in part to a love for learning that helped her stay motivated and find enjoyment from school.

Dr. Hope Durst, an instructor in residence at The W’s School of Education, wrote a letter of recommendation in hopes of helping Greer earn a job as a teacher. She said Greer’s character sets her apart.

“Caroline often worked so far ahead in content that she made herself available to meet classmates in the library and dorm rooms for coaching and support,” Durst said. “It was not unusual to find Caroline in the background of Zoom support calls with my students because she was there with them to help them brainstorm, create engaging learning opportunities and motivate them to meet their goals, but that’s Caroline. She is in the background, cheering you on.”

In her letter of recommendation, Durst writes that every now and then teachers have the pleasure of working with “extra special students” they know who are going places and who will have a positive impact in any situation. She said Greer’s confidence and compassion made her that student.

“Caroline has the natural confidence of a seasoned educator,” Durst said. “She worked beautifully with students, providing them just the right amount of motivation, praise and direction to send them confidently into the next objective. Caroline exudes confidence that transfers to her eager students.”

Greer recently showcased that confidence when she was one of the featured presenters at the Gordy Honors College’s Spring Research Symposium. Greer’s presentation was titled “The Impact of Using Best Practices to Improve English Language Arts Standardized Test Scores in Rural Central Mississippi Schools.” Greer said entering the Ina A. Gordy Honors College as a freshman forced her to be on her “A game” from day one. She said her organizational skills and willingness to work ahead allowed her to excel and, ultimately, to earn recognition as an award-winning student.

“Ever since early elementary, I have been intrinsically motivated to do my best,” Greer said. “An A in each class was always my goal all throughout college, but I knew at the end of the day as long as I tried my best I would be proud of the grade I earned.”

FOR IMMEDIATE RELEASE
May 19, 2022
Contact: Adam Minichino
This email address is being protected from spambots. You need JavaScript enabled to view it.
(662) 329-1976