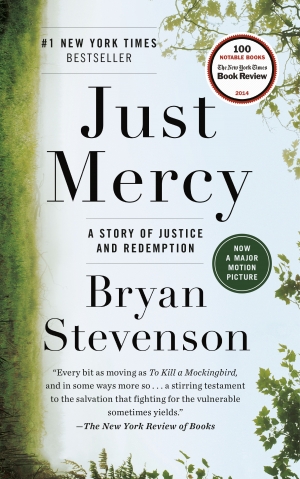 Clay, who is general counsel for Mississippi University for Women, enjoyed Bryan Stevenson’s story about a young lawyer’s coming of age and a look into the lives of those he has defended that argues for compassion in the pursuit of justice. That’s why it was easy for Clay and Mims to recommend the book to the Common Read Committee.

“Stevenson inspires his readers to think deeply — and to ask why these things happened and why these stories matter,” said Clay, who is a member of the Common Read Committee with Mims. “The hope is, I think, if we can see the common humanity in others, we can become better. We can become better citizens and a better community.”

Called one of the most influential books of the last decade, the New York Times bestseller “Just Mercy” will be the 2021-22 Common Read at The W.

Amanda Clay Powers, professor and dean of library services at The W’s Fant Memorial Library, said each member of the Common Read Committee took the recommendations of Clay and Mims and was blown away by “Just Mercy.” Powers, who has been on the Common Read Committee since 2016, said it is a huge undertaking to select a book that will appeal to the campus, but she said Stevenson’s book fits the bill.

“The committee enjoyed Stevenson’s gorgeous and powerful writing,” Powers said. “It was an added bonus that the author’s Equal Justice Initiative is headquartered in Montgomery, Alabama, and provides legal representation to people who have been illegally convicted, unfairly sentenced or abused in state jails and prisons.”

Powers, who is chair of the Common Read Committee, said she hopes to take a group to see the National Memorial for Peace and Justice and the Legacy Museum in Montgomery as part of the programming for the Common Read.

Powers said the committee’s goal is to evolve the Common Reading Initiative to meet the needs of The W campus and beyond.

“We are excited this year for the first time to work to involve the Columbus community in our programming around ‘Just Mercy,’ ” Powers said. “We believe the book has a very broad appeal, and we look forward to the rich conversations that can happen around the reading of it.”

Mims, a teacher, influencer and mentor whose career at The W began in 1967, recalls watching a segment on the TV news show “60 Minutes” about Stevenson and the Walter McMillian case four or five years ago. She said the story deeply affected her and she immediately read Stevenson’s book when it was published. Mims feels “Just Mercy” is a good choice for The W’s Common Read because it highlights injustices, and unfairness people see and hear about every day -- not just in the criminal justice system, but in all walks of life.

“My take-away quote from the book is when Stevenson brought the news of the denial of an appeal to McMillian’s family,” Mims said. “Their hopes were dashed and they felt there was nothing else they could do. Stevenson responded, ‘There is always something we can do.’

“Not all of our MUW students can be lawyers. None of us, acting alone, can right the wrongs of our social justice system. We can’t eradicate poverty or crime, but there is always something we can do. That’s what I want our students to take away from this book.”

Clay is looking forward to discussing “Just Mercy” and encourages those at The W and in the community to get involved.

“Through his work with the Equal Justice Initiative, Stevenson tells stories of individuals facing incredible hardships, many of them at no fault of their own,” Clay said. “These individuals are often misunderstood, and frankly, further hurt by a society and legal system that should have protected them.”

The goal of the Common Reading Initiative is to develop intellectual community among students, staff and faculty outside the traditional classroom, to foster intellectual curiosity, inquiry and responsibility among all groups, to deepen understanding of issues raised in significant books and to provide opportunities for faculty, staff and students to engage socially in meaningful ways.

The Common Read will last through Spring 2022.

If you are interested in participating in the Common read, please contact Powers at (662) 329-7336, or email her at This email address is being protected from spambots. You need JavaScript enabled to view it..

FOR IMMEDIATE RELEASE
June 24, 2021
Contact: Adam Minichino
This email address is being protected from spambots. You need JavaScript enabled to view it.
(662) 329-1976