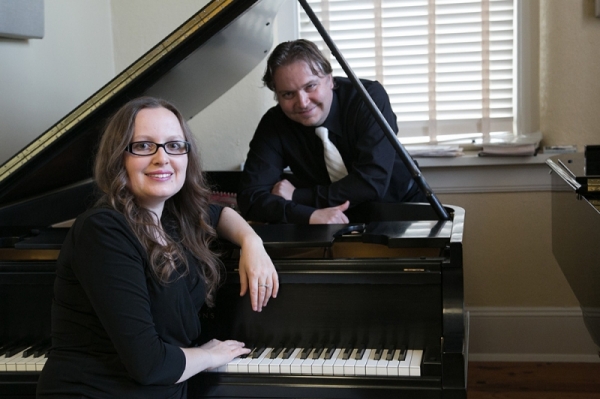 “We are not aware of another album in the two-piano medium fully dedicated to music written by women. Moreover, this album aims to bring our audiences musical works with great artistic value that were popular during their time, but that are unfortunately not as well-known nor heard today mostly due to history erasing them from the performance canon due to the gender of their creators,” said Mortyakova, who is also chair of The W’s music department.

Titled “Music by Women,” the album was recorded and produced in the summer and fall of 2020, and it represents the duo’s second album release following “Journey for Two” which was released in 2018. “Music by Women” features work by women composers from different musical eras and countries including England, France, Russia and the United States.

“Music by Women” is available on iTunes, Spotify, Amazon, CD Baby, and a variety of other streaming services.

Following their debut album, the duo aimed to focus their attention on music written by composers who are not necessarily part of the mainstream performance canon. Given Dr. Mortyakova’s life-long commitment to promoting the works of women composers, this album came as a natural progression.

Bogdan, associate professor of music, said, “As musicians, we constantly aim to push our artistic boundaries and challenge ourselves to constantly grow, both technically and creatively. This album represents just that. We were able to showcase a wide variety of works from multiple musical eras which not only showcase the composers but also the Mortyakova/Bogdan piano duo.”

Over a two-year time period, the duo researched, compiled and performed the repertoire on the album, including recitals throughout the United States and internationally in Italy, Russia and Romania. In 2020, the duo also performed several virtual concerts that were watched throughout the world.

Mortyakova and Bogdan have appeared as duo piano soloists with the Assisi Performing Arts Festival Orchestra in Italy and the Starkville Symphony Orchestra in Columbus, Mississippi. They were the winners of “Audience Choice Awards” for 2018/2019 at the Spread Spectrum Festival of Modern Academic Art.

FOR IMMEDIATE RELEASE
May 17, 2021
Contact: Tyler Wheat
(662) 241-7683
This email address is being protected from spambots. You need JavaScript enabled to view it.