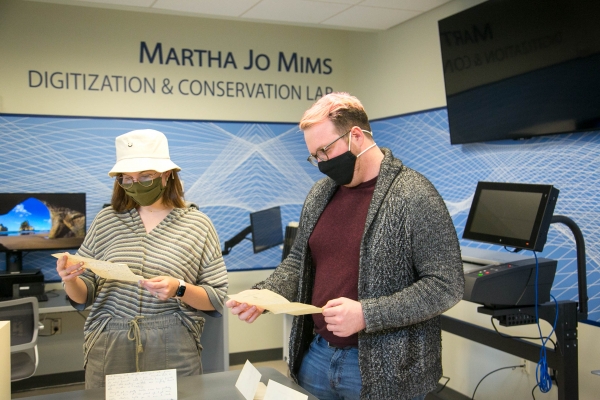 “The Ellard-Murphree-Pilgreen-Smith Family Papers Collection is a social history that captures the lives of a community in letters. Told through the correspondence between family and friends across decades, this collection highlights the beauty of normal, everyday relationships and moments. This is a one-of-a-kind collection and it would be difficult to find another with the breadth of the Smith Family Papers that so wonderfully depicts the lives of Mississippians in 20th century America,” said Victoria Jones, archives and special collections librarian at The W.

With the earliest letter dating 1908, the Ellard-Murphree-Pilgreen-Smith Collection includes letters and diaries among family members and friends, with most letters from members of the Smith Family--Pauline and Sam H, and their children, Bernice, Christine, Martha and Sam E often referred to as “Sonny Boy.”

Several Letters feature the writings of Sam H. Smith, who served as a senator between 1932 and 1936, to Bernice, Christine and Martha who each attended the Mississippi State College for Women between approximately 1931 and 1938. Other letters feature the correspondences detailing a Mississippi family’s life moving from subsistence farming to the modern era, the Korean War, race relations and state government.

Jones said, “This collection covers so many great topics. However, some of the most interesting and most prevalent are World War II, rural life and women’s issues in the 20th century. The focus on women’s issues, interests and perspectives make it an excellent addition to the Beulah Culbertson Archives and Special Collections and making it the place to research Mississippi women’s history.”

The collection was donated to the university by the heir of the letters Dr. Bridget Pieschel, who wrote “Loyal Daughters: One Hundred Years at Mississippi University for Women, 1884-1984” and “Golden Days: Reminisces of Alumnae, Mississippi State College for Women, 1926-1957.” Pieschel received her bachelor’s and master’s degrees in English from The W. In May 2020, she was awarded emerita status after serving the university 39 years.

Pieschel is the granddaughter of state senator Samuel Hawkins Smith and niece of Bernice, Christine and Martha Smith.

“I have many favorite letters. My ego enjoys the letters grandmother writes describing what a brilliant and talented baby I was! My heart breaks when I read the diary entries describing my grandfather’s last days dying of stomach cancer. Grandmother and Granddaddy had a real love match and one of equal respect,” said Pieschel about the letters.

The collection also includes diary entries of Smith’s grandmother who wrote a diary entry every day from 1939 until she died in 1977. Her father kept a diary from 1956 (the year he married) until 2007.

Pieschel explained, “My huge extended family kept up with the day to day details about their lives---what they ate, what they spent, how they earned money, who they saw, who was born and who had died---sometimes even who was in jail or other desperate straits. The details are written in clear and matter-of-fact language, with little use of euphemism or sense of embarrassment.”

For her, there isn’t a better place for the collection than The W.

Pieschel said, “When Dean Amanda Powers described to me what our new archives were going to be like at The W, I knew where the papers should go. I am so happy that now they will be digitized and available for research by students and scholars everywhere.”

This first batch of letters had been made available online due in large part to the work of students in LIB 201: Intro to Digital Studies as well as archival student workers. Together, these students have worked on all aspects of the digitization project, from scanning to data entry to uploading the letters.

The letters can be viewed by visiting the Athena Commons Institutional Repositories at: https://athenacommons.muw.edu/smithpapers/

FOR IMMEDIATE RELEASE
April 7, 2021
Contact: Tyler Wheat
(662) 241-7683
This email address is being protected from spambots. You need JavaScript enabled to view it.