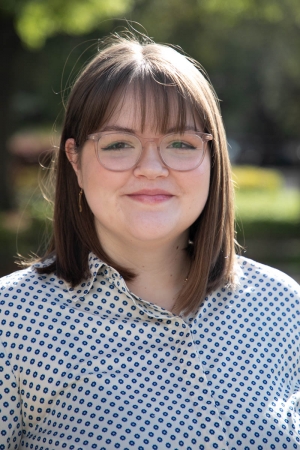 COLUMBUS, Miss.-- Olivia Smith, a music therapy student at Mississippi University for Women, won first place in the Upper College Musical Theatre division at the statewide competition held by the Mississippi chapter of the National Association of Teachers of Singing (NATS).

“I feel so honored to have placed first in my category at NATS. I am grateful to have had the opportunity to perform for an esteemed panel of judges among such a talented group of college musicians from all over the state,” said Smith. “This opportunity has been such a rewarding way to wrap up my final semester. I have Dr. Hurley to thank for not only pushing me to compete at NATS, but also for supporting and challenging me as a singer.”

The competition was held virtually during March and consisted of a preliminary and final round. Students submitted video recordings of their performances, which were adjudicated during each round by a panel of voice teachers from across Mississippi. A list of finalists was posted to the NATS website on Saturday, March 20th, and winners were announced live on Zoom later that afternoon. First place winners’ videos were played in a showcase during the event where they were viewed by NATS members and participating students.

Smith, of Clinton, submitted video performances of four contrasting selections from musical theatre, which included songs ranging from the “Golden Age” of Broadway to songs in contemporary style from recent musicals. Her featured performance at the winners’ showcase was the song “Christmas Lullaby” by Jason Robert Brown from “Songs for a New World.”

Smith is a voice student of Dr. Susan Hurley, assistant professor of voice at The W, with whom she has studied for the past three years.

Smith said, “This win gave me a much-needed boost of confidence as I prepare to leave The W and enter the professional world. It feels great to receive this recognition after three years of hard work with Dr. Hurley to hone my skills as a singer and performer. I am incredibly grateful!”