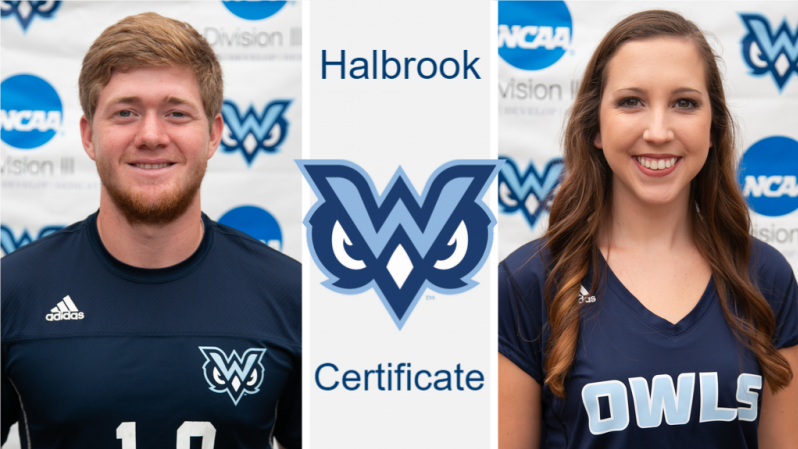 COLUMBUS, Miss. – Former Owls student-athletes Jacob Thomas and Haley McMurphey received The David M. Halbrook Certificate for Academic Achievement Among Athletes from the Mississippi Association of Colleges and Universities (MAC) for their academic achievements as student-athletes at The W. The honor recognizes the efforts of individual student-athletes who excel in academics, leadership and service. Each year, a male and female student-athlete from every Mississippi public, private, two-year and four-year postsecondary institution is recognized.

Joining the Owls men’s soccer team during its inaugural season in 2017 while also playing for the Owls men’s tennis team, Thomas graduated from The W in May of 2020 with a bachelor of Business Administration degree. The Brandon native, maintained a 3.8 GPA, was honored by the USCAA on its annual All-Academic Men’s Soccer Team and was named to the athletic director’s list honors semester after semester.

McMurphey, an Owls volleyball player from 2017-2020, graduated from The W in May of 2020 with a bachelor of science in Elementary Education with a 4.0 GPA. As an Owl, the USCAA recognized McMurphey as a member of its Volleyball All-Academic List 2017-2019, and The W recognized her on the athletic director’s List every semester.

“It is an honor to receive this award,” McMurphey told Owls Communication. “I am so blessed to represent the Mississippi University for Women and the volleyball team. I put a lot of time and effort into my academics and athletics, so this recognition means so much to me.”

The Caledonia native is currently a third-grade teacher at Henderson Wart Stewart in Starkville so education and academics mean a lot to her as an educator and was a significant part of her athletic career. “Academics are so important to the life of a student-athlete because they teach you discipline and responsibility. These qualities can take you so far in athletes, as well as life.”

McMurphey is continuing her educational pursuits and looks to receive a master’s in gifted education. For her former teammates and other Owls student-athletes, she leaves this advice, “Constantly think about the life you want outside of athletics. That doesn’t mean push your practices and games to the side, but always keep in the back of your mind what you want your future to look like. I always reminded myself that there is more to life than being a college athlete. This helped me focus on my academics, but also prioritize my practices and games; I could pursue the life I wanted when I was done playing volleyball.”

The Halbrook Awards, endowed by former Mississippi Representative David Halbrook Sr. and his brothers in honor of their parents, include The David M. Halbrook Certificate, The John C. and Ernestine McCall Halbrook Improvement Award, and The David M. Halbrook Trophy Awards are usually presented during the annual MAC Conferences. Due to covid-19 restrictions, the University of Mississippi Chancellor Dr. Glenn Boyce, who served as the 2019-2020 president of the MAC Board of Directors, presented the awards virtually during the December MAC business meeting.