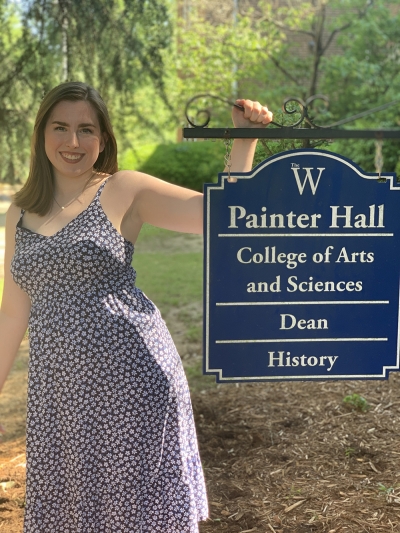 Harmon glimpsed only a fraction of the never-ending avenues of exploration in her four years as a history major at Mississippi University for Women. During that time, the Brandon native traced patterns and connected events that had major impacts on humanity.

In the past year, Harmon’s history capstone allowed her to learn and to research about those patterns and connections. Recently, the paper for her Capstone, “The Forgotten Gender of Crime: Female Criminals in Lowndes County, Mississippi, 1900-1920,” received the Best Paper Award for the Mississippi Phi Alpha Theta Conference.

The final product, which Harmon wrote under the direction of Dr. Kristi DiClemente, an assistant professor at The W, came in at more than 6,000 words, which was the longest paper she wrote as a college student.

“I was terrified,” said Harmon, who received her bachelor’s degree in May. “I thought I could never finish it. The research process was very interesting and fun; however, putting ideas together and actually writing the paper – that’s another story.”

Harmon started the research for the paper in April 2019. She was completing hours for her Junior Honors Seminar at the Columbus-Lowndes Public Library and helping Mona Vance-Ali, the archivist at the library’s Billups Garth Archives, write Facebook posts about certain pieces in their collections. Harmon said she wrote about many interesting topics, including a piece on the Lowndes County Circuit Court case of Dunstan Banks. Vance-Ali told her the Circuit Court cases were unexplored, which sparked her interest.

Harmon hadn’t decided on a topic for her Capstone and was intrigued. The thought of using unexplored primary resources sounded amazing. She chose the time period of 1900-1920 because she loves turn of the century history.

Harmon said her thesis statement changed multiple times throughout the project as she read more secondary sources. Her goal was to piece together the cases of violent criminal women in Lowndes County, Mississippi, into the larger story of research and criminal cases described by others. In the end, she found that these cases fit the pattern of female violence scholars had noted in Jamaica, Imperial Russia, Australia, Colonial Zimbabwe and Kansas City, Kansas. Harmon hopes her research expanded the narrative of feminist criminology by comparing violent, criminal women to one another, developing common characteristics of these women and highlighting how women were expected to act in that period.

“Women became the central topic because of their lack of cases, and violent cases were chosen because they are more interesting than petty crime because violent crime seriously transgresses gender norms for the women at the time,” said Harmon, who turned in her 25-page paper in December 2019.

Harmon, who also was president of the MUW History Society, vice president of Phi Kappa Phi and secretary of the Honors Council, admits she forgot she submitted the paper for the Phi Alpha Theta Conference in part due to the upheaval due to COVID-19. She was sitting at her dining room table completing job applications when she learned she received the award.

Dr. Erin Kempker, who served as Harmon’s adviser at The W, encouraged Harmon to submit the paper to the Phi Alpha Theta Conference. She said Harmon “idealizes the kind of enthusiasm and love of history we prize.”

“She has a wonderful future ahead in editing or as an archivist, museum curator or other public history professional,” Kempker said.

Harmon plans to attend graduate school, but she currently is focused on applying for jobs. While she does that, she will continue to explore the possibilities and to connect the threads of history.

“Writing the paper helped shape my skills as a researcher and a writer,” Harmon said. “Winning this award gave me confidence in my capabilities as I apply for jobs.”

FOR IMMEDIATE RELEASE
June 1, 2020
Contact: Adam Minichino
This email address is being protected from spambots. You need JavaScript enabled to view it.
(662) 329-1976