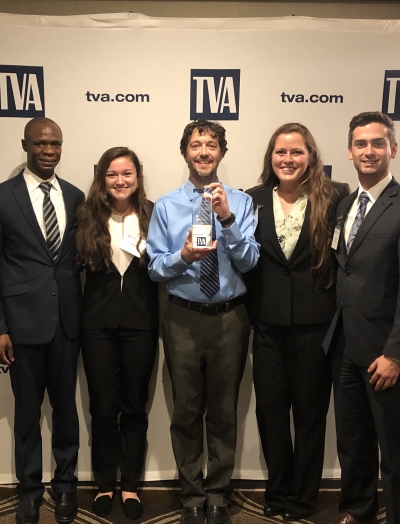 COLUMBUS, Miss. -- Patience is part of a successful investment strategy.

Hallie Cole and Josiah Shikhule have learned that skill in their three and four years as part of the Mississippi University for Women’s Tennessee Valley Authority (TVA) Club team that competes in the TVA Investment Challenge.

In their time together, Cole, the club president, and Shikhule, the vice president, also have learned how commitment and perseverance play important roles in successful investing.

Neither student imagined, though, they would be part of managing more than a half a million dollars.

“I think we feel a little pressure but not a lot because TVA is so kind and they just want us to do whatever approach and strategy that we think (will work),” Cole said. “If it works out, great. If it doesn’t, well, … but the guidelines they have in place help us not to completely fail.”

The W’s team used a combination of patience, perseverance and commitment in the 2018 investment year to finish first in the annual competition. The title is The W’s third (2000, 2011) in the 20 years of the competition.

In addition to beating the Standard & Poor’s 500 Index (S&P), The W team also posted positive returns overall. It was one of two teams to accomplish the feat.

The team, which includes Britain Welzien, a senior from Ridgeland; Sam Harvey, a junior from Columbus; and Dr. Andrew Luccasen, professor of economics and finance in The W’s College of Business and Professional Studies and club adviser, were honored April 8-9 in Nashville, Tennessee.

“It is like our baby, pretty much,” said Cole, a junior accounting major from Winfield, Alabama. “We do have the advantage of staying with it. Some schools are not classes and they get to stay with it as well, so that is important to note, but a lot of classes just cycle through the students.”

In 1998, TVA created the Investment Challenge by allocating $1.9 million to 19 universities to manage in investment portfolios. TVA added six schools to the program in 2003 and increased the portfolio amount to $10 million. A TVA asset retirement trust fund provided the original $1.9 million for the program and the additional $8 million to expand it.

Students manage TVA funds by designing long-term investment strategies, placing trades and providing performance reports to TVA. Investment guidelines are similar to those used by TVA’s professional investment managers. Universities can earn performance awards based on their returns versus the benchmark S&P 500 index.

Ben Duby, senior program manager for TVA Corporate investments, said the market experienced a lot of volatility in 2018. He said some active professional equity investment managers struggled to beat the S&P 500 last year, much less produce a positive return, but he said The W’s team was able to do both -- outperform the S&P 500 by 511 Basis point, or BPS, and generate a positive return.

“This was quite an accomplishment and speaks volumes to the diversification benefits of this program as MUW does not have a finance major and there are only three finance course offered at the university,” Duby said. “Most club members have not had a course in finance, but this program provides a unique opportunity for all students at the university that have an interest in investing to get involved and bring their different skill sets to the portfolio.

Duby said The W’s team had a Final Assets under Management (AUM) of $502,303 for the 2018 investment year. He also said The W teams have earned more than $50,000 in performance awards for the school in the life of the program.

Luccasen, who has been the club’s advisor since 2011, said the students decide what companies they want to invest in. Luccasen said he executes the buying and selling of stocks.

“We have done well, and we always want to do well,” he said. “We have confidence in our investing philosophy and the decisions we make. … It wasn’t a complete surprise (that the club finished first). We had hopes we would do well, but it is something we strive for.”

Luccasen said the goal for each club is to earn a higher return than the S&P 500. He said anyone can invest in an index fund to earn this market average. For example, suppose a club earned a 5 percent gain. While that might seem good at first glance, an 8 percent average gain by the S&P 500 would mean the club did 3 percent worse than the market average. Luccasen said The W Investment Club not only lost less than others but it also posted a small gain in a year that saw substantial losses.

“I am very proud of our team's performance this year,” he said.

Luccasen said The W’s club team’s portfolio has grown to a little more than $500,000 in the time it has competed in the challenge. For the investment year of 2018, Luccasen said he suggested a more conservative investment strategy. He said that thinking was echoed by a professional investor at a regional TVA conference in November 2018 that club members attended. As a result, the club’s total of $524,000 to start the investment year of 2018 remained “about the same,” according to Luccasen, to help it secure first place. Luccasen said the percent change in the portfolio’s value determines the finish of the teams.

Cole became involved in the club as a freshman after learning about it from Karley Watts, who was a president of the club as a senior. Watts also was Cole’s “big sister” in a social club on campus. Cole, who also is a part of The W’s Residential Honors Program, became president of The W’s TVA Investment Club in her sophomore year. She said the club didn’t make a big change in altering its investment strategy for 2018. Instead, Cole and Shikhule said the decision was a logical move due to the low unemployment, high stock prices, a high Price-to-Earnings Ratio (P/E) that pointed toward a recession or “bad times,” as Shikhule said, coming. The P/E Ratio measures a company’s current share price relative to its per-share earnings.

Shikhule, a senior accounting major who will graduate in May, said the choice to buy and hold stocks didn’t put a lot of pressure on the club, but he said it forced club members to research the companies they were considering investing in to make sure they fit the club’s goals.

Shikhule hopes to put the things he learned in the club to use in his next step. He would like to do an internship and then pursue a master’s degree in accounting or finance, possibly at Vanderbilt, the University of Mississippi or the University of Memphis.

“Dr. Luccasen encourages us because you may not even get into the finance career, but whatever career you get into you have to save for your retirement,” Shikhule said. “If you’re going to manage your 401K (a retirement savings account), you’re not going to be selling stocks every day, but you’re going to be doing the same thing we’re doing. We’re trying to find the best stock, invest in it, it grows and maybe after 10 years you’re going to have increased your portfolio. At least we have the skills to save for retirement and to manage your money and to grow it by the time you retire.”

“It’s always wise to invest with companies with low debt,” Luccasen said. “During economic expansion, if your venues are growing and your sales are growing, it’s more profitable for a company to finance a lot of that growth with debt. Our club came to the consensus that we seem to be near the peak of the business cycle. Unemployment doesn’t seem like it is going to go much lower. For a variety of other reasons, it seems like we are at peak.”

Luccasen said the club was looking for companies with debt during the economic expansion. He said the club believes the next recession will happen sooner rather than later, which explains the switch in philosophy.

Luccasen said the fact that The W doesn’t have a finance major, which means students don’t delve as deeply into financial statements to do the type of analysis that students at other schools do and makes the club’s accomplishments that much more impressive. He, too, hopes the first-place finish raises the club’s profile.

Luccasen said the club, which is free to join and is open to freshmen to juniors regardless of whether they have taken a finance course, offers students a great chance to manage real money and to prepare for their futures. He said the club typically meets twice a month on campus. He encourages any interested students to email him at This email address is being protected from spambots. You need JavaScript enabled to view it..

“All of us are going to be responsible for our own retirement savings,” Luccasen said. “All of us need to know what decisions we need to make. A lot of people delegate their financial decisions to someone else. You might be getting advice from someone who is not working in your best interests, so it gives them some experience and confidence to manage their own retirements savings.”

The TVA Investment Challenge involves schools in the TVA service region, which includes Tennessee, Mississippi, and parts of Alabama, Kentucky and North Carolina.

FOR IMMEDIATE RELEASE
April 23, 2019
Contact: Adam Minichino
This email address is being protected from spambots. You need JavaScript enabled to view it.
(662) 329-1976