Hagey’s passion for geckos, science opens doors at The W 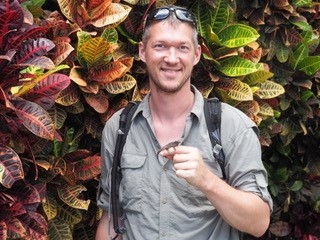 Be honest, if you were forced to identify a scientist would you think of Christopher Lloyd’s character Emmett “Doc” Brown in the “Back to the Future” movies, or would Bill Nye, who earned the nickname “the Science Guy,” pop into your head?

Hagey, an assistant professor of science at Mississippi University of Women, doesn’t fit into either category, even though he has the infectious nature of Lloyd’s “Doc” Brown.

Hagey’s passion shines through when he talks about his research about gecko toe pads; herpetology, a branch of zoology concerned with the study of amphibians and reptiles; and the relationship between science and philosophy.

“I was a kid when the first ‘Jurassic Park’ movie came out,” said Hagey, whose mother is a pre-school teacher and his father was a welder. “I think I saw that three times in the theater, but I was already super, super into dinosaurs. I wanted to be a paleontologist (a scientist who studies fossils). I had my favorite dinosaur. I knew all of their names, so in grade school I was the ‘dinosaur kid.’ I was the one keeping frogs in jars and that kind of stuff.”

Hagey, 35, grew up in the state of Washington loving animals and Legos, a brand of plastic blocks that can be locker together. He showcases his love for those two things and his enthusiasm for science when he teaches at The W.

The campus will have an opportunity to learn from Hagey Thursday, Feb. 28, when he takes part in the spring Forum Series hosted by The W’s Ina E. Gordy Honors College. Hagey will discuss his work on the biomechanics, evolution, and ecology of geckos, with special attention to their adhesive toes, and more generally how animal performance works and why animals are built the way they are. He also will discuss his science education outreach to K-12 students, museums and the general public.

The Gordy Honors College presents the Forum Series each semester. It features national, regional and local speakers and offers films and other special presentations. All university faculty and students are invited, and all events are free and open to the public. All events begin at 6 p.m. and are held in Nissan Auditorium on The W campus.

Hagey has published numerous studies of gecko species and animal performance and was a Science Communication Postdoctoral Fellow at the BEACON Center for the Study of Evolution in Action at Michigan State University before coming to The W in 2018.

“Dr. Hagey hit the ground running,” said Dr. Bonnie Oppenheimer, the department chair and a professor in The W’s College of Arts, Sciences & Math. “He has been applying for grants, getting grant funding. He has started to work with area teachers and he set up a lab to do undergraduate work with our students. We’re pleased with the effort Dr. Hagey has put in and pleased with what he is doing at The W.”

This semester, Hagey’s research involves lab work that is examining Repeated Convergent Evolution and the Generation of Biodiversity. A proposal that was approved last semester secured $2,000 for two undergraduates. A third student secured funding through local MUW grants. Hagey said he hopes the students will be able to participate in seminars in the spring at The W and to attend conferences in the summer to present their findings prior to producing papers.

Oppenheimer said Hagey’s decision to set up a lab on campus benefits his undergraduate students because most professors at The W do a lot of their research in the summer, and they may go somewhere else to do it.
Early exposure

Hagey said he enjoyed holding the flashlight when his father used to change the oil on his “muscle cars,” so he was exposed to mechanics at an early age. Those early lessons coupled with a love for biology he said was always present helped guide his start.

His path turned when he was a senior at Western Washington University in Bellingham, Wash. He said he took a field course with Dr. Roger Anderson that involved a three-week camping trip to the southeastern Oregon desert to study lizard field ecology. Haley said the experience helped set him up to go to graduate school. He said he spent part of the first two years trying to figure out what he wanted to do and where he wanted to go. It wasn’t until his advisor, Luke Harmon, who did a lot of computational work about geckos, recommended he study the biomechanics of gecko toe pads that he found his inspiration. Hagey started those studies in his second year of graduate school in 2008-09.

“It totally made sense because it is a mechanical system,” Hagey said when asked if he thought Harmon had discovered the right path for him.

You can tell it makes sense because Hagey can explain the science behind why a gecko is able to stick to surfaces in a few minutes. He avoids using dry language or complex formulations. Instead, his delivery includes visual aids and relatable examples lay people can understand.

Most importantly, Hagey conveys his knowledge with energy that draws you in. It’s the same excitement he shares with the three graduate students who are helping him with his research and grade-schoolers and high school students he interacts with through Skype a Scientist (www.skypeascientist.com), which partners elementary and high school classes with scientists. Skype allows scientists to connect with classes for 30- to 60-minute question-and-answer sessions that can cover the scientist’s expertise or what it’s like to be a scientist. The goal is to give students the opportunity to get to know a “real scientist.” There are more than 2,000 scientists ready to chat, and teachers can choose their scientist.

Earlier this month, Hagey said he took an hour to Skype with a second-grade class from Krisle Elementary School in Springfield, Tenn. This is the third semester Hagey has been involved with Skype a Scientist. In the spring of 2018, he interacted with an eighth-grade class in Ottawa, Canada, and a first-grade class in Virginia. In the fall of 2018, he connected with fifth-graders in Massachusetts, first-, second-, and third-graders in New Hampshire, 12th-graders in New York and seventh-graders in Minnesota. He said he has been matched with four more schools, so he hopes to have a few more meetings this semester.

“I feel like that is a really rewarding program and I don’t have to do any of the work,” Hagey said. “I just Skype with kids every once in a while, so it is super easy.”

In the spring of 2018, prior to coming to The W, Hagey said he also ran the Darwin Day Roadshow, which brought scientists in-person to visit K-12 classrooms. As part of that program, he visited and brought local scientists to 6th-12th graders in five schools in Michigan, to 11th- and 12th-graders in Texas, to seventh-graders in Florida and to ninth-graders in California.

“I try to find common ground and be up front and be transparent,” Hagey said. “I try to make a clear separation between opinion and fact. (I tell the students) this is where our class is going to live. We’re going to live with what is the definition of science and what is the definition of philosophy? Philosophy is a big umbrella that has spirituality, faith, religion, ethics, morality and talk about which things go in which categories. I have had success so far in the one and a half semesters I have been here. If you set up that foundation and then you say, ‘These are the walls. We’re going to live here and respectfully talk about both groups, I haven’t had any push back.’”

Hagey said he is trying to do as much as he can as fast as possible, which could help explain why he doesn’t seem to lose steam during a 45-minute conversation. He said he prefers to continue to do research rather than shifting to the applied side of science. Besides, he is already tweaking some of the things he did in his first semester as a professor at The W. He said he has been encouraged by the response from students in the first semester and a half. His goal is to continue to be a scientist who draws more and more students in rather than one who comes across as someone who has all of the answers.

That sounds like an approach “Doc” Brown would approve of.

“I hope I am not the only representative of what a scientist can look like,” Hagey said. “I try to show students in my classes and with my research that anybody can grow up to be a scientist. I have three undergraduates doing research with me this semester. All three of them are women, two grew up here in Mississippi and one is from Nepal. All three of these women are working on awesome projects and have plans to go to graduate school to get their PhDs.

“In the classes I teach, I also have students read about research that was been done by women and have them interact with female scientists at other universities using Skype. This again helps show students that scientists are real people like them that come from a ton of different backgrounds. Scientists don’t have to look like me. That, I think, is the most important point I want to make."

FOR IMMEDIATE RELEASE
Feb. 25, 2019
Contact: Adam Minichino
(662) 329-1976
This email address is being protected from spambots. You need JavaScript enabled to view it.