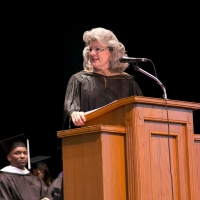 COLUMBUS, Miss. – Robin Robinson, a member of the state Board of Trustees, Institutions of Higher Learning, shared the VIP Principle of  success with approximately 100 graduates today at Mississippi University for Women’s first-ever December commencement ceremony.

“This principle has three key ingredients--that if practiced to perfection, will spell success --whatever your definition of success might be,” she said. “Those key ingredients are vision, involvement and persistence.”

Robinson said creating a vision allows individuals to make those seeds of greatness grow and blossom.

Using her personal experiences as an example, Robinson cited an example of graduation from college in 1978 and beginning her career with Laurel-based Sanderson Farms.

“I had decided by 1984 that I wanted to be the director of organization development and serve on the executive committee. Well, I worked hard to make my vision a reality. In 1986, I was named chief internal auditor; in 1995, human resources manager; and finally in 2000, my vision became a reality. I was named director of organization development…It only took me 15 years to get to my dream job,” she told graduates.

The second part of the VIP Principle was involvement. “Once you have your vision, you must become totally involved to the point of making your vision a reality,” Robinson said.

The third part of the VIP Principle was persistence.

“Once you have your vision, your plan of action, you are involved to the point of commitment. You must be prepared to overcome any and all obstacles by having persistence,” she said.

She pointed to a quote by Calvin Coolidge, the 30th President of the United States: “Nothing in the world can take the place of persistence. Talent will not; Nothing is more common than unsuccessful men with talent. Genius will not; The world is full of educated derelicts. Persistence and determination alone are omnipotent.”

Robinson said the slogan “’Press On’ has solved and always will solve the problems of the human race.”

In closing, Robinson said, the VIP principle, if practiced to perfection, would spell success for those just finishing their degree. “Never, ever, ever, ever, give up!”

As part of the ceremony, MUW President Jim Borsig also awarded Medals of Excellence to five recipients.  Awarded since 1979, the Medal of Excellence is the university’s highest non-degree honor.

The awards were made in recognition of exemplary service to MUW following the disastrous 2002 F-3 tornado that struck campus, damaging many historic buildings and destroying others.

One of the recipients was former Sen. Trent Lott, a 2007 Medal of Excellence recipient, who provided invaluable assistance throughout the recovery process and ensured the scope of damages to the Art and Design Building were fully addressed.

Awards were also presented to the following:

Robert Latham, executive director of the Mississippi Emergency Management Agency, who not only led the state’s response, but who assisted MUW in documenting the scope of damages following his retirement from that role.

Paul Barlow, director of the Mississippi Bureau of Buildings (retired), who provided expertise, professional referrals and assistance in facilitating the recovery process.

The City of Columbus and Lowndes County, whose leaders worked hand-in-hand with university officials to coordinate local disaster response and provide direct assistance to campus even as they responded to needs in the larger community.

Columbus Air Force Base, a good community partner and among the first to provide assistance with more than 190 pairs of boots on the ground, as well as equipment such as dump trucks and front-end loaders to begin clean-up and recovery.

FOR IMMEDIATE RELEASE
Dec. 7, 2013
Contact: Anika Mitchell Perkins
(662) 329-7124
This email address is being protected from spambots. You need JavaScript enabled to view it.