The library is open to MUW and MSMS students, faculty, and staff via swipe card access, and to the public by appointment. Masks and social distancing are required. Contact-free curbside pickup of books is available upon request. The physical building will be closed for cleaning purposes on Fridays and Saturdays, but the 24hr lab will be open seven days a week. See our COVID Library Info guide for more information.

If walls could talk, there is no doubt that the ones at John Clayton Fant Memorial Library would have many stories to tell. Their latest story: growing pains thanks to a $6.2 million expansion currently under way. 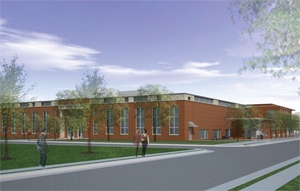 For the first time since 1969, when the library was built, the facility is undergoing a facelift. Phase I involves completely altering its appearance and constructing a shelled addition to Fant, which is expected to be complete around December 2013, according to Jody Kennedy, assistant director of facilities engineering.

“Next steps will involve a complete interior renovation of the original Fant Library, as well as the new addition, which will ultimately include a cyber café, classroom and meeting space, office space and high density book storage space,” Kennedy said.

The high density book storage space, also known as the Automated Storage and Retrieval System (ASRS), has been constructed on the southeast corner of the library site.

“This system consists of aisles of high-bay storage shelving, not unlike what one might see in a Home Depot with rails that run between the aisles,” Kennedy said. 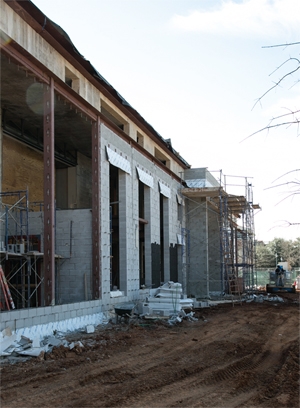 “Bins of books will be retrieved from the shelving robotically, delivered to a point of discharge and a patron will take the book from that point to check out.”

The library faculty and staff are excited about the renovation and addition. With almost 50 years combined service, both Gail Gunter, dean of libraries, and Cathy Young, assistant professor of library services, are especially excited about the ASRS.

“We will be the only library in Mississippi to have one,” said Young, noting they traveled to Valparaiso University in Indiana to see how their ASRS operates.

Gunter added, “We’ll have some services that we really don’t offer now,” including a smart classroom and community meeting rooms.

In order to prepare for the renovation, each wall of the library had to come forward 2 feet and certain parts of the library collection had to be moved to allow the contractor to access the exterior walls that feature new entrances.

While windows have been boarded up and the north entrance has been moved west, it is business as usual, according to Gunter and Young. “We are fully functional.”