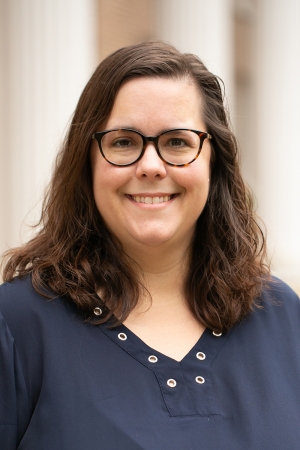 Don’t let all of the letters that follow her name these days fool you because Brock set out to be a lawyer after she graduated from Pascagoula High School.

That’s when Brock realized she didn’t want to be a lawyer.

“I had taken the LSAT (the Law School Admission Test) and had a pretty decent score and probably would not have had a problem getting into law school, but I just could not see myself doing it,” Brock said.

Brock said she spent a semester trying to figure out her next step. Brock’s love for computers paved the way for her to move into her new office as the Mississippi University for Women’s interim dean, professor of management information systems.

Brock doesn’t have a name plate on her desk to highlight the A.A., the B.A., the M.S.B.A. and the Ph.D. – the last three from MSU – she earned, but her background makes her an excellent resource for transfer students who are adjusting to a new school or a new field of study.

“I will have students who sometimes ask, ‘How did you get into this field,’ ” said Brock, who holds an M.S.B.A. in information systems and a Ph.D. in Instructional Systems and Workforce Development from MSU. “I tell them, ‘I kind of tried stuff and found what I liked.’ I probably am not the best planner in the world, but that was the path I took.”

Brock and The W are celebrating the National Institute for the Study of Transfer Students’ (NISTS) National Transfer Week, which is Oct. 21-25. The week is designed to celebrate transfer students and the professionals who support them on their journey.

In 2018, The W had 672 first-time transfer students (545 female, 127 male), including students from El Salvador, Chile and Croatia. The W also had transfers from Alabama, Arkansas, California, Connecticut, Florida, Georgia, Louisiana, Missouri, New Jersey, South Dakota, Tennessee, and Texas, as well as 69 counties in the state of Mississippi.

Brock’s versatility as a professional in a private company that sold computer training and in the MSU extension service computer department earned her a “jack-of-all-trades” reputation. She continues to serve in multiple roles at The W, and is someone who understands how quickly students can change gears and alter their plans.

“That history degree gave me a good foundation on how to research and how to write going into the master’s program,” said Brock, who took about five-and-a-half years to complete her A.A., her B.A. and her M.S.B.A. She said her Ph.D. took a little longer – eight-and-a-half years – because she had two children in that time span, was working full time and going to school part time. “That undergrad degree actually put me a little ahead when I went ahead to do the Ph.D. because so much of that is research based.”

Brock’s journey shows someone’s initial final destination can morph into an entirely different occupation. She said the education at MGCCC was “top notch” and gave her an excellent foundation upon which to build. She said her ability to write, to do math and to understand history allowed her to transition into that major. The sizes of the classes at MGCCC helped her feel more comfortable and enabled her to work and stay at home. As a result, she was able to save money and “spread her wings” in a number of activities, including the J.C. Singers, a small group choir and Phi Theta Kappa, the world’s largest and most prestigious honor society for two-year college students.

The “soft transition” she experienced in moving from high school to MGCCC proved to be invaluable. She feels The W tries to provide a similar atmosphere and framework so transfer students can adjust easily to their new home.

“One of the things we have done, within the College of Business and Professional Studies especially, is we have built transfer pathways to show a student from day one what the path would be if they came to The W,” Brock said. “The pathways show students what classes would transfer, what you would need to be on track. The goal was two-fold. We wanted the students to be fully informed on day one. We also wanted to minimize transfer credit loss. A lot of that work has been to make sure the students come in and meet the requirements for the four-year institution so they don’t lose time and money.

“We have worked closely with our counterparts at the community colleges to make sure that what is needed here is in line with what they need to graduate there.”