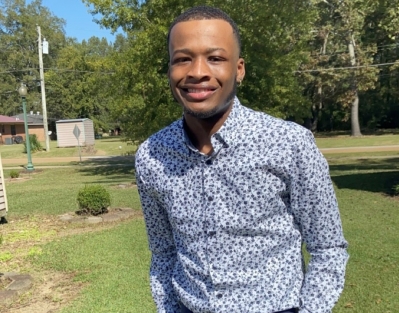 COLUMBUS, Miss. -- Kennie Hicks doesn’t look at his schedule and feel he is “busy.”

Instead, the senior family science major at Mississippi University for Women feels a packed slate keeps him engaged. Whether it is his schoolwork, his part-time job at Walmart or his participation in the Army Reserves, Hicks considers everything he does an opportunity to learn.

Earlier this year, Hicks took advantage of a chance to prepare for his future work with autistic children when he took part in the Mississippi State University Extension Service’s Undergraduate Apprenticeship Program. The 10-week program, which was extended by two weeks, enabled Hicks to conduct research on the competencies relative to Mississippi Extension Family and Consumer Sciences educators.

“Research has always been a weak area for me, and it has never really been something I wanted to pursue,” said Hicks, who is from West Point. “After the apprenticeship, I feel more comfortable about research and my mentors gave me a high praise about my work. The apprenticeship also enabled me to practice my professional conduct and my interactions with professionals in the career field.”

Hicks credited Dr. Marina D’Abreau Denny and Dr. Alisha Marie Hardman for helping him to realize it doesn’t matter how long you have been working in a field and that there’s no such thing as not being able to learn. He will implement those lessons as he completes CAST (Child Advocacy Studies Training) courses in The W’s Psychology and Family Science Department and moves closer to graduation in April 2021. Hicks then plans to pursue his doctorate in applied behavioral analysis from the University of Mississippi.

Hicks said the apprenticeship program helped him because it exposed him to the value of being versatile in multiple disciplines. He said his research project included developing and disseminating surveys for four knowledge areas -- consumer economics, human development, health and safety and nutrition and food safety – in the family and consumer sciences competency framework. He said he only had time to analyze the results from the human development survey.

“The apprenticeship helped me realize specializing in one area can be detrimental when working in this field, or anything similar to this field,” Hicks said. “It helped me come up with a goal to at least know the general knowledge for multiple aspects that fall under the umbrella of family and consumer science so I can continue to be a true help to the families and children in need.”

Dr. Dorothy Berglund, a professor in and the chair of The W’s Department of Psychology and Family Science, praised Hicks for his ability to juggle his studies, his time in the Army Reserves and his job at Walmart in West Point. She said Hicks, who is taking the CAST certification, also seems to have a knack for child protection work.

“Kennie amazes me,” Berglund said. “He is one of the busiest people, student or otherwise I know.”

Marina Denny, director of the MSU Extension Service’s Undergraduate Apprenticeship Program, said COVID-19 forced Hicks’ experience with the project to be restructured. She said he developed online instruments to solicit information from FCS content experts and to qualitatively analyze that data to establish official definitions and baseline criteria for future research. Denny said Hicks’ work contributed to a much larger, ongoing research effort to understand and design competency-based professional development for current and future Cooperative Extension educators in the state of Mississippi.

“I’m pretty sure Kennie was getting his best work done when we were asleep,” said Denny, who also is an assistant professor in MSU’s School of Human Sciences. “He was a pleasure to work with, and we are confident he will succeed in graduate school and beyond. Additionally, we were proud Kennie developed a poster of his project and presented it virtually at the MSU Undergraduate Research Symposium in October.

“Despite all these hiccups, Kennie maintained an infectious level of enthusiasm, positivity and “go-with-it-ness,” which we appreciated tremendously. He demonstrated initiative in reading, investigating and answering questions on his own before coming to us for assistance. He also exhibited a strong work ethic, despite the apprenticeship being 100% online and remote.”

Hicks will stay busy through May 2021, when he will be deployed to Kuwait as a member of the Human Resources unit. He swore into the Army Reserves when he was a senior in high school. The deployment will last three to nine months.

Until then, Hicks will continue to expand his horizons. He said he wanted to take courses for CAST certification even though they weren’t in his current plans. Hicks hopes to work with children with special needs so he knows being able to tell signs of maltreatment, neglect and/or abuse is crucial.

Hicks said his time at The W has taught him to value inclusivity. He said Berglund, Dr. Holleen Krogh, Dr. Youn Mi Lee and several other professors in The W’s Department of Psychology and Family Science have kept him curious and motivated.

“Working with such compassionate professionals will help me to do the same when I have subordinates under me,” Hicks said. “I will be knowledgeable in my career field, but I also will know how to empathize with the people I work with. That is probably the best thing I could’ve asked for in the development of the start of my professional career.”

FOR IMMEDIATE RELEASE
Dec. 8, 2020
Contact: Adam Minichino
This email address is being protected from spambots. You need JavaScript enabled to view it.
(662) 329-1976