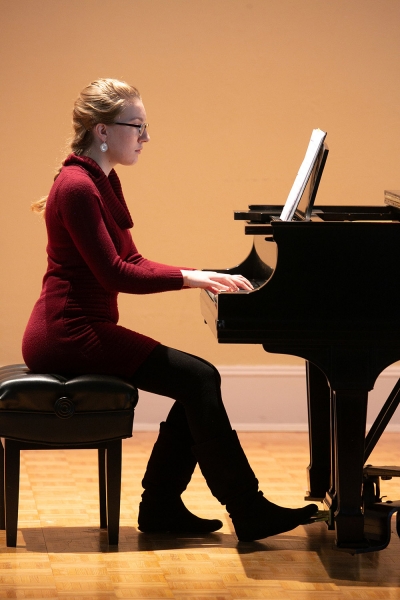 Hannah didn’t know much about melody or minor or major progressions, but something about watching a clip of Beethoven’s “Fur Elise” on YouTube clicked with her. That video served as Hannah’s introduction to the piano and was the day she officially became a “pest.”

“I didn’t stop bugging my mom and dad about starting lessons after watching that video,” said Hannah, who is now a senior at Mississippi University for Women.

“Ever since I can remember, I have loved music,” Hannah said. “It is my way of expression, of worship and of commitment. Music is my whole life.”

Hannah said it took her almost a year to complete “Theme and Variations: Emotions,” which focuses on her raw emotions, particularly vanity. She said she usually incorporates her life experiences and emotions in her work and faced the challenge of sticking to her main theme instead of coming up with new material.

Hannah said she concentrated on vanity because it is a hopelessness of how you can feel nothing matters. She said each variation – ignorance, affliction, suspense, adjustment, epiphany and redemption -- in the piece describes the range of emotions that stem from vanity.

“I had a lot of new material I had to take out because it didn’t fit,” Hannah said. “I would listen to and play my theme and think about its harmonic progression. I also used the emotion I was going for to help me give a placement of mood.”

Hannah said she composes two to four works a year and that she loves performing her piano works almost as much as she enjoys composing them. She feels like the composing stage is what she uses to express an inner turmoil or happiness, and the performing aspect is where she can share that experience with everyone.

Hannah credits her professors at The W for inspiring her growth as a musician. She said Mortyakova, Bogdan and Alexander have been influential in pushing her to be better and seeing more potential in her as a musician than she ever saw in herself.

“I am so thankful to them for helping me realize what I can accomplish in music,” Hannah said.

Mortyakova said The W’s Music Department is proud of the accomplishments Hannah has achieved in a short time.

“Hannah is a wonderful representative of our entire department and a joy to teach,” said Mortyakova, who is a professor and the chair of the Department of Music.

Alexander said Hannah, who is a three-time winner of the Mississippi Music Teachers National Association’s Young Artist Composer, is the only freshman composition student he has taught in his 30-plus years of teaching. He said she is a very hard worker who absorbs musical techniques quickly.

“Hannah Heaton Adhikari is the best composition student I have taught at The W,” Alexander said. “She has excelled at composing chamber music, songs, piano music and orchestral music. Sh’e will go far.

Hannah said she would like to continue teaching piano students, composing and performing her piano works, having her pieces be performed and learning new piano repertoire. She said her goal is to continue to challenge herself and to be better than she was yesterday. That doesn’t seem like it will be a problem for someone who wrote her first composition for solo piano, “The Lone Hills,” when she was 11.

“I never remember a time where I haven’t enjoyed playing,” Hannah said. “Practicing piano never was a chore, but a way I could escape into my own world. Composition came shortly after I began learning to play.”

FOR IMMEDIATE RELEASE
March 8, 2022
Contact: Adam Minichino
This email address is being protected from spambots. You need JavaScript enabled to view it.
(662) 329-1976