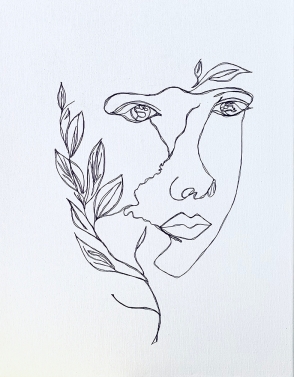 COLUMBUS, Miss.--D’Khiyah Matthews doesn’t have a lot of time to draw during the school year. 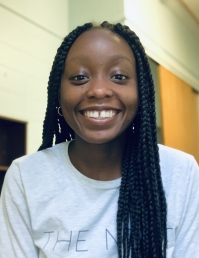 Ordinarily, Matthews, a senior music therapy major at Mississippi University for Women, uses semester breaks or time in the summer to showcase her creativity. But inspiration hits at unexpected occasions or comes from atypical sources, like a medical ethics class.

As a result, Matthews discovered inspirations from unusual sources can lead to surprising creations – and rewards.

Matthews turned that spark she felt from reading “Killing The Black Body” by Dorothy Roberts into the winning drawing in The W’s Department of Languages, Literature, & Philosophy inaugural creative contest.

Hannah Heaton (second), Helen Banes, Lydia Lowery and Giana Wilson (tied for third) and Susan Kelejian and Kyra Brown (tied for fourth) also were recognized in the contest that was developed by assistant professors of philosophy Dr. Jill Drouillard and Dr. Josh Dohmen. The contest was open to any student at The W.

Drouillard and Dohmen said the competition was intended to support the creative minds of students and to assist local businesses during the COVID-19 pandemic. Drouillard said students could use any creative medium (painting, sculpture, poetry, music, dance, drawing etc.) to tackle any philosophical topic (a particular philosopher, text or movement). The students then were asked to send their projects with a description of the philosophical topic that inspired their work.

“We were pleased with the outcome,” said Drouillard, who hopes to continue the contest next year. “We were able to spread the word about supporting local businesses and to reward the creativity and philosophical prowess of some talented students.”

Matthews, who is from Jackson, said her piece is a representation of women’s reproductive rights and the lack of complete autonomy women have over their bodies.

She learned about forced sterilization in women of color and the writings of Roberts, who is a social justice advocate, in her medical ethics class. She said Roberts’ statement that “the control of Black women’s reproduction has shaped the meaning of reproductive liberty in America” inspired a drawing that is centered around the outline of a woman’s uterus, which is an important organ in female reproduction, and plants as a symbol of life and growth.

Matthews said additional research and reading of Roberts’ book enhanced her understanding of how America’s history has played a role in dehumanizing women of color in their reproductive freedoms and how it is connected to reproductive liberty for all women. Matthews combined her findings with an idea to create some form of line art. She then sketched an outline in pencil on canvas and I went back and used a Sharpie to connect it. Matthews said the leaves in the drawing also represent life and growth.

“Due to this realization and my belief of women having autonomy over their body, I wanted to depict a piece that exemplifies women’s reproductive freedom,” said Matthews, who received $100 in gift cards for winning the contest. “This was my first time doing this type of piece, and I believe it turned out really well.” 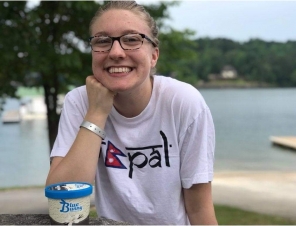 Heaton had a similar epiphany in her Introduction to Philosophy 101 class when she read “Playfulness, “World”-Travelling, and Loving Perception,” an essay by Maria Lugones.

Heaton, a music performance (piano) major, has been playing piano for around 12 years and is a regular composer for piano works. She said she was impressed when she read Lugones’ work and thought “this is how everyone should act.” Heaton admits she had never heard of Lugones, but she feels her thoughts are so inclusive that everyone should read the essay.

“Love is something of a commodity nowadays. I believe it to be the remedy for most issues in our society today,” said Heaton, who was awarded a $75 Gift Card to Three Sisters Pie Company. “Lugones says playfulness is the kind of attitude we should have when we travel to another’s ‘world’ to try our best to understand them. We should never see someone through a kind of fixed perception, but as an ever- changing being. We can never fully understand someone, or even ourselves, but we should change our perspective. We should not conform to a preconceived notion that we have set about someone.

“As a woman, I see Lugones’ idea of an arrogant perspective all around me. The white women see the black women as inferior, the black women see the Latinos as inferio, and so on. Too much inferiorism and not enough understanding and love. It doesn’t matter who we are as women. We are all uniquely created to be beautiful and to be ourselves. I would love to see more of Lugones’ ideas of a woman’s perception being spread throughout society. It starts with one and ends with many. To Love!”

Heaton said Lugones’ work connects with her because she has seen other people being treated poorly based on those standards. She said it breaks her heart to see people be so negative to one another based on differences or the inability to empathize, which is why Lugones’ work inspired her and fueled her desire to continue to show love to everyone she meets.

“A lot of the piece is going for a mood of understanding and love with a dash of fun,” said Heaton of her composition, “A Woman’s Perception,” which was intended for acoustic piano. “I was surprised and excited for all the pie I won. In all seriousness, though, I wasn’t expecting to place and was really excited. Dr. Drouillard sent me a personal message about the contest that encouraged me to enter, so I owe her a huge thanks.”

Awarded a $25 Gift Card to Zachary’s

Awarded a $25 Gift Card to Zachary’s

FOR IMMEDIATE RELEASE
Dec. 3, 2020
Contact: Adam Minichino
This email address is being protected from spambots. You need JavaScript enabled to view it.
(662) 329-1976