English professor to be recognized by Mississippi Humanities Council 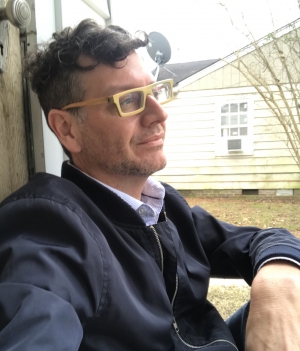 Now in his fourth year as an assistant professor of English/creative writing at Mississippi University for Women, Lee has enjoyed coming home to the state of Mississippi to build metaphors and mystery. In each case, Lee relies on his experiences to allow a personal approach to take root. He follows that thinking in his writing and in his work with undergraduate and graduate students in creative writing, drama, playwriting and American Literature.

“I am not terribly conventional about a lot of things,” Lee said. “In a lot of ways, yes, I think I fit that mold in which most people in the South are brought up to respect or honor or recognize about the South as a culture, but the South is also very complicated. I think I recognize that every day in the classroom and I try to embrace that because I love diversity and I love the many ways of looking at one thing and they’re all the right ways. However you look at the thing is the right way to look at the thing. If we all come to the table and talk about it, which is the way I conduct my classrooms, is the better way, I think, for the future of the South, and America.”

Lee’s unique style has helped his writing, which includes his first collection of poems, “To Square a Circle,” attract attention and has enabled him to have success in the classroom. On Friday, April 5, Lee’s work in bringing the insights of the humanities to public audiences was recognized at a reception at the Old Capitol Museum in Jackson. Presented annually by the Mississippi Humanities Council, Lee was The W’s honoree at an event in which humanities faculty members from Mississippi colleges and universities were recognized for their contributions in the state.

“I was shocked,” said Lee, who taught in Indiana and at Mississippi State and at East Mississippi Community College prior to coming to The W. “I know none of us do what we do because we want to be awarded, but I am not going to lie and pretend it doesn’t feel good to be respected or honored by your peers, and to know peers have to nominate you (for the award).

“I didn’t even know it was a thing. I didn’t really believe it at first, but I was honored. … It keeps me in check. It is a good perspective to have, and to have validation that this weird way that I have of teaching actually resonates.”

Lee was chosen by humanities faculty for his work in literature and theatre. As part of the award, Lee presented a lecture in February titled “The Elephant in the Room Wants a Cup of Coffee” that described his creative process.

Lee’s collection of poems “To Square a Circle” was published in October 2018 by Unsolicited Press. He also has written and produced several plays, including “Paper Thin,” which won Mississippi Theatre Association awards in 2018.

Lee, who was born in Charleston, South Carolina, grew up around Hattiesburg and in Louisville. He also has lived in Europe, New York and Washington, D.C., but he returned to the state of Mississippi shortly after earning his master of fine arts degree in creative writing from Spalding University in Louisville, Kentucky. Lee said he has enjoyed the last four-plus years at The W and continues to celebrate the diversity on campus. He remains excited about the energy he receives from his students.

In “To Square a Circle,” the South is Lee’s primary topic. When asked how he captures the feel, nuance or tone of a part of the country he has lived for most of his life so it isn’t forced, Lee said he tries to follow the words of Eudora

Welty, who wrote in the essay “Words into Fiction” that fiction is “a personal act of vision.” Lee said his “vision” comes primarily from experiences he has had and from people he has met. He said the people in his work are archetypes who possess the qualities he has observed and are designed not to satisfy or to offend anyone.

“I guess it develops over years, too, the way you learn to see and look at a thing and seeing a thing is not the same as looking at a thing,” Lee said. “If you keep it active and you keep it personal, you can follow that root out, it will always be less forced, but it is a unique way of seeing the same thing everybody looks at but not sees and looks at the same way.

“That is what I try to do. I don’t really have a writing process, per se. Progress is process, so if I am writing I am moving through.”

When it comes to teaching, Lee said he tries to show his students he cares about what he does and them to help them learn at a pace that is comfortable to them. He said he also tries to cast a wide net and to take a simple approach so students can keep all of their “doors” open and can learn in their way.

“I want them to have a voice, and so many times they don’t know how to find it because they think what they feel about a piece of literature isn’t right, but it isn’t that black and white,” Lee said. “It isn’t right or wrong, really. It is theoretical, for the most part, unless the author specifically tells you. … I just try to find where they are and keep them doing the thing they know to do and try to add to that.”

Dr. Kendall Dunkelberg, director of creative writing at The W and the chair of the Department of Languages, Literature, and Philosophy, said Lee “brings a dynamic new voice to Southern poetry” in his review of “To Square a Circle.” He said Lee has been a fixture on campus and in the area in promoting the humanities.

“Kris has been active in the local theatre scene, writing, directing and performing in plays for the Starkville Community Theatre, where he also serves on the board,” Dunkelberg said. “He came to The W in 2015 when we started our low-residency MFA program in creative writing, and has been a vital member of our department, teaching literature survey, creative writing and playwriting at the undergraduate level. Kris is a very energetic teacher who has a close relationship with the students in his classes. He was instrumental in starting the Emerging Voices series with the Theatre Department, featuring original scripts by students in our MFA and undergraduate playwriting classes. In his classes, through his work in the theatre and with his new collection of poetry, Kris actively promotes the humanities and was an obvious choice for this year’s Humanities Faculty Member of the Year.

Dr. Nora Corrigan, a professor of English at The W, echoed Dunkelberg’s thoughts and said Lee is a “very supportive professor and mentor” to his students.

“I have noticed this both while serving with him on Honors research committees, and just from observing his work with the playwriting students,” Corrigan said. “I’ve been particularly impressed with the amount of work he puts in with the theater department to make the staged readings of student-produced plays possible. Seeing their words brought to life by actors is an incredibly powerful, emotional experience for our student playwrights, which would not be possible without Kris’ energy and enthusiasm and the strong collaborations he has forged with our colleagues in theater.”

FOR IMMEDIATE RELEASE
April 5, 2019
Contact: Adam Minichino
This email address is being protected from spambots. You need JavaScript enabled to view it.
(662) 329-1976