Egyptian Mahmoud Ali on leadership path at The W 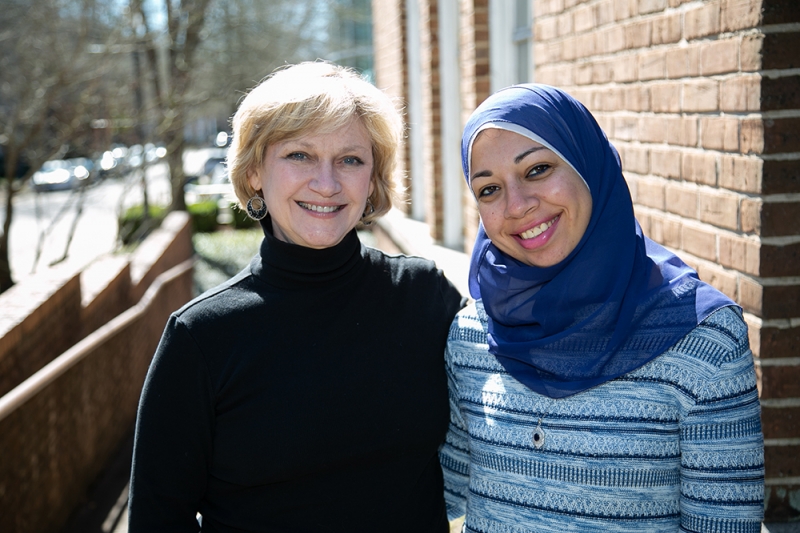 COLUMBUS, Miss. -- Bassant Mahmoud Ali pauses and ponders the question: Do you consider yourself a leader?

When Mahmoud Ali answers, she doesn’t sound 100 percent convinced. She says “she guesses” she is and that she typically is eager to take a responsibility and do what she can not to let that person down.

Mahmoud Ali’s graduate work at Mississippi University for Women has her on a path to changing the way she sees herself. In fact, it already has altered the thinking of the 33-year-old student from Cairo, Egypt, who is pursuing her master’s degree in Women’s Leadership thanks to a scholarship from the United States Agency for International Development in cooperation with Ministry of Education in Egypt.

“I can be (a leader),” Mahmoud Ali said. “If I am not a leader today, I think I can be a good one one day. Through my experience here and if I achieve my dream and work at an organization like an NGO, I think I can be one.”

Mahmoud Ali said she wants to give back and help people. She said she has been motivated to do that since she was a little girl. That generosity of spirt is why Mahmoud Ali has a dream to operate an NGO in Egypt or in another part of Africa. A NGO is a nonprofit organization that operates separately of any government, typically one whose purpose is to address a social or political issue.

That definition mirrors a lot of what Mahmoud Ali has learned since she arrived in Mississippi in August 2018. She said she had come to believe that “money is not everything” and that there are issues money can’t solve.

“If you don’t interfere and do something – try to change the mentality of the people – it is not going to change and nothing is going to happen,” Mahmoud Ali said. “I hope so (when asked if she thinks she is going to be someone who affects change). I would love to be that, to change something, to change a mentality, to help people to see how bad things are, especially the things in Africa and some places in Egypt.”

Mahmoud Ali lived all of her life in Egypt prior to coming to The W. She has two sisters, Dalia, and Rasha. She said her father, Mahmoud, supported her decision to study in the United States. She said her mother, Fatma, wasn’t sure she was serious about it and told her to “do whatever you want” until she discovered Mahmoud Ali was going to go through with it. Bassant also said her managers at her job at the National Statistical office in Cairo also encouraged her to study in the U.S. She said she is the third or the fourth student from that office to do graduate work in the United States.

She is the only member of her entire family who has studied outside of Egypt. Prior to coming to The W, she said she spent five years working as a representative in a call center. She also works as a translator and a coordinator. She said she is still employed by that organization.

Mahmoud Ali has been able to speak, read and write Arabic, Spanish and English since she received her bachelor’s degree in Spanish from Al-Alsun Faculty of Language in Cairo in 2007.

In March 2017, Mahmoud Ali started to investigate possible opportunities to study in the U.S. She said she had a personal interest in women’s studies and that she also wanted to study at a school where she could learn about international affairs.

That decision kicked off a journey that was part patience and part frustration. Mahmoud Ali said Dr. Bridget Pieschel, the director of the Center for Women’s Research and Public Policy and a professor of English at The W, was the only one to respond to her out of a batch of 10 emails.

Mahmoud Ali said she knew nothing about The W or the state of Mississippi when she sent her initial emails looking for a place to study. She said she also sent emails to Florida State, Michigan and others. She said FSU asked that she take another test prior to accepting her, but she declined to take the test.

That decision led Mahmoud Ali back to The W.

“When I knew its name was Mississippi University for Women I felt like women’s studies and its name – Mississippi School for Women -- this is probably the best place to know everything about women’s studies,” Mahmoud Ali said. “I enjoy studying here. I have learned a lot of things since I started studying.”

In fact, Mahmoud Ali smiles when she says she has already broadened her horizons and learned a lot about Egypt, women and statistics – and everything.

“When I came here I found out no, I don’t know anything, not as much as I thought I know,” Mahmoud Ali said.

Mahmoud Ali feels she has become more curious. That is one of the goals that Dr. Jim Borsig, The W’s former president, stressed. Nora Miller, the current president, is pushing The W to build on that thinking through themes of adaptability, positivity and responsibility.

Pieschel is helping to bridge that gap. She said the Center for Women’s Research and Public Policy is connected with the major in women’s studies and the master’s degree in women’s leadership. She said classes range from public health, to education, to business and marketing, to women in history. She said students take courses that examine the role of women in a lot of areas so they have a broad liberal arts degree that helps them understand where women are in the world as far as gender equality, pay equality, social equality in history and that the Center helps amplify those areas of study.

“She is a treasure,” Pieschel said. “We were extremely fortunate that Bassant literally dropped into our lap. There was no recruiting involved.”

Pieschel said she has been “amazed” at Mahmoud Ali’s independence and resiliency. She said Mahmoud Ali is a great example to students at The W “who have never been anywhere (in that) she is independent and she was not afraid to go somewhere else where nobody knew her and that was completely different from her cultural and her religious background.”

“She picked us,” Pieschel said. “She knew why she picked us. She knew what she wanted to do. She got here and never had an issues getting started and has done extremely well.

“She is an example of an open heart and mind. She is not afraid to say what she thinks in a very calm and diplomatic way.”

Mahmoud Ali said she had no idea what to expect when she arrived in Mississippi.

She said she thought life in the state would be similar to what she experienced in 2017 when she traveled to New York for her work in Egypt.

It didn’t take long for Mahmoud Ali to discover things were different.

“It was dark, so I didn’t know anything,” Mahmoud Ali said of when she arrived at the Golden Triangle Airport in Columbus. “I came in at 10 p.m., so I didn’t see anything. I figured out everything the next morning. Dr. Pieschel really made it easy for me. She helped me in the beginning, and she is still helping me.”

Mahmoud Ali admitted she did wonder what she had gotten herself into after she arrived. Part of her apprehension came from the fact she had lived all of her life in the same building with her family. She also said adjusting to so many new things without any friends or a familial support system was “overwhelming” at the beginning, but she said things have gotten a lot better.

It’s not surprising Mahmoud Ali has grown more comfortable at The W because she navigated through two years of uncertainty as she waited to be approved for her scholarship so she could come to the United States.

In 2017, she said she had an interview with the U.S. Aid agency, which is when she started to think she was going to receive the scholarship. Patience slowly turned to frustration, but she said she never lost hope she would get a shot to pursue her dream

Pieschel said Mahmoud Ali always has been ambitious and dedicated to advancing in her career. Little did she know she would discover the degree of Mahmoud Ali’s tenacity in the next two years. That’s how long it took for Mahmoud Ali to fill out all of the paperwork and to clear all of the legal hurdles to receive the scholarship to study in the United States.

“Now that she is here, it is the equivalent of having a complete cultural embassy in one person on campus,” Pieschel said. “She’s amazing in many ways, but one of the things about her is how easily she connects with other people. She is fearless. She is interested in everything.”

That curiosity and boldness has served Mahmoud Ali well. She also knows other people are learning from her.

“The more I know her the more interesting she becomes,” Pieschel said. “At the end of the semester, she will have another year, and I will be very interested to see what she decides to focus her thesis on. She still has so many ideas and things she is interested in. I look forward to being able to spend more quality academic time with her.”

Pieschel said she has talked with Mahmoud Ali about several possible areas of interest – comparing gender rights in Egypt and in Mississippi, or a study of characteristics of women leaders throughout the world she has interviewed.

“I think of her as someone who will be a public figure in her own country,” Pieschel said. “She is that confident and focused. Like I said, she dropped into our lap. We were fortunate; I had a sense of how important this was going to be for us, but I did not realize how significant of a person she was until she got here.”

Mahmoud Ali doesn’t know which road she will take. She feels she has grown more responsible and being by herself. The decision to leave friends and family forced her to leave her “comfort zone” and it has given her a better perspective how to help people and how she can affect change. After all, she has changed more than she ever imagined when she first considered studying in the United States. Now, the idea of change has branched out and has Mahmoud Ali thinking about how she can touch people all over the world.

“Before I came here, all I was thinking was I am going to get a degree and add it to my resume,” Mahmoud Ali said. “When I came here and started studies, it is not just about getting a degree. It is about learning things, learning to do things, learning how to change yourself. I think studying here has really changed my perspective and how I think about others.

FOR IMMEDIATE RELEASE
March 6, 2019
Contact: Adam Minichino
(662) 329-1976
This email address is being protected from spambots. You need JavaScript enabled to view it.