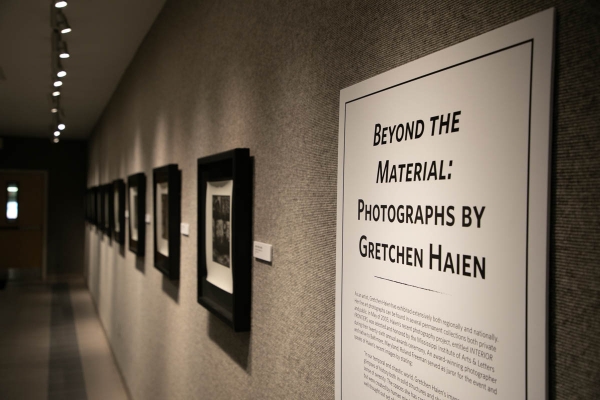 COLUMBUS, Miss.—“Beyond the Material,” an exhibition of two photography series by artist Gretchen Haien, will be on display at the MUW Galleries until April 23. Haien is a professor of art and gallery director at Belhaven University in Jackson and has exhibited regionally and nationally.

One of the series featured in the exhibition, entitled “Interior Frontiers,” was awarded the 2005 Mississippi Arts and Letters Award in Photography.

“In our temporal and chaotic world, Gretchen Haien’s images provide glimpses of history both in solid structures and shadows, invoking a sense of serenity. The spaces she has captured are absent of people but were created by human minds and hands. She has submitted a well-thought-out set of images that are intriguing to contemplate,” wrote the juror for the event.

While “Interior Frontiers” was created using traditional photography techniques (black and white), her other series on display, “Leaving: From Within,” was produced through digital imaging. Haien described the imagery in this series as a “delicate blend of light, image frame and angle of sight [that] challenges the understood and the unexpected that is trapped, or at times often buried, within our daily earthly existence.”

Haien earned a MFA in photography from Louisiana Tech University and has taught photography at Belhaven since 2007. In addition to academic duties, Haien is also the photographer/designer for Studio 4, which she opened in 1987. This venture offers creative commercial photographic services to advertising agencies and government agencies, along with architects, interior designers and private individuals.

Located in Summer Hall, Mississippi University for Women Galleries are open Monday – Friday, 8 a.m. – 5 p.m. following the university calendar. The Galleries are free and open to the public.