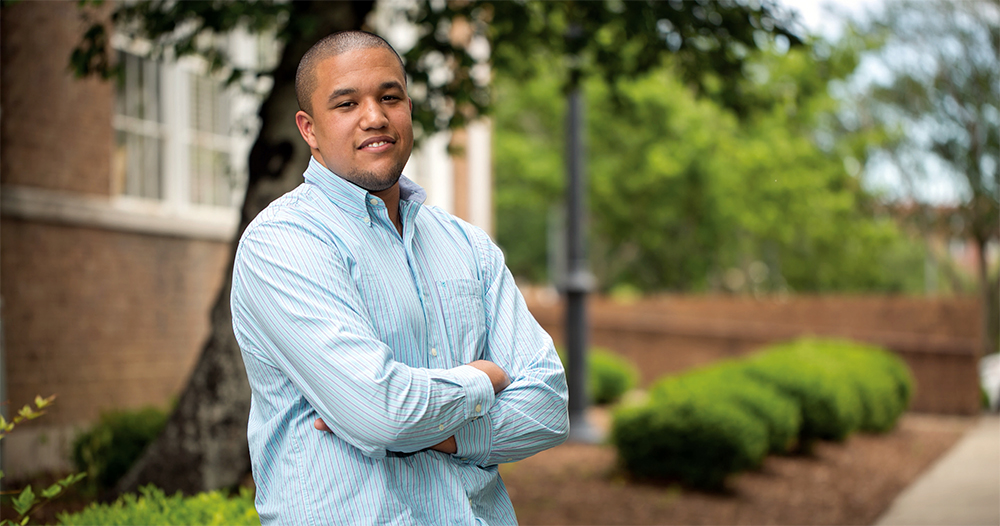 Matthew Reeves, 27, originally from San Diego, Calif., landed in Columbus in 2008 because of military duty at Columbus Air Force Base. In his military role, he taught aerospace and operational physiology, a subject focusing on issues such as disorientation and air sickness that might be experienced by pilots in the air. A medical discharge in 2011, however, forced Reeves to re-evaluate his life.

“I decided to apply to about a dozen schools in the area, the state and the region,” he said. He was accepted to all of them.

Living across the street from The W during his military service, though, had made a special impression on him.

“Everyone always seemed to be happy. I never met a person in a bad mood.” He liked that atmosphere, as well as the fact that he would not have to travel to complete a degree.

Using his G.I. Bill, he enrolled and earned his bachelor’s degree in biology in 2015. Not content to stop, he earned his master’s degree in health education in 2016. His research focused on socioeconomic status and its perceived relation to foodborne illness susceptibility, pairing his interest in science with his desire to help others.

Today, he knows he made the right educational choice.

“The environment at The W is conducive to developing students,” he said. “Teachers take the time to listen and make sure you understand. You are not a warm body in a chair. The professors are very passionate about their work.” Now married with an 8-month old daughter, Reeves is in paramedic school working for North Mississippi Medical Center and beginning the application process for medical school. Eventually, he wants to practice emergency medicine or cardiology care locally.

Looking back on his undergraduate and graduate experiences at The W, Reeves said, “Students feel they are getting the best education for the price they have paid. It feels like an investment. I wouldn’t have wanted to spend it at any other place.”